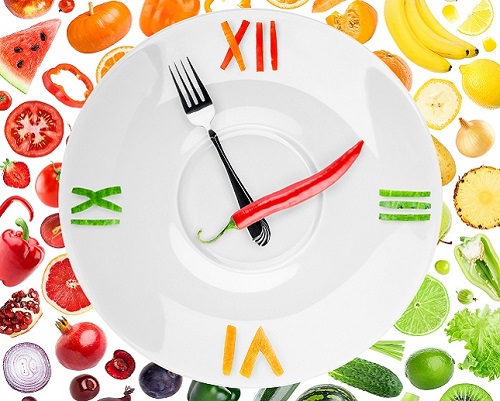 Chronobiology, or the science that studies biological rhythms, has led to the formulation of the chronodiet, a food strategy based on the time of food intake.

In short, it is not only important to ask yourself how and how much to eat but also when to eat .

Hormonal control is the assumption on which not only the chronodiet, but also most of the latest scientific research on nutrition and weight loss is based. The much loved and discussed Zone Diet is one example. According to these theories, the assimilation of nutrients and the consequent metabolic variations depend on a complex network of hormonal adjustments.

There are hormones that promote the accumulation of body fat and the loss of muscle mass and others that favor the elimination of body fat and the acquisition of muscle mass. Stimulating the secretion of one or the other hormone with the diet means reaching one's goals or not; not only that, it is important to evaluate individual hormone levels as some subjects can manifest a natural over or underproduction of certain hormones.

Time Slots for the Assumption of Various Foods

In the chronodiet, conceived in 1992 by two doctors from your country, it is recommended to take carbohydrates at the beginning of the day.


Bread and all other foods with a high carbohydrate content must therefore be taken in the morning since in this phase of the day the liposynthetic and anabolic action of insulin is counteracted by corticosteroid hormones (cortisol). Not only that, the activities carried out during the day allow you to metabolize a large part of the energy introduced with food in the first part of the day.

Carbohydrates for Lunch, Protein in the Evening

While on the one hand it is important for the supporters of the chronodiet to reduce the intake of carbohydrates in the evening hours, on the other hand the protein consumption will be increased during this period of the day.

The hormonal profile that is established in the evening favors the use of fats for energy purposes and the building of muscle mass during the night.

The following table shows the main hormones on which the chronodiet is based, for each the function and the circadian rhythm are indicated

THE EVOLUTION OF THE TIMELINE

At its origins, the chronodiet was in effect a dissociated diet, a diet that required not only the consumption of certain nutrients at particular times of the day, but also the prohibition of taking foods of different origin in the same meal (for example it was necessary to separate the consumption of carbohydrates from that of proteins).

Obviously, such a drastic method can only have some negative implications. The following table shows the pros and cons of the chronodiet.

Another important aspect to consider is individual variability, for example some people usually eat dinner after returning from work and then go to the gym a few hours later, a similar argument for shift workers, or for those who continue to late into the night; in all these cases the principles contained in the chronodieta are not applicable and also the evening meal must contain, for obvious reasons, carbohydrates in good quantities.

Also be careful not to demonize corticotropic hormones at all costs, as the main lipogenetic hormone (which favors the accumulation of fat) is not cortisol but insulin. Taking too many simple sugars (or sugars with a high glycemic index) causes at any time of the day an overproduction of insulin necessary to counteract the glycemic increase. It is debatable to say that during morning hypercotisolism it is useful to take many simple carbohydrates as hypercortisolism favors hyperglycemia which will be further increased by a meal rich in carbohydrates; increasing blood sugar means increasing insulin secretion with all the negative consequences that we have previously listed.

In addition to a facilitated accumulation of fat, hyperinsulinemia contributes to the premature onset of the sense of hunger; on the contrary, the consumption of a balanced meal, in addition to keeping blood sugar and insulin levels relatively constant, slows down digestion and helps to give a general sense of satiety.

The last point to consider is that in the late afternoon the highest peaks in body temperature are recorded and consequently the energy metabolism is very high. Therefore it would not be so wrong to continue taking carbohydrates even in the early and late afternoon, limiting them only in the evening meal.

There is no perfect diet, there are correct eating habits, there is information and there are contraindications, for these reasons the main rule is, and remains the same, to consult a specialized doctor before embarking on any diet program.

The chronodiet, as we have seen, contains several positive points that must be extrapolated and included in one's technical and cultural background. On the other hand, however, it is not without incorrect aspects and extreme concepts that must therefore be abandoned.

Audio Video The chronodiet
The yellow and orange diet ❯