The benefits of pomegranate juice 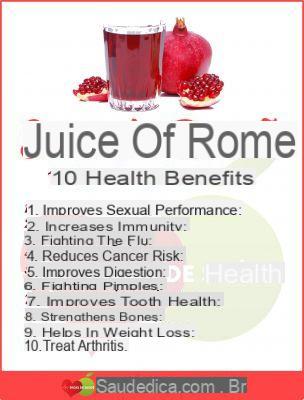 The benefits of pomegranate juice they are due to presence Vitamins, minerals e antioxidant substances, useful to counteract cellular aging, caused by the harmful action of free radicals.

These protective properties, demonstrated by modern scientific research, are attributed to phenolic component, which favors the rstrengthening of the barrier of gastric mucosa and correct functionality of the cardiovascular system.

Originally from Persia, the pomegranate was imported by the Romans into the country at the time of the Punic wars; hence the botanical name Punica Granatum. In ancient times the bark it was used for astringent properties e disinfectants (it is perhaps the most effective dewormer that exists in nature) tonic ed antiemorragiche.

Today we use hers instead juice to protect the heart and blood vessels against the onset ofarteiosclerosi and the damage caused by diseases such as cholesterol, diabetes; and to counteract thepremature aging of cells, caused by the oxidative stress.

The benefits of pomegranate

Pomegranate juice, obtained from mechanical squeezing to the beans contained in fruit, is a mine of vitamin A, complex B, lives. VS and tannins From antiodidant, astringent properties, tonic e refreshing, able to slow down the oxidative process which is at the origin of'arteriosclerosis.


Thanks also to the high content of flavonoids is considered a powerful scavenger because protects cells by the oxidizing action of free radicals, thus counteracting the process ofapoptosis and dell ' premature aging of the whole organism.

Plus pomegranate juice keeps the levels of cholesterol and sugar in the blood, thanks to the presence of phenols and inhibit the alpha-amylase enzyme.

One incorrect lifestyle, L 'exposure to UVA and UVB rays, all'air pollution, toxic substances (such as solvents, heavy metals, pesticides, detergents), water contamination, infezionand one'diet lacking in minerals and vitamins e excessive psycho-physical fatigue they weaken the organism and "age" it prematurely. All of these factors cause oxidative stress and the resulting increase in our body of reactive molecules, call i free radicals.


Normally, in good health, free radicals are deactivated by antioxidants, but they can become harmful if in excess, because damage all components of the cell, included protein, lipids e DNA, e the increase in these attacks induces incorrect codes in the genomes. The repetition of these errors causes the apoptosis o cell death.

The more frequent these manifestations are, the more accelerated theaging of fabrics of the skin (wrinkles, loss of elasticity, skin spots), of the eyes (cataracts, macular degeneration), of the brain (Alzheimer's, cerebral degeneration), arthritis and muscle degeneration, as normal human cells have a limited number of replication and eventually they go into one state of non-divisibility, named repeatable senility.

In particular, the degeneration of the tissues that make up the blood vessels can give rise toarteriosclerosis, un tissue hardening, or sclerosis, of the arterial wall which appears with advancing age, as a consequence ofaccumulation of fibrous connective tissue at the expense of the elastic component. A particular form of this disorder is atherosclerosis, characterized by chronic inflammation of the large and medium-sized arteries that occurs due to cardiovascular risk factors such as smoke, hypercholesterolemia, diabetes, hypertension, obesity.

The properties and cosmetic uses of pomegranate

> Pomegranate liqueur: how to prepare it at home

add a comment of The benefits of pomegranate juice