The ancient Egyptians were vegetarians 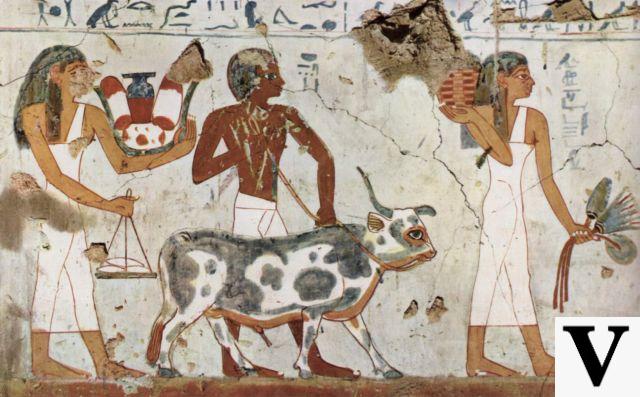 Modern vegetarians may have a lot in common with ancient Egyptians, much more than you can imagine. Yes, because archaeologists and experts think they followed a diet consisting largely of vegetables, fruit, wheat and barley.

A hypothesis that has been taken into consideration for some years for all the ancient sedentary populations. But that has now been confirmed with carbon analysis, uncovering what the ancient Egyptians really ate.

The credit goes to a team of researchers who, studying 45 mummies that lived in Egypt between 3500 BC and 600 AD, were able to establish that they followed a diet made up of a lot barley and wheat, as also highlighted by the agriculture scenes painted on the walls of their tombs.

And the fish? Little, very little. Almost absent. This data surprised scholars, convinced that fish could be a fundamental food for a people who lived along the Nile, as evidenced by numerous cultural testimonies, from mural reliefs to the archaeological remains of spears and nets, passing through commercial offers with fish. from sites like Gaza and Amama, as explained by Kate Spence, an archaeologist and specialist in Egypt at the University of Cambridge.

It is surprising, therefore, that carbon analyzes suggest that the fish has not been widely consumed. In reality, however, some texts have indicated that some species of fish were not eaten for religious reasons.


"We had an approach that was a little different than usual", has explained Alexandra Touzeau, who led the research group of the University of Lyon. “We worked a lot with bones and teeth, while most researchers have until now studied hair, collagen and protein. We also worked on different periods ".

The researchers published their results on the Journal of Archaeological Science

Blue eyes, dark skin and lactose intolerant: the European of 7 thousand years ago

add a comment of The ancient Egyptians were vegetarians