The ancient and forgotten apples

We know the types of apples that are mostly unknown today, but once used in everyday cooking.

Cooking the apples: return to the tables of the knights

In the Middle Ages, and even before, many extravagant foods were used in the kitchen that are now forgotten: just think that serving chomposte of pears or turnips was interchangeable as an accompaniment to the dishes of the nobles and lords of the time.

L'use of fruit was very common as an ingredient in savory recipes both of first courses and side dishes and second courses, while in contemporary nutrition the place of fruit has been reduced to just food to be eaten separately, perhaps at the end of the meal (moreover this causes some people to have digestive problems).

Among these foods there are apples, which are called in botanical jargon false fruit since the true fruit is the core, and I am le mele, le pere, il cotogno e le nespole. These fruits were once used not only raw and fresh, but also cooked and transformed into tasty recipes.

La apple harvest begins in summer, June-September and can continue for some varieties until the end of November. In fact, some types are precocious and are mainly used for fresh consumption, such as San Giovanni, Gala, some Renette and Gravenstein. Then, with the succession of harvests, the apples have different shelf life (or conservation) characteristics. Some types of apples are very long-lasting which means that once harvested they can be kept well and stored for a long time without spoiling.

Once upon a time there was the melaio that is, a place in the cellar where the mele serbevoli, in the cool and dark, for several months until the beginning of April. Between later apple varieties of harvest we remember the Anurca, the Durello, the Limoncina and the Gelata or Ghiacciata. The latter is one of the most storable together with Rotella (autumn ripening) and Gamba Fina (summer ripening), both of which are also excellent for cooking.

With a history also documented by Pliny the Elder and Cato, the cultivation of quince it dates back at least to the times of the Babylonian and Akkadian civilizations, and Plutarch reports that it was the goddess Aphrodite who imported it from the Levant. Its fruits are sometimes known as quince or quince pears but in reality quince is a separate and well-differentiated species that with the apple tree (Malus domestica) and the pear tree (Pyrus communis) shares a place in the subfamily of the Pomoideae.

The fruit is harvested between September and October, which, depending on the variety, can be maliform or pear-shaped, large, asymmetrical, golden yellow and covered with a dense down that disappears when ripe. The pulp is rich in sclereidi (also called stony cells, with the supporting function) and highly oxidizable, and as far as it is possible to eat the raw fruit, the slightly sweet and particularly astringent taste it makes it indigestible to most people.

Over the centuries, humans have learned how to circumvent the organoleptic defects of the fruit to transform them into great virtues: through cooking sugars express all their hidden sweetness, accompanied by unique honeyed aromas. The high percentage of pectin gives the fruit a great gelling power making it an ingredient perfect for jellies, mustards and jams and there is even a recipe for a gelatinous dessert that takes its name from it: the quince.


The word "jam" itself comes from the Portuguese name of the plant: "marmelo". The plant also boasts some uses in traditional medicines Indian, Afghan, Pakistani, where the dried fruits are used to combat cough and throat problems, inflammation, allergies and ulcers, and where i boiled seeds are used in case of pneumonia. 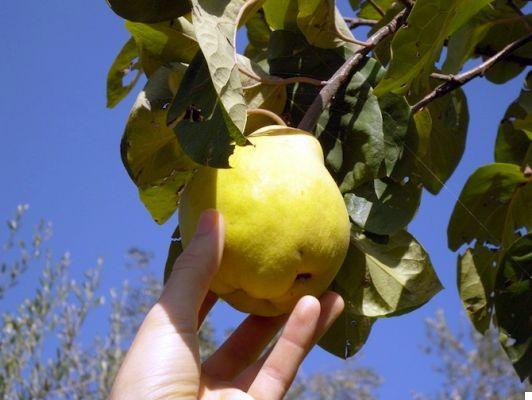 Between four regions (Tuscany, Emilia, Marche and Umbria), between the Cesenate Apennines and the Tiber Valley, a unique fruit of its kind has been preserved. Of the origins of the "Pera Cocomerina", O "Pera Briaca”, Not much is known: from time immemorial it has been left to grow isolated and undisturbed along the fields and near the ditches and only in more modern times has it been cultivated.

This small pear variety (hardly exceeds 60 grams) owes its name to characteristic color of the pulp, a rosé red reminiscent of watermelon or which gives the impression that the fruit has been soaked in wine.

The ripening can arrive in August or October and the fruit, sweet, fragrant and aromatic (reminiscent of rowan), is not particularly conservable and quickly loses its organoleptic qualities; for this it is processed in a variety of products such as jams e syrups. Given the difficult availability and the low interest of the market, this fruit can be tasted mainly at local festivals dedicated to it. 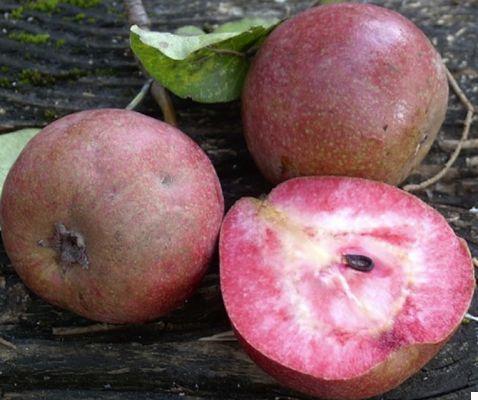 Another interesting variety of Pyrus communis responds to the name of "Pear Volpina". Also of unknown origin, it was found in the Umbrian valleys (Gubbio, Gualdo Tadino), used as a support for the rows of vines. The plant is particularly rustic, tall, long-lived, inconstant in fruiting (a typical feature that takes away the interest of the market).

The fruit is round, rust-colored, rough to the touch and particularly firm. This particular firmness causes the fruit to be supplies exclusively after cooking or processing. Generally if you use cook in wine with chestnuts or chestnut honey and spices (cinnamon, cloves, bay leaves), or in the must as an ingredient of savor, typical peasant dessert of the Romagna tradition.

In the past it was boiled in water or baked in the oven as one quince, or worked to make it jams, fruits caramelized o juices. The juice, which preserves the sourness of the fruit (rich in Vitamins e tannins), it seems it was also used to protect the teeth and the beauty of the skin. 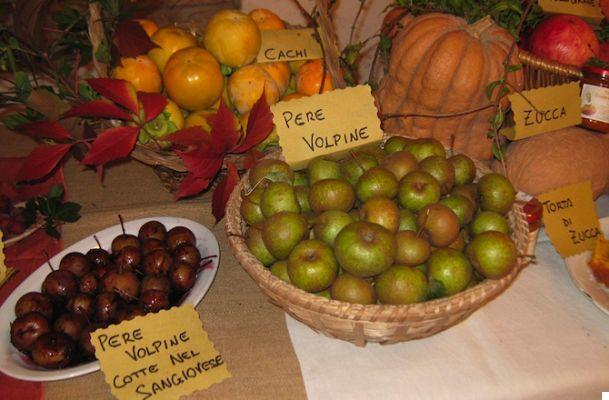 For many many years now in our markets thethe only medlar we can find it is the so-called "Japanese medlar" (Eriobotrya japonica) while the common medlar (Mespilus germanica) has practically disappeared from the fruit and vegetable circuits.

In fact it is not a fruit of simple "management": the plant is a lot rustica, particularly resistant to winter cold, but the irregular size, the low germination capacity from seed and the slowness with which it grows to reach fruiting mean that the tree does not lend itself to cultivation.

The fruit is harvested in autumn and needs a period of amalgamation in the straw before becoming edible: thehigh content of tannins it makes it unsuitable for immediate consumption, making it acidic and woody.

Once ready, the fruit has a sugary, aromatic flavor, reminiscent of nougat. This need to wait months for the enzymatic transformation of the fruit pulp is another factor that discourages the average consumer from taking an interest in this food.

Originally from areas around the Caspian Sea and known several centuries before Christ, it was very important for the Romans as it is one of the very few fruits that could be eaten in the middle of winter (it was a real reserve of sugars, fibers and vitamins B and C before the arrival of citrus fruits and much more adaptable than these to the continental climate and considerable altitudes), with febrifugal, anti-inflammatory, antidiarrheal and diuretic properties.

It was in fact the Romans who took it with them in their conquests and had it adapted to Germany, from where Linnaeus then mistakenly believed that the plant came. 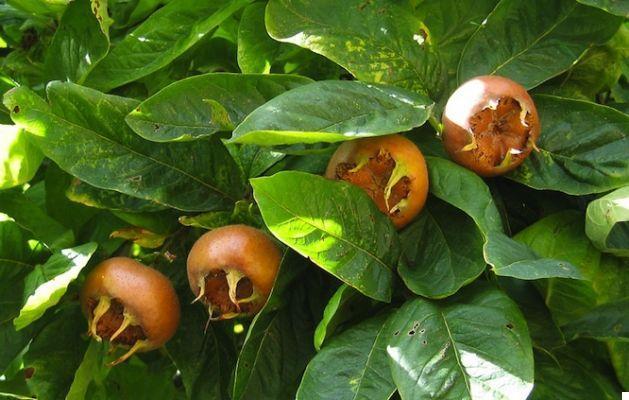 Baked apples and pears: a warm and beneficial snack

Even today an excellent snack, even for the little ones, is there baked apple! For this recipe just choose apple varieties or pears, well firm and hard. An excellent variety is the Renetta or Baeburn. The process it's very simple: just take the apples, wash them, place them on a baking sheet and leave them at 180 ° C. The cooking time, about 35 minutes, depends a lot on the size of the apples and can be evaluated since they begin to shrivel: at that point we can remove them from the oven, or the longer we leave them, the softer they become.

It is advisable to pierce the peel, here and there, with a fork so that it cooks better and can drain the excess water. The taste is very pleasant and being a warm snack in the middle of winter it is a good solution to regain warmth! There ground cinnamon sprinkled on top is a touch of excellence! 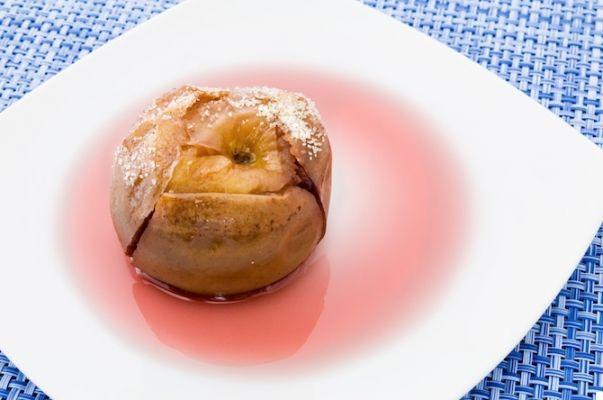 The benefits of baked apples are many:

In short: a pleasant and healthy snack for everyone!

Peponidae, apples and compound fruits: what are the differences?

add a comment of The ancient and forgotten apples