The 3 "Nos" you must learn to use in life 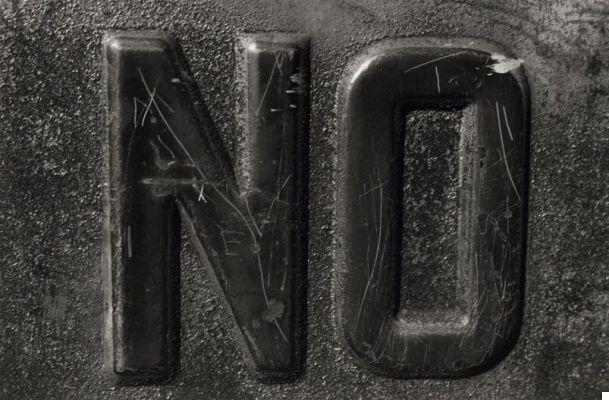 There is a good reason why "No" is one of the first words we learn to pronounce from an early age. In fact, children go through a phase of denial in which they say no to everything, on principle and without going into too much detail. In this way they reaffirm their identity. In this regard, discovering the existence of no and its implications is a big event for the child, because he realizes that he has the right to decide his life, even if initially they are only small decisions.

Learn to say no it is also important for maintaining our emotional balance. Life continually opens up new possibilities that we can grasp, tempts us with opportunities that are sometimes not the most suitable for us. In these cases, saying no means being able to stay on the path we have chosen, focusing on our goals.

Also, sometimes saying no is the only way we have to stand up for our rights and keep tabs on people who are willing to violate our freedom by taking our time and acting like real emotional vampires.

Even in the professional field it is essential to know how to manage the art of denial, above all in order not to be overloaded with tasks that do not belong to us and not to take on commitments that we cannot carry out. Of course, we must learn to say no by respecting others and maintaining good relationships.

Setting limits is also an expression of self-love

Sometimes you meet people who propose projects or make requests for which you know the answer well: an absolute and categorical no. When you have made a very clear decision and you know that what they are asking or proposing is not for you, because it can harm you or goes against your values, you must not be afraid to answer with a categorical no.

It is true that saying no is complicated, but remember that if something you don't like and it can harm you in some way, there is no reason to do it. In reality, sometimes saying no is an expression of self-love, of self-respect.

Setting limits is not negative, it is the expression of a person who knows what he wants and knows exactly how far he is willing to yield. Furthermore, a sincere no, instead of an unnecessary hesitation, is also an expression of respect for the other person because it will save them time by allowing them to quickly refocus their search. If we are not willing to do something, it is best to say it right away.

It is not always necessary to say no, but sometimes we are not willing to fully do everything the other person asks of us. In fact, these situations are very common in our daily life and, since we ultimately tend to give in, they are the main culprits for us getting involved in projects or relationships that don't really satisfy us.

If so, you can say "No" halfway through. That is, you can tell this person that you are willing to help him in some aspects, but not in others, that you can only satisfy him up to a certain point, but you are not willing to go further.

You can take advantage of this moment to indicate exactly what your limits and conditions are. The other person needs to be clear about your position with respect to their request, so that they do not demand what you have not compromised to do.

Another possibility that involves the "No" in the middle is the negotiation. For example, you may disagree with the initial request, but if the other person changes any details, you may agree. In reality, it is a very assertive strategy because that way everyone wins.

If something doesn't interest you it's best to say it right away. That way you are sincere and respect the other person. But there are times when we are simply not willing to accept a certain proposal, at least at that moment, but we may do so later.

For example, a person might offer you a very interesting professional project, but your current problems prevent you from accepting. If so, the proposal really interests you, but you can't compromise immediately. It would be ideal for both parties to agree on a reasonable period of time, after which to give your final answer.

Why are we reluctant to say no?

- Because we are afraid of being considered closed and rigid people, because in our society the yes has been associated with greater flexibility and openness, when at times it only hides a profound lack of character.

- Because it is a habit we learned as children, when we thought that saying yes meant getting the approval of others, especially parents, who used to get angry when we said no.

- Because we are afraid of burning the bridges behind us by precluding us an escape route that could be useful in the future.

- Because we are afraid of the reaction of others or of hurting them with our denial thinking that they will not take it well.

- Because we are worried about being accused of selfishness, when in reality we are only defending our right to set limits that protect us.

However, saying no is a right, especially when other people claim to have our time and resources to their liking. In fact, sometimes saying no is a matter of psychological survival, not selfishness.

The key is to say no in a way that doesn't cause harm to others. And to do so, it is sometimes necessary to explain our reasons.

Remember that a sincere no is also a way to show respect for the person, and it is always preferable to a yes that does not go through and for which we will have to apologize.

The 5 secrets of Buddhism to criticize in a positive way ❯