The 15 best TED Talks for your personal growth 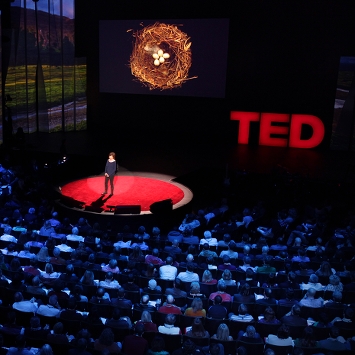 "Vulnerability is the most accurate measure of our courage."

In 2007 I was looking for some online resources for improve my English.

During one of my researches, I discovered TED.com.

The site hosted dozens of videos (today there are thousands) in English, which reported the interventions of some of the most brilliant minds on the planet, on the most varied and interesting topics I could imagine.

It was love at first sight.

Since that day I have viewed hundreds of TED talks and still today I have the good habit of watching at least 2-3 a week.

But what exactly is TED?!

What is TED (conference)

To avoid talking nonsense, I prefer to bring you the definition of TED that Wikipedia gives:

“TED (Technology Entertainment Design) is a trademark of US conferences, which began in February 1984 as a single event and became an annual conference in 1990.

Developed in Silicon Valley, the TED conference was initially focused on technology and design, but later extended its range of expertise to science, culture and academia.

Its mission is summarized in the formula "ideas worth spreading"(Ideas that deserve to be disseminated).

The speakers themselves come from many different communities and disciplines. Among the most famous speakers, TED hosted the former US president Bill Clinton, the co-founders of Google Sergey Brin e Larry Page, the trainer Tony Robbins and the founder of Microsoft Bill Gates.

In March 2016 there were approximately 2.400 TED conferences available for free on the official website. "

In short, TED.com has become a sort of free video encyclopedia that collects the best of the collective knowledge of scientists, architects, educators, entrepreneurs, etc.

The 15 best TED talks according to GetPersonalGrowth

Recently, a member of the GetPersonalGrowth Facebook group asked other subscribers what their favorite TED talk was.

Hence the idea of ​​collecting i video TED

I then decided to add some unmissable gems to the videos proposed by the readers!

Ps. I suggest you save this page as a favorite and go back to consult a new TED on the list, every time you find yourself with 10-20 minutes free. Do it now ;-)

In the mind of a master of procrastination - Tim Urban

We could not have started this list of the best TEDs "according to GetPersonalGrowth" without this little masterpiece, dedicated to procrastination, by American blogger Tim Urban!


The Power of Vulnerability - Brené Brown

I chose to open this article dedicated to the best TED talks with a quote from Brené Brown… and it was no coincidence.

Professor Brown teaches at the University of Houston and specializes in the study of human emotions such as vulnerability, courage, authenticity and shame.

His TED talk is not only very good, but also a lot of fun ;-)

Your body language determines who you are - Amy Cuddy

If you follow GetPersonalGrowth, you may have already seen this TED Talk by Prof. Cuddy in one of my articles (for example this one dedicated to laziness), but it couldn't be missing from our special playlist:

Because some of us don't have one true calling - Emilie Wapnick

As said jokingly in some of my articles and Facebook posts dedicated to the concept of multipotentiality, Wapnick has become, in spite of herself, the patron saint of cazzari all over the world.

However, this does not mean that his TED talk is one of the most brilliant of recent times and certainly deserves to be viewed.

Sir Ken Robinson is an educator and a creativity expert.

His TED Talk was one of the top 10 ever published on TED.com and currently the one with the highest number of views (nearly 48 million).


Look at it and you will understand why.

Did you like these top 5 TED talks? Here are 5 more for you.

Simon Sinek is a leadership expert, but he is also and above all a fucking genius.

This is his TED Talk. If you have the way, I suggest you also look at his other interventions around the net ;-)

Bel Pesce is a Brazilian entrepreneur with very clear ideas about the false myths related to our most ambitious goals.

Why We Do What We Do - Tony Robbins

Those who have followed me for a while know my relationship of hate and love with Tony Robbins: the American para-guru par excellence.

This is his TED Talk. To watch!

What I Learned When I Go Blind in Space - Chris Hadfield

Chris Hadfield is one of the most charismatic (and likeable) astronauts of modern times.

His TED Talk is a hymn to the exploratory spirit of the human race.

La The beams is undoubtedly one of GetPersonalGrowth's workhorses, that's why I wanted to show you this Angela Lee Duckworth TED Talk.

One of my favourites.

I also recommend that you read his book: "Grit".

Have you already found your favorite TED among these top 10? What do you say, do we also look at the last 5? Here they are:

In Praise of Slowness - Carl Honore

An acute analysis of our modern times and a "cure" to this mad race that never seems to end.

Jiang's experiment is one of those personal growth experiments that each of us should undergo, to finally overcome our fear of rejection.

Find out exactly what this "madman" did in his TED talk:

The Power of Introverts - Susan Cain

We live in a world that seems tailor-made for extroverts.

Yet introverts have extraordinary power. Susan Cain explains what it is:

How to be friends with stress - Kelly McGonigal

Are you afraid that stress can kill you? Then it probably will ...

Yet stress can also be our best friend. Like? Professor Kelly McGonigal explains it brilliantly:

Jil Bolte Taylor's is one of the most authentic and moving TED talks I've ever seen.

I thought it was the best way to close our effective playlist. Enjoy it.

I hope that you enjoyed this article, a little different from the usual, and above all I hope that you will save this page and come back to visit it every time you are looking for inspiration.

By the way, if you have your own favorite TED talk too, why don't you share it in the comments on this article?

The good (s) resolutions of the beginning of the year ❯