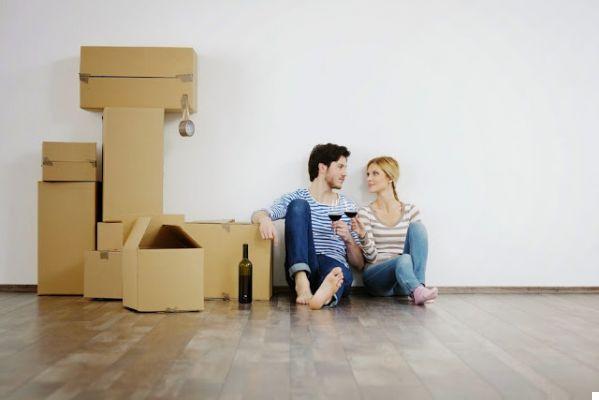 If two people have been dating for a long time, live in the same city, sleep several nights a week together and get ready for the wedding, wouldn't it make sense for them to start sharing the same apartment as soon as possible to save money? Most couples would answer yes. However, did you know that the cohabitation before marriage increases the risk of divorce?

Indeed, before signing a lease together one should ask: are we getting carried away by circumstances or have we really decided to move in together? It's not just a question of terms, but how you decide to take this step will also determine how happy you are in your life as a couple.

In support of this idea, a study by the University of Virginia intervenes, in which various factors related to marriage were evaluated, in order to predict the stability and happiness in the relationship. More than 1.000 people between the ages of 18 and 35 who had a stable relationship took part in the study.

Over the course of five years, 418 of these people got married. The psychologists examined their relationship as a couple, analyzing each of the phases, such as: the first meeting, the first sexual intercourse or the decision to move in together. They later assessed the level of happiness and satisfaction in everyday life.

In the past, the problems a couple had to go through were quite definite, we could say they were ritualized. People began to get to know each other, the man declared himself, we moved on to the engagement phase, everyone continued to live in their parents' home, then later came the marriage and finally the children. This sequence was quite strict and it is not surprising that most couples today choose not to adhere to these stages.


Today, every couple is free to choose when to move in together, when to have children and when to get married. Obviously, this freedom is good, but it also comes with risks as people are inclined to make decisions by reflecting on them less. In fact, today most people do not make decisions but prefer to be carried away by circumstances.

The data from this study show that couples who simply get carried away have poorer relationships and are less happy than those who make intentional decisions about the fundamental stages of the relationship. Therefore, these psychologists argue that how the couple makes a decision greatly affects future satisfaction.

In the course of the study, it was observed that only 28% of the couples who lived together as a result of the circumstances were happy, while this figure rose to 42% in those couples who had seriously considered the decision. It was also found that a third of people who acknowledged having started a relationship carried away by circumstances, without thinking too much, were then unhappy in marriage.

Why is it better to decide than to get carried away?

When we make a decision we think carefully about the details, we do not let ourselves be carried away only by passion, but we also analyze the more practical aspects, such as the interests we have in common with the other person or what we really want from life. Making decisions as a couple involves communicating with others, understanding their points of view and explaining ours. Therefore, these couples take a more proactive and thoughtful attitude, which will help them at other times in life when they will have to face more important problems. This attitude can be the key to feeling satisfied and happy in marriage.


However, couples who simply get carried away can end up marrying the wrong person or without the necessary maturity. Acting by inertia can lead us to make decisions that we would never have made if we had had the opportunity to think about it better, or that we would have postponed until the most opportune moment. It is therefore not difficult to understand why many couples feel unhappy and dissatisfied in married life.

Deciding, instead of letting yourself be carried away, implies a real compromise not only with the other person, but also with ourselves and with the decision taken. In fact, several studies have shown that when we make a decision, we strive to be consistent with it and we usually feel more satisfied.

moral: if you want the relationship to work, it is better to make decisions consciously. Don't act out of inertia, think and talk about it with your partner.