Tabata Training | What is that? Practical Tips 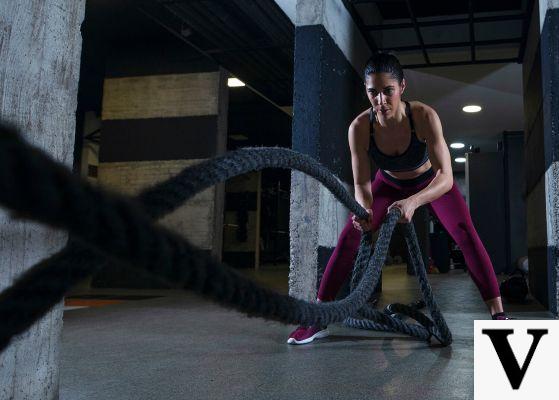 Tabata Training: What is it?

Tabata training is a HIIT (high intensity interval training) methodology that stands out for the particular intensity that is required and for its relative short duration.

The analysis must necessarily start from here, Tabata's research is relatively few and the effects and benefits are similar to those studied for HIIT.

So what is interval training? In short, it is a training methodology that involves two phases in succession: an active one in which the aim is to increase the heart rate (HR) and a recovery one in which the HR will lower. So if, for example, a normal cardio session will include an intensity of 65-70% of the HRmax (lipolytic band), an interval training workout will include peaks at 90% and an active recovery until the HR drops to 60% (for example sprint and then mild running or rest). HIIT is characterized by being a rather intense form of interval training in which recovery is typically active.


In fact, cardio (based on logic) must be programmed according to the HR goal to be achieved. It is true that the scope of application is mostly for the purpose of increasing the energy balance (i.e. the Bodybuilder does cardio rather as an aid in weight loss) however we can really exploit the advantages that are given to us by the same, only when we plan and set goals to be achieved in terms of performance improvement (which in cardio has a very strong transfer even in exercise with weights as well as in the efficiency of the subject's metabolism even at rest!). [7]

So, let's get back to us for a little parenthesis. What are the advantages of HIIT and is it actually better than LISS (low intensity steady state, therefore cardio in the range)? Difficult question and difficult answer. As I said above, we must first understand the purpose. Where cardio is done in order to increase energy expenditure, things do not change, except that HIIT is a more "time saver" methodology. If, on the other hand, we want to do things well done, then add the extra subtlety, then I am of the opinion that HIIT is the best solution, except in particular circumstances (extreme or very prolonged phases of underfeeding for example). But where does the usefulness of HIIT come from?

First of all, let's avoid a misunderstanding. Lipolytic cardio isn't what actually burns the most fat. In fact, what matters in general is the energy balance. It is true that with HIIT you rely on an anaerobic system during high intensities, therefore using carbohydrates as an energy substrate.


What matters, however, is that there is a moment in which the body goes to recover the caloric GAP through the energy reserves deposited (ie fat). This moment is, both during active recovery and in the post-workout period where we witness an increased EPOC (higher oxygen consumption) [1] [2]. So in simple terms that caloric GAP (which is greater in HIIT) is in both cases recovered through lipids. In fact, research says just this: HIIT has proved superior to moderate intensity aerobic activity [3] [4] [5] also in terms of effective weight loss [6] [7].

Tabata Training, as mentioned above, is a HIIT methodology conceived during a 1996 scientific research by Dr. Izumi Tabata and his team at the National Institute of Fitness and Sports in Tokyo. The team compared two different protocols, one involving 60 'of aerobic activity at 70% of VO2Max; the other a 4 'total interval training consisting of 20' 'cycles of performance at 170% of VO2Max and 10' 'of rest. The group that experienced the Tabata achieved a 14% increase in VO2max and a 28% increase in anaerobic capacity (in contrast, the group using the LISS potocollo had a 10% increase in VO2Max without, logically, improvement in anaerobic performance) [8] [9] [10]

"The 14% increase in VO2max in just six weeks was one of the highest values ​​ever recorded in exercise science" (Izumi Tabata) [11].

Other researches have been carried out on Tabata [12] [13] which confirmed the benefits and superiority compared to a traditional protocol. But this is not surprising given the premises we have made on HIIT cardio. But how does Tabata Trining differ from a HIIT protocol?


- First of all it is a protocol that provides for passive recovery, therefore in the 10 '' of rest you actually rest without practicing any mild activity. However, recovery times are very short.

- Secondly, it is a very short protocol (4 'total) which therefore takes the typical “time saving” characteristics of cardio HIIT to an extreme.

- It is a very intense and advanced protocol. The 20 '' of activity are extremely intense and must be known how to best manage by the athlete.

Here we come to the heart of the matter. First of all the How. Tabata is a very intense protocol so you must practice a warm-up that is long enough to allow us to easily bear the high intensities we will arrive at. 10 'of warm-up (between general and specific) is the minimum. The protocol must also be followed by a cool-down, therefore a cool-down of another 5-10 'at gradually milder intensities.

The protocol is best done on machines or with complex and multi-joint gestures that allow us to reach high HR with less muscular effort. This is why I generally recommend varying them in order to avoid as much as possible the economy of the gesture and the specialization that would be incurred by focusing on a single machine / gesture.

I'm talking about gestures because the Tabata can also be used with traditional exercises with weights (bench press, squat, jump squat, overhead press and, if you are able, snatches and Olympic gestures), you would essentially arrive at a particularly short and dense with metabolic training (here too, future article).

When? When you are advanced in the first place, especially if you are using free exercises. You have to get there gradually because it is not for everyone to reach and manage high intensities in just 20 '' (with 10 '' of recovery then).

In general, the Tabata is an excellent method to be exploited in periods of overeating to maintain a high level of activity and metabolic function (especially where a medium or medium / low training volume has been set).

In periods of undernourishment it can be more harmful than beneficial. So no, it's not a weight loss workout, or rather it is, but not in the commonly understood sense.

Because? Basically traced back to When. The ideal purpose is to improve functionality and yield with high densities. I had excellent results by having it used on gestures to be improved (in which the form was already sufficiently acquired and managed).

In separate sessions also placed on the same day in which the target muscle was trained (for example chest workout in the morning and Tabata Training with Flat Bench in the afternoon) but here it is always a question of evaluating the condition and training chosen for the athlete.

However, it can also be used on machines or exercises that involve multiple muscle groups (elliptical, cycle ergometer, etc.) to improve systemic metabolic function (in this case the transfer is very large and allows performance improvements in several aspects and gestures).

In conclusion, the Tabata is an excellent weapon that can be used for different purposes, but above all an excellent way to improve one's feeling on specific gestures and movements. As usual then .. Mix it up!

Audio Video Tabata Training | What is that? Practical Tips
Treadmill For Weight Loss | Does it really work? ❯

add a comment of Tabata Training | What is that? Practical Tips