Swing With Kettlebell | How is it done? Variants

The swing is the main movement of kettlebell training. Before delving into the execution of this movement and the possible variations, it is necessary to understand what a kettlebell is and what its origins are.

This tool, traditionally called "ghira”In Russian, is composed of a spherical weight including a handle.

Nowadays on the market it is possible to find 4 kg or even 54 kg kettlebells.

Born in Russia, initially used as a counterweight for scales, it was later used by men in order to test their strength.

The task was to raise the tool above the head as many times as possible. From this moment on, this tool was used by Russian soldiers as an element of physical preparation.

To date, training with the kettlebell has been an inspiration for the reproduction of movements such as momentum and jerk even with the use of the barbell.

Having carried out this premise, let's now try to analyze in as much detail as possible the most important and probably the best known movement that can be performed with this tool: the swing.

The first element to highlight is what trains this movement.

The greatest focus is placed on the posterior kinetic chain: we therefore refer to the muscles of the back, buttocks and hamstring muscles. In the initial phase of the movement, the push is also given thanks to the intervention of the muscles of the trunk and arms.

It is a pendulum movement, of the oscillatory type, where in order to maintain qualitative execution, it is essential to control breathing, without ever losing control and contraction of the lumbar-abdominal tract. 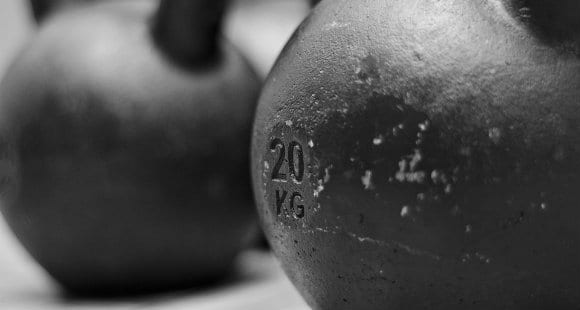 A further element not to be forgotten is the postural structure.

The back, throughout the ROM of execution, is straight and taut. Furthermore, the feet are constantly in contact with the ground with the whole plant.

As for the arms, remember to always keep them straight.

The shoulders must also be kept relaxed and depressed, without risking to call for the intervention of the trapezius as well.

The grip of the hands must be very firm. This is because during the final concentric phase, the kettlebell ball must not cross the line of the arms.

The clean execution of the motor gesture in question requires a climb up to the height of the pectoral. This is because pushing beyond the tool increases the risk of injury.

Execution then occurs in this manner. 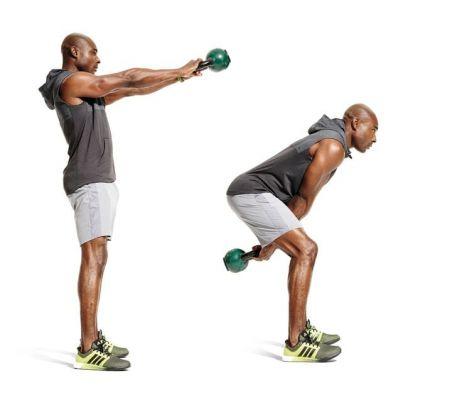 The swing is a movement whose mental and proprioceptive demand is very high. It is not recommended to try to perform other movements with the kettlebell without first having acquired a good command of this gesture.

The energy demand is very high but to improve strength, power and endurance it is an excellent exercise.

Furthermore it's a great way to learn how to activate your back muscles and thereby elevate your mind-muscle connection. Another factor on which the swing plays is that inherent in breathing. In fact, it teaches you to control it, sometimes even forcing you to force it to make it match the eccentric or concentric phase.

Despite this, it improves respiratory mastery even during everyday activities. 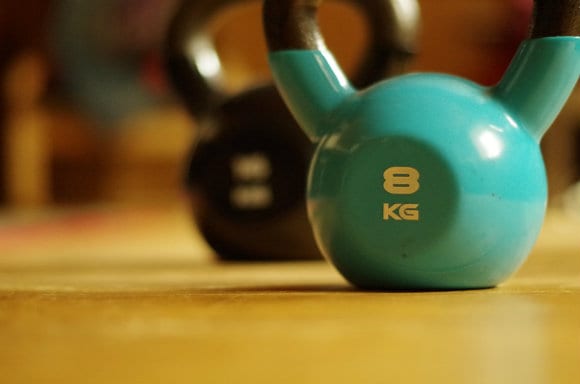 A variation on the classic swing is the American one.

It is mainly used in Cross Training, and the purposes are to extend the movement up to the head, thus generating more power. The debate on this question is very wide for the aforementioned reason: raising the arms too much would risk a compression of the rotator cuff muscles not just.

Before being able to master this gesture with simplicity, it is very important to perform a preparatory period during which your trainer will have the foresight to treat and make you learn the required motor gesture through repetition. You need to have patience in that it is a complex movement.

Once you learn, rest assured that the benefits will be numerous.

Audio Video Swing With Kettlebell | How is it done? Variants
Tabata Training | What is that? Practical Tips ❯

add a comment of Swing With Kettlebell | How is it done? Variants