Suspension Training | What's this? Why practice it? Examples of Exercises

Without going into the details of the types of training, this article aims to briefly explain what the suspension training, what are its advantages and present a short example of full body training.

First of all, let's define what suspension training is: as the word itself says, it is a "suspension training", that is, it is propose a free body functional training situation where the points of support during the exercise are not solid with the ground, but usually bound to a structure through suspension tools.

The main instrument on which one relies in this case is the one known by the name of its brand, the well-known TRX © (of which in reality there are many more or less economical versions but with the exact same geometry). 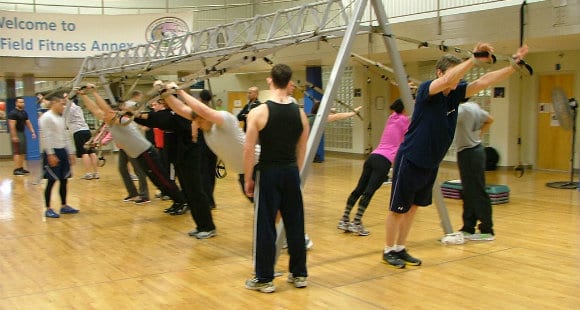 It is for those who do not know it a strap, which in the terminal parts presents two handles (to be grasped with the hands) and two stirrups (useful for binding the feet in case you choose other types of exercises).

This strap is then passed inside an eyelet which is the terminal part of the strap that is secured to the structure (some types are equipped with an "anchor door" to be connected to common house doors, to be usable also by users "housewife".

The answer is simple, it cannot be said that it is the functional training par excellence as there are other equally deserving tools, but for sure, with this type of training, all three work plans can be exploited very well, making the use of the core essential for ANY type of exercise you want to perform: the instability element introduced by the suspension makes the work of the core central to any other muscle group.

Just think of a trivial plank, performed with all the supports on the ground and the same exercise performed with the elbows on the ground but the feet in suspension tucked inside the stirrups: while when they are resting on the ground, our concern is to maintain the physiological curves of the back, with the main involvement of the rectus abdominis muscle, when our feet are suspended, we should also stabilize the oscillatory movement, calling into question the obliques as well.

All this, simply by considering an isometric exercise.

There are many free body exercises who have their alter ego in suspension, one of them being the push up. Let us pause therefore to the analysis of this exercise which presents two main variants, which in turn can be modified into infinite sub-variants.

(Unfortunately, the coding of the exercises depends on the school and the training path followed, therefore, it is likely that the same exercise may have other names).

? Suspended push up: this is the classic push-up performed with the feet on the ground and the hands held on the handles of the TRX. The load of the exercise depends on the inclination that is maintained with the floor, the more the feet are distant from the perpendicular to the handles, the more complex the exercise will be. 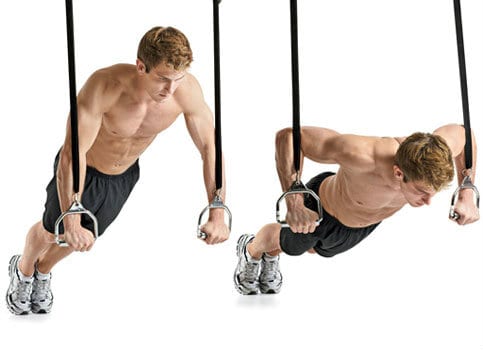 ? Fly push up: it is the bending on the arms performed with the feet tucked into the stirrups of the TRX and the hands resting on the ground in the canonical starting position. 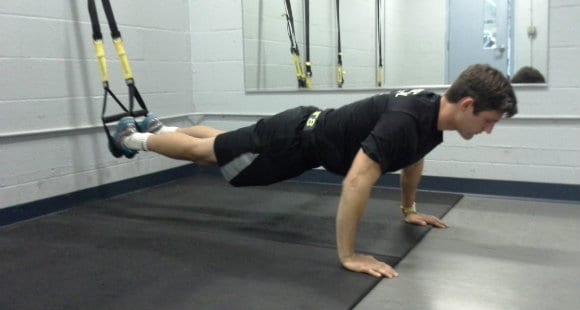 However, this methodology does not always serve to insert a further degree of difficulty: Sometimes, suspension training can be used to perform bodyweight approaches, as in the case of the pistol squat.

It is not easy for everyone to perform a squat in monopodalic support, both for reasons of mobility of the ankle joint and for reasons of strength. Run for example un pistol squat keeping the support on one foot but helping in a conscious way by keeping the handles of the instrument, it allows to perform the exercise with a lower load and to stop the descent where our ankle prevents further lowering without lifting the heel.

Example of a full body workout

Without going into too much detail, a simple training routine will be proposed below using in suspension, using a flow that is easy enough so that the exercises are performed in a concatenated and smooth way.

? Fly push up (described above)

? Pike: from the plank position maintained by putting the feet inside the stirrups and keeping the hands on the ground, the hip is flexed as much as possible assuming a sort of "dog position" deriving from yoga, with the head slipping between the arms outstretched. Once reached the maximum flexion it relaxes returning to the starting position. 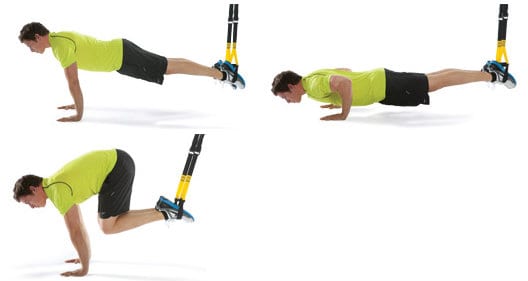 ? Rowing: classic exercise of the equipment room re-proposed in a "bodyweight" perspective with the help of the TRX where it is necessary to grasp the handles with the hands and unbalance (without deactivating the core muscles) backwards.

Starting from an initial position with arms extended, a traction movement is carried out keeping the elbows tight until the hands reach the chest (exhaling), and then conclude the repetition returning to the initial position, very carefully not to flex the hip. 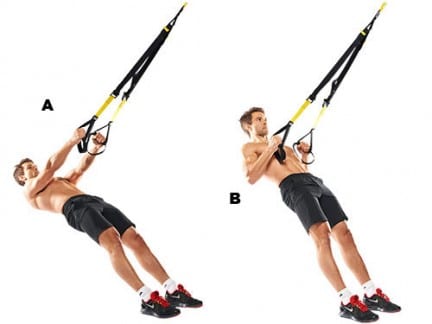 ? Jump squat: maintaining the grip of the handles of the previous exercise, the predetermined number of squat jumps are performed (which in the concentric phase include a jump phase with landing on the toes). The TRX straps must remain tensioned in the jump phase, allowing for an assisted and easier landing.

As anticipated, this is nothing more than a brief summary of introduction on a very important topic in the branch of functional training! Have fun!

Audio Video Suspension Training | What's this? Why practice it? Examples of Exercises
Swing With Kettlebell | How is it done? Variants ❯

add a comment of Suspension Training | What's this? Why practice it? Examples of Exercises