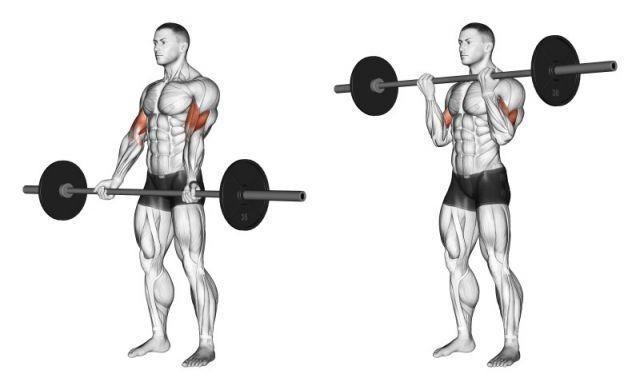 The starting position sees the athlete standing upright, with the knees slightly flexed, the step paria at the distance between the shoulders, the back in its position of strength, the shoulder blades adducted, the shoulders extended and adducted, the elbows extended. . The handle is supine shoulder-width apart and the barbell rests on the quadriceps. The wrists are straight or flexed, but never extended; if they are flexed, the contribution to elbow flexion is reduced by: superficial flexor of the fingers, radial flexor of the carpus, ulnar flexor of the carpus and long palmar. The execution consists in flexing the elbows taking care not to change the position of the rest of the body. The movement ends at the maximum level of flexion of the elbows. Flexing the shoulder is considered cheating as is helping by extending the knees or moving the pelvis under the bar. Athletes with a large waist circumference should start the movement with their shoulders more flexed than normal, to allow the bar to pass in front of the abdomen without having to flex the shoulders once the repetition has begun. This is the basic exercise for the brachial biceps. By emphasizing the isometric contraction at the end of the concentric one, the involvement of the brachialis increases. Using a wavy barbell and supine / neutral grip increases the contribution of the brachioradialis to elbow flexion and reduces tension on the medial bundles of the long head of the brachial biceps, short supinator and long extensor thumb, as supinators of the thumb. forearm.