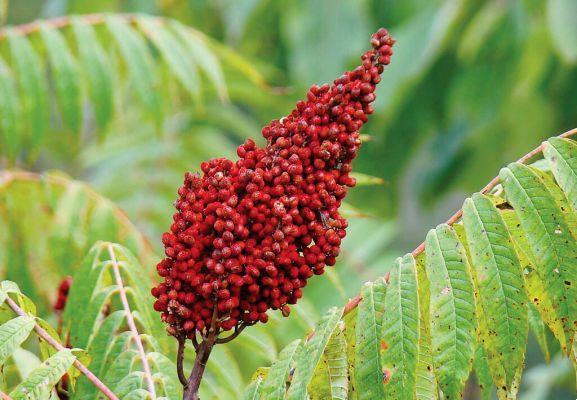 Il sumac (Rhus coriaria) is a shrub plant belonging to the Anacardiaceae family and native to southern Europe and the countries of the Middle East.

Not to be confused with that of American sumac or Virginia sumac (Rhus typhina), used for ornamental purposes, the sumac plant can reach three meters in height, has compound leaves and a characteristic panicle inflorescence.

The use of sumac dates back thousands of years: in the countries of origin, in fact, the purple powder obtained from the berries of this plant has always been used in cooking as a spice, as well as as a natural remedy in traditional medicine.

Until the mid-900s the Sicilian sumac it was also widely used for the tanning of leathers thanks to the presence of tannins and in the dyeing industry, to color fabrics.

Today, while still being very widespread in the country in a spontaneous state, sumac is almost no longer used and is considered a weed. In nature it is possible to find sumac in poor and arid soils where this shrub can cover quite large areas.

Use of sumac in cooking

Rhus coriaria is the only species of Rhus that can be used as a food, adopting some precautions. The fruits of all varieties of Rhus are in fact toxic when eaten fresh.


To overcome this problem, the fruits of Rhus coriaria are collected just before ripening and left to dry so that they lose their toxicity.

The fine powder, delicately scented with lemon, is then used for to flavor fish dishes.

Sumac has a slightly citrusy, pungent and spicy flavor and can also be added to hummus, salad dressings or rice.

Combining the sumac with dried thyme and sesame seeds to prepare it zaatar, a typical blend of Palestinian origin that is used to season meat.

Thanks to its particular and decisive taste, sumac can be used as alternative to salt, promoting regular blood pressure.

Properties, benefits and contraindications of sumac

The therapeutic use of sumac is as old as the use of the spice in cooking. There sumac powder it was once recommended against pain for its anti-inflammatory properties.


The sumac also plays an extraordinary antioxidant action date from presence of gallic acid. The antioxidant properties are useful in fighting the damage caused by free radicals responsible for cellular aging and help prevent various diseases, including
which tumors.

The sumac powder has then antibacterial properties and traditionally it was used to resolve gastrointestinal disorders and to lower fever.

Although sumac boasts numerous health benefits, it is still recommended that nodo not exceed in its consumption since in high doses this drug can cause disorders and damage to the gastrointestinal and renal systems.

Sumac can be purchased in the most well-stocked herbalist's shops or in specialized online stores and the price is about 50 euros per kilo.