Today we talk about a series of complementary exercises a squatting, lunges e press, known as Leg curl, very useful for training the hamstring muscles and which can be performed with the aid of a special isotonic machine, or (even at home) with dumbbells and other easy-to-use tools.

Anatomy of the hamstring

It is the muscle that occupies the Posterolateral part of the thigh and that, together with two other muscles, the semitendinosus and semimembranosus, constitutes the hamstring group.

Its important function is that of flexion and extension of the thigh (in antagonism with the quadriceps femoris, the large anterior muscle group); it is in relation, in its upper part, with the gluteus maximus muscle, in its anterior part with the adductor magnus muscle, while at the bottom it delimits the upper-anterior part of the popliteal fossa (ie the cavity behind the knee).

Il Lying leg curl  it is the most classic of the machine exercises; must be performed by lying in place property, ankles resting on the pads in a position indifferently flexed to the back or to the footbed. 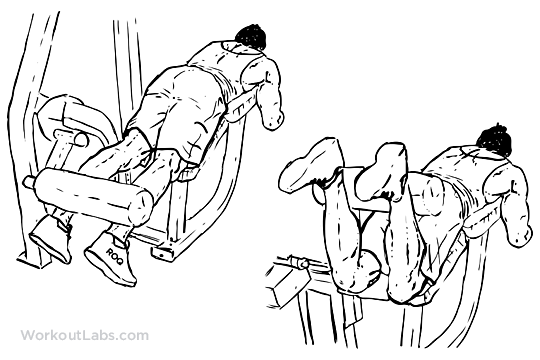 Lo Standing leg curl  it is the variant of the previous one but in position erect and its only different characteristic is that of being unilateral, because it obliges the use of one limb at a time in the execution. It is recommended for beginners precisely for this peculiarity, as it allows those approaching the machine for the first time to perform the exercise correctly by focusing exclusively on the movement of the muscle. 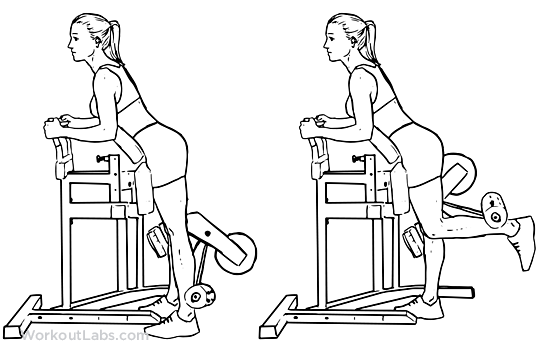 Standing, ankles resting on the pads, bend one of the knees to 90 degrees, with the foot in dorsiflexion, taking care to extend the hip well, as in the previous exercise, as the breathing remains the same. Return to the starting position and repeat with the other knee

Il Seated leg curl instead, it is performed from position sitting, the machine used is different from the classic one and the exercise has the same characteristics as a reverse leg extension. 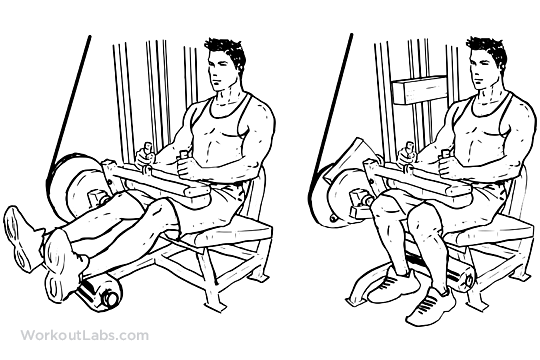 From a sitting position, with the ankles flexed and resting on the pads, extend the leg making the knee reach an angle of about 100 degrees. Breathing is identical to the previous exercises

Some variants are possible without the machine.

1. Standing upright with the anklets al low cable, for example, very useful as a final workout on the day dedicated to the legs.

2. In position property su panca with the help of handlebars which must be held between the ankles, in a perfect simulation of the Lying leg curl to the car.

3. Da lying in place supine with the Swiss ball : on the ground, arms extended and rather spread apart to seek stability, the legs are stretched on the ball with the heels firmly fixed approximately in the middle of the Swiss ball.


Only the upper back rests on the ground (the basic exercise resembles that of bridge, a useful exercise in proprioception and core stability with natural load); once the core is stabilized, the ball is pushed hard and, by contracting the hamstrings, bring the heels as close as possible to the buttocks.

Progressively the use of the arms on the ground as a support point will be abandoned and you will have to perform, arms to the chest, with the only aid of the hamstrings. Remember that the line that goes from the knees to the back is always straight, the pelvis must never be lowered, the knees arrive in the high phase of the execution to look at the ceiling. The best can do it monolaterally, that is, with only one leg.

4. Same mode of execution but to the TRX, inserting the feet up to the heel firmly in the stirrups. Also here be careful to keep the pelvis in line with the torso and not to swing sideways: as with the Swiss ball, since there is no help of the machine to "guide us", the concentration to isolate the contraction movement of the hamstrings must be maximum.

The Leg curl, as we have seen, is an excellent exercise to increase the trophism of the hamstring muscles, however it is not free from contraindications to those who present poor muscle elasticity especially at the level of the hip or the hamstring itself; it would be important in all cases to verify, with specific elasticity tests, the flexibility not only of the hamstrings, but also of their antagonists, the quadriceps, which, remember, work in synergy in the movement of flexion and contraction of the legs.

However, the important thing, unless there are already evident and detectable hip joint deficits or significant lack of muscle elasticity of hamstrings (cases in which the use of strength machines, in particular, would be strongly discouraged) is to perform pre and post workout stretching exercises to avoid any danger.