Squats: how to protect the knees 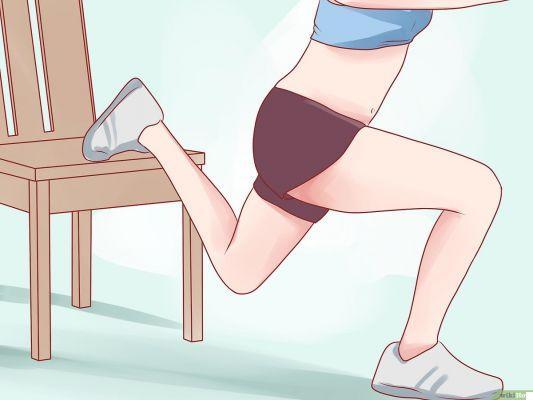 - squatting they are one of the best known exercises practiced by anyone who wants to train the lower body, because they make you work glutes, quadriceps and hamstrings.

However, all the benefits that squats can bring are non-existent if they are not done correctly. Furthermore, inadequate posture can lead to injuries or injuries, especially to the knees.

To avoid that every effort is in vain, and to avoid more serious problems, the first thing you need to pay attention to is the direction in which you point your feet while making the movements typical of this exercise.

Squats: how they are performed

there different versions squats, but for beginners it is better to start from that base. Once you have a good dose of confidence and a satisfactory level of stamina, you can make the exercise more difficult by using a resistance band or holding a outrigger or dumbbells.

These tools increase the strength necessary to perform the exercise and consequently the work on the muscle groups involved.

Make a number of repetitions indicated for your training level and gradually increase them over time.

A common mistake that most beginners make when squatting is putting weight on their knees when going down. However, this can add extra tension to the joints and lead to a variety of pains or injuries.

If you have reduced ankle mobility, you can squat by placing a small weight or book under your heels to lift them slightly.

How to position your feet during squats

Before you start doing squats, to protect the knees it is necessary check the position of your feet. The correct posture expects them to be shoulder-width apart and with the fingers pointing forward, not sideways, as often happens.

In addition to various experts, this is confirmed with certainty by a study published in December 2013 in the Journal of Human Kinetics, according to which toes pointing forward place less strain on the knees and lumbar spine. This, in addition to improving the results of the exercise, also significantly decreases the chances of injury or injury.

Specifically, the study found that pointing the toes inward or outward by 30 degrees or more could lead to a increased risk of knee injury compared to a squat with the toes pointing forward. The reason for the increased risk would be that rotating the feet can put additional pressure on the tendons, ligaments and cartilage of the knee, particularly the meniscus.

There is a tolerance threshold

However, if you find that you instinctively tend to point your fingers slightly outward, there is no need to be alarmed. According to experts it can happen and, above all, within a certain threshold it is abundantly tolerated. Indicatively, in order not to develop long-term problems, it is correct to say that although the feet should remain straight, they may also tend slightly outwards, approximately 10 degrees.

Especially for those who practice sports not at a competitive level but only to keep fit, in fact, the fundamental aspect to be taken into consideration, in addition to a correct posture, is the feeling of comfort you get when performing an exercise. For this, it is necessary to combine a correct position with one that is considered to be as natural as possible.


Despite the recommendations, however, it is not uncommon to see videos in which personal trainers or rather trained sportsmen perform squats with their toes pointed outwards much more than 10 degrees. However, this is an example not to be followed, unless under the strict control of an expert who evaluates the individual case, because despite this choice it allows you to recruit more muscles and lift higher loads, as mentioned it also involves the risk of knee problems in the long period.

Imitating the posture of other sports

Another rather popular theory, aimed at those who practice certain sports, is that of approach the position of the feet when performing squats to that which is assumed in one's own discipline.

For example, a footballer should hold a wide stance, with the toes pointing slightly upward for better traction. Sprinters training on the track, on the other hand, should simulate the position held in the starting blocks and then squat and stand with their feet shoulder-width apart, toes pointed forward, and squat to a depth of at least 90 degrees.

Mistakes in performing squats can be the cause of hot knees after training.

Audio Video Squats: how to protect the knees
The 5 best sunscreens for hair 2021 ❯

add a comment of Squats: how to protect the knees