Squat pulses | How are they performed? Muscles involved and common mistakes 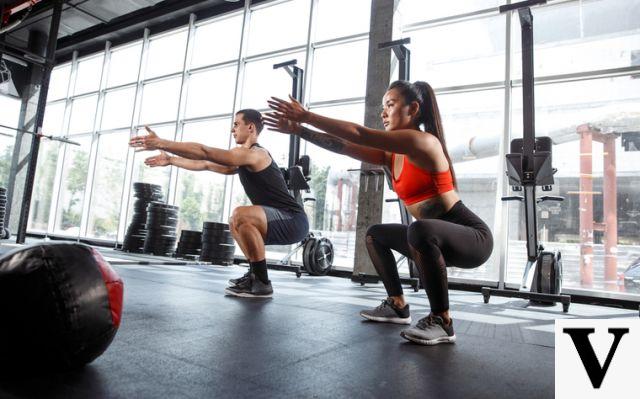 By "squat pulses" we mean a repetition of a portion of the ROM of the squat exercise for multiple repetitions.

The part of the ROM chosen is the most demanding one, i.e. from parallel or slightly below up to the half squat part, i.e. when the thighs reach about 60 degrees (go up to about halfway from the bottom squat position).

The reduction of the ROM allows to maintain constant tension on certain muscles that work more in that part of the ROM.

Squat pulses can be performed both with free body and with additional weight.

It lends itself well to many contexts, from a stage of a HIIT workout to an auxiliary exercise in a power lifting card to a core exercise in a body building card.

The described exercise of squat pulses will refer to the variant with the barbell.

The squat pulses refers to a ROM part of the squat movement but not to the squat variant. Nobody forbids using this exercise with front squats or overhead squats.

In these two types of squats, the variable of the shoulder girdle muscles is more involved, which have to work hard to keep the barbell in position.


Taking the high bar squat as a starting point, the execution is as follows:

The advantage of insisting more on a ROM class of an exercise is to become stronger in this part of the ROM.

The increase in strength is due to several interrelated and unrelated factors.

These aspects are beneficial in terms of strength and hypertrophy and consequently in the field of power lifting, body building or both.

The muscles involved in the mid-final part of a squat are ...

These are eccentrically and concentrically loaded first for reduced joint excursion.

The position also coincides with that of greater effort as the pelvis is flexed over 90 degrees with the thighs parallel to the ground.

If the aspect of bringing the butt back and then forward is emphasized, the buttocks work more than the hamstring.

These are found to work in the knee flexed position at 90 degrees and then at 60 degrees and consequently the most challenging part.

Going too far below 90 degrees of flexion (therefore lower than parallel) reduces the involvement of the quadriceps because they are in excessive lengthening.

The proposed ROM, on the other hand, combines maximum effort with good fiber elongation

These, depending on the inclination of the trunk, are recruited in an important way.

Depending on whether the variant chosen is front, high bar or low bar or even overhead squat, the trapezes must help maintain the position of the shoulders together with the lats that help prevent a flexion of the trunk.

Aside from an incorrect execution of the squat itself, the most common mistake of squat pulses is bouncing between the parallel position and the half squat position.

The movement must constantly be the result of the contraction of quadriceps and hip extensors.

Time does not necessarily have to be 5 seconds but you must have full mastery of the movement.

The only movement is in the pelvis and quadriceps while the rest of the body remains in trim.

As we have seen in this article, the squat pulses is an exercise that allows you to improve your strength and endurance. Attention must be paid to the execution of the exercise to avoid any possible errors.

Audio Video Squat pulses | How are they performed? Muscles involved and common mistakes
Deadlifts | 7 Variants You Must Know With Execution ❯

add a comment of Squat pulses | How are they performed? Muscles involved and common mistakes