Sprouts to feed on energy and vitality 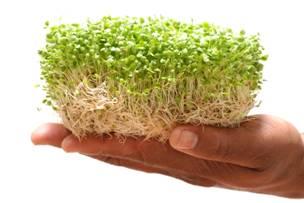 With the term "sprouts" we intend to refer to the sprouted seeds of cereals, legumes and other plant species of which everything is used: grain and sprout.

Sprouts are an example of Nature's extraordinary ability to produce energy, a capacity that can be exploited by every consumer to obtain fresh food at low cost, rich in nutrients such as vitamins, enzymes and trace elements, and easy to digest.

Since ancient times, many peoples have used germinated grains and developed sprouts as regenerating and therapeutic food and have handed down their use. Already in the "Pen Tsao" or "Great Herbarium of Chinese Medicine", about 2700 years BC, the raw soybean sprout was recommended for edema, knee pain, cramps, digestive disorders, "weak" lungs, spots on the skin and diseases of the scalp.

It also appears that Attila's fiery horses and swift Arab steeds were fed sprouted wheat seeds before important occasions. In the nineteenth and twentieth centuries, it is above all the stories of the missionaries that inform us about the use of sprouts among the populations of China and India.

Today this food has also been "discovered" by us Westerners precisely because of its great nutritional richness: very easy to prepare, cheap, with tasty and varied flavors, the sprouts are a real mine of nutritional principles which, especially in this age overabundant of foods refined, sterilized, full of additives of all kinds, they constitute a factor of prevention and defense of the vital processes of the organism. If we consider that the maintenance and strengthening of the body's natural defenses, and therefore the defense and improvement of health, first of all require a balanced diet rich in fresh and genuine vegetables, we understand well the importance of the consumption of seed sprouts. of various types, such as cereals and legumes, naturally coming from organic crops.


Raw grain or legume seeds are inedible and indigestible; therefore they must be cooked to make them edible and assimilable: the heat, in fact, transforms the starches into simpler carbohydrates, the proteins into more soluble fragments, and so it is possible to use them for our diet. With heat, however, the "life" that is present in the latent state in the seed disappears: in fact, a seed after cooking is no longer able to germinate. Instead, sprouting allows you to eat those same seeds raw, providing rich, vital and nutritious foods, in which the "potential" energy contained in the seed is released and is transformed into energy that can be assimilated by the body. The sprout is in fact a fresh food, which can be eaten raw, rich in nutrients such as vitamins, enzymes, trace elements, essential amino acids; it is easy to digest, it is free of waste because it is used in its entirety, it is tasty, it is easy to prepare and store.

Once prepared for sprouting, the whole process takes place without us having to intervene: there is no work to be done, only time works. In fact, immediately after the seed has been soaked, the "germination" begins, that is the activation and revitalization of the seed germ, called embryo, which represents the young seedling and contains in "nuce" all the essential parts of the future. plant (stem, leaves, rootlets). During this phase, when the sprout is still very small and is enclosed within the integument, therefore not yet visible, profound changes occur in the structure of the grain and in its biochemical composition. As the grain absorbs water, the seed swells and the shell cracks and the small sprout begins to grow and become visible on the outside as a small seedling in which, as a result of complex enzymatic reactions, the reserve substances (starches) of the seed, contained in the nutritional tissue inside the cotyledons, are transformed and mobilized, then absorbed by the embryo which becomes gradually larger becoming a "germinative plant", the Sprout, which if planted growing would give rise to a new seedling, identical to the mother plant.


It is precisely during the transformation of reserve substances that the numerous and complex biochemical transformations, not yet fully clarified, take place, which give the sprout its richness of substances: it becomes a real treasure trove of nutritional principles, which are more easy digestion and assimilation by the body; and this is why sprouted grains and legumes are much more digestible - even raw - than their original seeds, so they are also recommended for those suffering from a bad gastrointestinal condition. The reserve substances contained in the grain consist largely of starches and hemicellulose, which are complex carbohydrates: they are largely transformed into dextrins and maltose, simpler and sweeter substances, which give the sprout its characteristic and slightly delicate flavor. sweet.

Even the protein part of the grain undergoes a transformation, in fact the proteins are "predigested" by enzymes breaking down into amino acids, which are easier and faster digestion and assimilation, and furthermore the sprouts undergo an increase in essential amino acids, as well as the nucleic acids , mineral salts and trace elements, which are also found in organic form and therefore more easily assimilated and usable by the body, in particular iron, which in inorganic form is difficult to assimilate and can give rise to gastrointestinal disorders. Vitamins even undergo considerable increases, from 50% to 100%, and in some cases even much more, such as vitamin A, which can increase by 72% after 370 hours of germination. In particular, the sprouts are rich in vitamin B12, which can be useful, together with the richness in iron, to avoid deficiencies when following a vegetarian diet.


To give an idea of ​​the "wisdom" of Nature, let's just give a small example: an average cup of chickpeas provides, roughly, the same amount of protein as a steak, as well as a good amount of minerals and vitamins; however they are deficient in vitamins B12 and C but ... after germination we find that these two vitamins have increased considerably! This phenomenon should not surprise us, in fact it is quite logical that in the process of "revitalization" of the grain, such as germination, typical characteristics of fresh vegetables emerge, such as the presence of vitamin C.

From what has been said, it is clear the importance of allocating a portion of one's diet to the consumption of various types of sprouts. So let's see what seeds we can sprout and how to prepare them to get sprouts. Almost all seeds can be sprouted, you are spoiled for choice, but the most suitable and tested are wheat (or wheat), green soy, millet, chickpeas, beans, lentils, brown rice, oats, sunflowers, and any other edible seeds your imagination suggests. Solanaceae seeds (e.g. potato, tomato) should be avoided because they contain toxic substances. It is preferable to use seeds from organic cultivation, ie those obtained without the use of synthetic chemical fertilizers, herbicides, fungicides and other poisons, for obvious reasons.

The simplest method to obtain the sprouts, if you do not have a suitable sprouting device, is to arrange the well-cleaned and rinsed seeds in a deep dish with water, so that they remain immersed in them; then cover them with a damp napkin and leave them to soak for six to twelve hours, depending on the size of the seeds. In the morning the seeds must be rinsed again and placed again on the bottom

of the dish, as moist as they are, but without adding more water; they must be covered again with a damp napkin and again with an overturned plate, and left to sprout.

The seeds so predisposed must be rinsed twice a day for the first 2-3 days, then just once is enough, with the exception of chickpeas and soy which must always be rinsed twice, then always covered in the usual way. The procedure is repeated for 3-5 days, depending on the seeds chosen, until the sprouts have reached a length of 3-4 centimeters, after which they can be discovered to expose them to light for some time, to ensure that they are enriched with the precious chlorophyll. (about 7-8 hours in indirect light, less if in the sun, to prevent them from drying out).

The germination times may vary as the temperature changes, as well as depend on the type of seed chosen. Use a not too high quantity of seeds, because you have an excellent yield and also to always have a fresh and vital product.

The same operation can also be carried out with a glass jar covered with gauze, which is initially placed in the dark, or with a colander on the bottom of which a napkin has been placed and covered with another. gently in a colander, removing any loose skins and non-sprouted seeds; they can be left to drain for a few minutes and can be placed in a glass container with a lid (not in a plastic bag!) and, if not all of them are consumed, they can be put in the fridge where they can be left for up to 6-7 days, but rinsing them every two days.

How to use them

Once ready, the sprouts can be eaten as they are, raw or after a short cooking (which, however, tends to alter their vitamin richness). They are eaten alone, in salads dressed with a little oil and salt, or combined with vegetables. or fruit, also in the preparation of smoothies and purees, or chopped and combined with homemade mayonnaise, puree or sauces of various types, or combined with yogurt, added to vegetable soups or stews, a few minutes before serving them at the table , added to the filling of tortellini, to the mixture of meatballs, as a condiment for pasta and rice, etc.

As you can see, the possible uses are many, and are limited only by the imagination.

READ MORE
The properties and benefits of lentil sprouts

add a comment of Sprouts to feed on energy and vitality