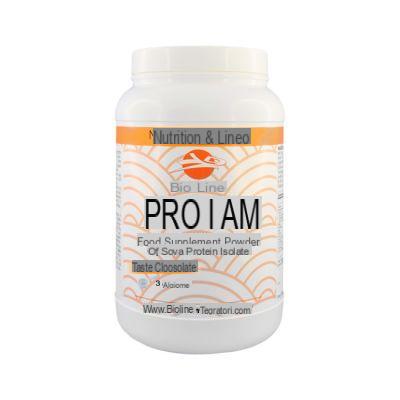 The soy proteins are obtained from the seeds of the legume of the same name, which boast an excellent protein content, equal to about 37% of the dry weight.

These are very high percentages, much higher than those of meat and fish, which contain about 20-25 grams of protein for each pound of product.

In addition to the quantitative aspect, it is however known that soy proteins are of lower "quality" than animal proteins; in fact, among the amino acids that compose them, methionine is scarce, and this negatively affects the use of the other amino acids in protein synthesis.

Equally well known is the concept of mutual integration, which is based on the complementarity of plant proteins; in practice, the amino acid deficiencies of two complementary protein sources are mutually filled. In particular, as regards soy proteins, the complementary source is represented by cereal proteins; It is no coincidence that Asian populations have empirically intuited for centuries the importance of associating soy with cereals, see for example miso soups or shoyu (wheat and soy sauce).

At this point it should be noted that the quality of isolated soy proteins is superior to that of proteins obtained from the ingestion of whole seed or soy-based foods.

Thanks to the high content of glutamine, arginine and branched-chain amino acids, as well as the extraction and processing methods, the isolated soy proteins achieved the highest protein quality score in the new index developed by the World Health Organization (WHO).

We are talking about the PDCAAS, which to establish the quality of a protein source takes into account both the amino acid content and its digestibility. The maximum PDCAAS score is 1,0, so all proteins with a score of 1,0 are considered complete for humans. As anticipated, soy protein isolate, together with casein, whey proteins and egg proteins, totaled a perfect 1,0; beef, on the other hand, scored only 0,92, followed by soybeans with a score of 0,91.

Below we report the amino acid composition of various protein supplements, in order to obtain an immediate comparison between soy proteins and those of whey and egg; it should be noted that the sum of the individual amino acids does not coincide perfectly with the total protein content (due to technical defects that can be found in practically all the manufacturers' data sheets).

From this moment on we will analyze the strengths and weaknesses of soy protein intended not so much as an isolated supplement, but as a protein fraction of the seeds or foods derived from them (among which we also include the so-called textured soy proteins, obtained from the flour that remains from the extraction of oil, and used as "alternative meat").

All these foods contain, in addition to the protein fraction, many other substances that give the soy all those properties that we are going to analyze; many of these characteristics, when specified, are attributable to isoflavones, the indicative content of which in the various products is reported in this article.

Effects on Cholesterol and Cardiovascular Diseases

An advantage of soy proteins over animal proteins is the low content of cholesterol and saturated fats, a characteristic that gives the legume preventive properties in cardiovascular diseases. This property led the FDA, the US sovereign body that regulates the safety of drugs and food, to allow the following message to be published on the label in 1998: "25 grams of soy protein per day, in the context of a diet low in saturated fat and cholesterol, can help lower the risk of heart disease ".

However, this property of soy and its proteins remains somewhat controversial, given the presence of studies that have not shown any benefit in this regard; It should also be noted that - given the indication to consume proteins together with a diet low in fat and cholesterol - the expected results could be linked to the low-fat diet rather than to soy proteins.

The same uncertainties grip the researchers' judgment on the other presumed positive effects deriving from the regular consumption of soy; the presence of the now famous isoflavones, for example, has been linked to a lower incidence of breast, prostate and endometrial cancer, hot flashes in menopause and osteoporosis; these plant substances, given the ability to bind to estrogen receptors, stimulating them in a rather mild way, would balance the endocrine balance of the woman, preventing excessive estrogen activity during the fertile age and compensating for its deficiency in the post-menopausal period. Even in this case, however, only a part of the studies supports these hypotheses, which are therefore still awaiting confirmation.

On the opposite front, just to give an idea of ​​how delicate the question is, there are scholars who strongly advise against the intake of phytoestrogens, especially during puberty; these substances could in fact stimulate undesirable growth processes in girls and interfere with the normal endocrine development of boys. Some researchers even hypothesize a relationship between the high intake of plant estrogens and the increase in male infertility; others link high soy consumption with an increased risk of hypothyroidism and thyroid goiter. As mentioned, we are always talking about soy food derivatives, and not isolated soy proteins, sold as a high protein supplement (90%); in this sense, in fact, it has been shown that the constant intake of a soy protein isolate can increase the production of thyroxine (T4), thyrotropic hormone (TSH), triiodothyronine (T3) and also insulin.

Many of the health benefits ascribed to the proteins contained in soy-based foods derive from epidemiological studies on the lower incidence of the aforementioned disorders in Asian populations, whose diet is notoriously "rich" in soy derivatives; however, these geographical areas are also characterized by a reduced intake of saturated fats, thanks to a diet rich in fiber, fish and whole grains, vegetables, fruit and legumes, even other than soy. In addition, overeating is less frequent, so much so that a popular saying reminds us that the real secret to longevity is to get up from the table before being completely full.

Side Effects and Contraindications

Soy also contains some antinutrients, including trypsin inhibitors, which block the digestion of proteins, and significant quantities of phytates, which by binding to some minerals, such as calcium, magnesium, manganese, zinc, copper and iron, reduce its absorption. Once again the Asian populations teach, given that the long traditional fermentation of soy, necessary to produce the various sauces and miso pastes, destroys significant quantities of these antinutrients; modern industrial processes, used to produce soy sauces, soy milk, tofu and imitations of meat, however, do not eliminate these harmful elements.

Soy proteins are often responsible for food allergies, so much so that their allergenic potential is second only to peanuts.

The vast majority of soybeans on the market are of genetically modified origin; moreover, behind this legume there are the very best of multinationals (including Monsanto), which have every interest in promoting its use in human nutrition (the consumer is willing to pay a golden weight for what (he believes ) can keep it healthy).

All these shadows clash sharply with the image of soy painted by the producers, who describe it as a panacea and an ideal substitute for animal proteins. The truth is that at the moment it is simply impossible to draw firm conclusions about the relationship between soy consumption and the prevention of any disease or ailment; the selection of the published studies can in fact be easily operated to obtain a distorted image, both in a positive and negative sense.

Fortunately, logic and common sense come to the rescue, suggesting that problems related to the intake of soy proteins within the limits of a balanced diet can be excluded; on the other hand, the widespread tendency to take large quantities of soy supplements or products that contain it could be dangerous, in the illogical belief that this helps in the prevention of certain diseases. Unfortunately, we still don't know for sure whether ingesting soy in large quantities in the form of food or supplements is beneficial or harmful; considering that studies on the subject have been going on for many years and given the important amount of factors that come into play in the genesis of disorders and diseases related to soy consumption (both in a positive and negative sense), it is likely that we will never have a definitive answer.

Note: pregnant women (even when it is only sought) and breastfeeding should avoid the high consumption of soy protein of food origin or specific supplements. The same goes for women with estrogen receptor positive tumors, unless otherwise prescribed by a doctor.

Other Recipes with Soy Protein Concentrate