Soy (Glycine max), herbaceous plant belonging to the Legume family, it is also called "bean of Japan"Or" big bean "(original name). Important for its high nutritional value, soy is used in both the food and industrial sectors. Let's find out better.

> Description of soy and its varieties

> Calories and nutritional values ​​of soy

> How soy is used

Description of the soybean and variety

The varieties of soy are innumerable and are distinguished by the length of the ripening period: 80-90 days in the very early types to over 150 days in the sub-tropical types. It is cultivated like the bean, of which it has the same needs; therefore it requires a warm climate, abundant rains and well-ventilated soil. For that reason the major producers of soybeans, worldwide are the United States with 42% of total production, Brazil with 24%, Argentina with 15% and China with 9% (2004 data, source: FAO).

The European Union is a strong importer of grain, flour and soybean oil (about 30%) but from a production point of view it contributes less than 1% to world production.

The properties of soy lie in the fact that, among all legumes produced in nature, they are certainly those with high nutritional value, containing, in fact, proteins, fats, carbohydrates, mineral salts (potassium, phosphorus, magnesium and calcium above all) and vitamins (A , C and vitamins of group B).


Le protein are an important component of the soybean both from a quantitative point of view, they are on average 40% of the dry weight of the seed with some varieties in which they can reach 49% (a quantity much higher than the quantity supplied on average by other leguminous plants which is about 20-25%), and from a qualitative point of view containing all the eight essential amino acids that our body is unable to synthesize. Despite being low in methionine, it is still rich in lysine and leucine and, compared to cereals, it has high percentages of tryptophan.

I grassi, representing on average 20% of the dry matter (in some varieties it reaches 25%). They are about 90% unsaturated fats.

An important component of soy is soy lecithin which is a mixture of phosphoric acid, choline, fatty acids, glycerol, glycolipids, triglycerides and phospholipids with excellent cholesterol-lowering activity.
Fibers, with their 22%, help to regulate intestinal functions.

Calories and nutritional values ​​of soy

Furthermore, for every 100 g of this raw product we have:

Soy is a food of great energy value (122 kcal per 100 g), therefore useful in cases of fatigue, asthenia, convalescence and growth. It has a re-mineralizing, antiastenic and rebalancing function of the organism.

Being almost free of starches and purine (nitrogen compound present in uric acid), it is particularly suitable for diabetics and arthritics who can consume it in the form of bread or pasta.

Furthermore, recent studies and experiments have shown that the lecithin contained in soy, in addition to reduce cholesterol in the blood (it facilitates the incorporation in HDL of the cholesterol present in excess in the peripheral tissues), it also manages to lower the concentration of lipoproteins responsible for many diseases, if present in excessive quantities. Without forgetting the richness in isoflavones which are recognized as having a cholesterol-lowering action and in phytoestrogens (plant-based estrogens) which counteract the most annoying symptoms of pre-menopause and decrease the probability of breast cancer.

Among the products derived from soy, discover the tempeh 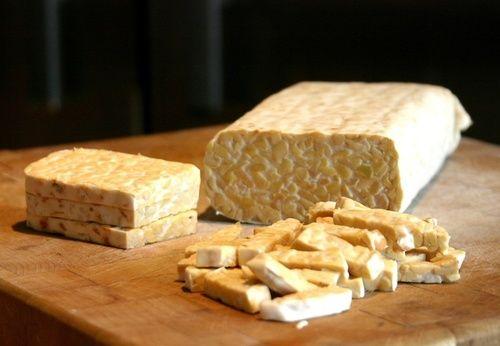 How soy is used

The uses of soy are varied and numerous, both in the food and non-food fields. With the grain are produced for example:

How is it possible to consume soy in our diet?
Soy is commercially available in different forms:

Origin and history of soy

Soy is a legume very ancient which in the past was grown only in the Far East, where it has always been one of the pillars of nutrition (soy has the same importance as wheat for us). In fact, in those regions, soybean bread is eaten, "fu chiang" (soy milk) is drunk, ricotta and "tou-fou" (soy cheese) are made and traditionally used as a condiment. soybean oil.

This plant probably it was already cultivated 5000 years ago in Manchuria, a region in northeastern China. According to a legend, Emperor Shennong in 2800 BC called this legume "Ta Teou", which means "big bean". He ranked soy among the five sacred plants, along with rice, wheat, barley and millet.

It was cultivated, until the end of the nineteenth century, exclusively in China until it began to spread to other continents. In the twentieth century it arrived in Europe, for the production of dietetic foods without starch and here it had a notable diffusion. While in the United States, during the last world war, there was a significant increase in the cultivated area, following a government program aimed at obtaining a greater production of vegetable oils whose interchange had become particularly difficult. Reason why the US is the largest soybean producer to date.

Soy milk is a good substitute for milk

Thanks to its chemical structure, lecithin it is able to hold together two substances, such as fats and water, which are normally not mixable. This emulsifying property means that lecithin is used in a very wide range of food products.

The one used industrially is isolated (essentially) from soy or egg yolk and is mainly used as food additive (E322) with its dual function: antioxidant and emulsifier.

We therefore find it in the production of margarine (as an anti-spatter and emulsifier), but also in chocolate, candies, dessert mixes, sugared almonds, etc.

In recent years (since 1995) the cultivation of transgenic soybeans, modified to be increasingly resistant to herbicides.

Since soy is absolute the most cultivated transgenic product in the world, it is therefore always advisable to use that coming from organic production or in any case explicitly non-transgenic.

Do you want to make a cholesterol-proof dessert? Try this egg-free soy butter tart.
Ingredients for the shortcrust pastry: 300 grams of Kamut flour, 150 grams of soy butter, 100 grams of brown sugar, a pinch of salt, a pinch of baking soda. Mix as with normal pastry. If the dough is hard or too loose, use soy milk (just enough). Get a ball of dough and let it rest for half an hour in the fridge. Spread on a sheet of baking paper and garnish with jam to taste, possibly without added sugar.
Bake in the oven at 180 degrees for about 30 minutes.

Soya among the toxic seeds for the production of sprouts: discover the others

Other articles on soy:

> Soy, the most popular vegetable for vegetarians

> Soya among the foods to keep the skin young

> Are you looking for a recipe with soy? Also try the vegetarian lasagna!

> How to grow soy

> The various types of soy sauce

> Shoyu and tamari, the differences