Snatch Fitness Weightlifting | What's this? How is it practiced? All Revealed!

By healthiergang writer , student in Medicine and Surgery.

Snatch fitness is in full merit one of the exercises that brings the greatest development of power; is one of the two Olympic weightlifting disciplines along with the momentum and one of the many specialties belonging to the subcategory of Powerlifting exercises.

The literary meaning of snatch fitness is "Snatch" and from the name we can understand that the gesture is literally to tear the bar off the floor and throw it into the air with power. It is a very complicated exercise, countless details outline a movement that explodes in fractions of a second and every detail must be managed and taken care of with precision; the actual execution consists of a series of movements such as Deadlift, Jump shrug (shrug of shoulders plus jump), Rotation of the shoulders above the head and Overhead Squat: it is certainly not an exercise that can be approached by beginners because the basic movements to be able to control are different. 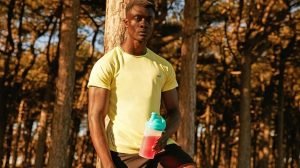 After having found the right balance on the barbell (most nerve-wracking and longest part of the exercise), from the squatting position we perform a deadlift very quickly, taking care to keep the balance as close as possible to the body without ever touching it; trying to increase the speed of execution we extend ankles, legs, even ending on the tip of the toes (Triple Extension) and we pull the barbell upwards (as if you wanted to jump backwards) keeping the arms always extended. After having "launched" the barbell upwards, using the body as a catapult, the energy produced above all by the contraction of the buttocks is exploited (it becomes essential to keep the shoulder blades adducted) and with the arms extended we will have to slip under the barbell!


The initial motion that we imprint on the rod has the purpose of giving us the time and space necessary to "fit" the weight above the head by going under it, widening the width of the feet and knees and ending up in complete squat. Now let's straighten our legs by performing an Overhead Squat and bring ourselves back to an upright position with shoulders, hips and ankles on the same line. The execution of this exercise is long to describe but ends in seconds and takes years of practice.

Now in detail we try to understand how our approach to the tool must be (starting with the barbell) in being able to perform a Snatch safely. These are basic guidelines that each athlete will then adapt to their biotype, their elasticity, etc. The body areas to take into consideration are: hands (for gripping), elbows, shoulders, spine, pelvis, knees and feet: practically nothing is excluded!

1. The one-hook grip is the most effective even if it may initially seem uncomfortable to hold; the thumb is placed in contact with the bar and under the other fingers.

2. The step of the hands is very variable and depends on the characteristics of the athlete; A good rule of thumb is to calibrate the width of the grip, standing up and with the shoulder blades adducted, until the barbell is just above the pubis. Elbows look out and arms relaxed.

3. Feet as wide as the hips and with the toes slightly turned out, making it easier to open the knees.


4. The head should be kept extended forward and up, but not hyperextended. The gaze is directed to a point just above the horizon.

5. The shoulder blades are closed and depressed allowing a better transmission of force. The shoulders must be placed beyond the bar, appearing almost unbalanced forward, that is, the bar must be covered with the body.

6. Abdomen contracted (and it need not even be said!) While maintaining the lumbar curve

7. Last point the knees: they must be opened outwards without the gesture being exasperated.

These are the precautions that must be kept in mind in the starting position, which will gradually become more and more automatic.

Some variations of Snatch fitness involve the use of different tools such as dumbbells, kettlebells or in the actual execution, that is the Power Snatch. With the dumbbell and kettlebells, the exercise is performed with one arm: in the starting position the tool is positioned between the legs; we always try to keep it as close as possible to the body, always going to take advantage of the action of the buttocks during the climb.

The precautions on shoulders (always adduced), spine (with curves maintained), knees and feet are the same as those with a barbell. Here, too, you go into complete squat and go up with an Overhead Squat. The arm not engaged in the grip can be placed at the side of the torso looking for the best balance or for those who have the necessary mobility, it can be placed behind the back.


In the Power versions, the thing that changes is the squat, which is almost not carried out, at most about a quarter of a Squat and the step of the feet is only slightly enlarged in the final part, taking a step of a few centimeters. The loads that are lifted are less than the classic version; In this case, the triple extension follows directly the lifting of the tool above the head and ends in the same position as the classic.

Ps mandatory: the exercise must be carried out in apnea. It takes air during preparation and releases when finished. Continuous training and the eye of an expert are the fundamental keys to developing a superfine technique, so give in and have a good workout!

Audio Video Snatch Fitness Weightlifting | What's this? How is it practiced? All Revealed!
Somatotype | Do you know your build? ❯

add a comment of Snatch Fitness Weightlifting | What's this? How is it practiced? All Revealed!