Slow With Dumbbells | How is it done? Muscles And Common Mistakes

The shoulder muscle is made up of three muscle heads such as:

Obviously we must not forget that these three muscles collaborate synergistically during the various movements. For example, during the adduction movement above 90 °, there is a greater activation of the muscles of the trapezius.

It is important to bear in mind that the posterior area of ​​the shoulder is more indented than the anterior area and therefore, for this reason, it must be worked to compensate for this. It must also be remembered that the scapulohumeral joint is predisposed to dislocation and, therefore, the surrounding muscles perform the function of active ligaments.

This is why it is important to work the various muscles in a balanced way to avoid joint problems. Overly toned back and chest can lead to dislocations. 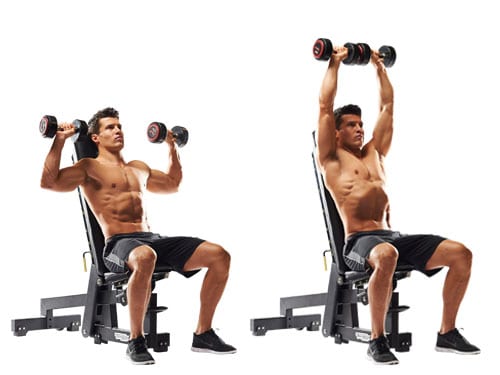 Slow with dumbbells: how is it done?

Let's now move on to deepen the exercise.

For correct execution, sit on a slightly inclined bench, grasp the dumbbells in a neutral position in front of the head with the thumb facing the face. Having assumed the correct position, push the dumbbells upwards keeping the elbows perpendicular (it is important to remember not to hyperextend the arm).

Reached the point of maximum extension, return to the starting position, at the height of the collarbone.

This is a great exercise for the anterior deltoid area, especially if you keep your elbows in a lateral-diagonal direction. If, on the other hand, the elbows are completely closed, therefore pointing totally forward, there is greater participation of the pectoral. It must be remembered that the anterior portion of the deltoid is trained more than the posterior area, especially due to the synergy it has with the other muscles, for example with the chest. 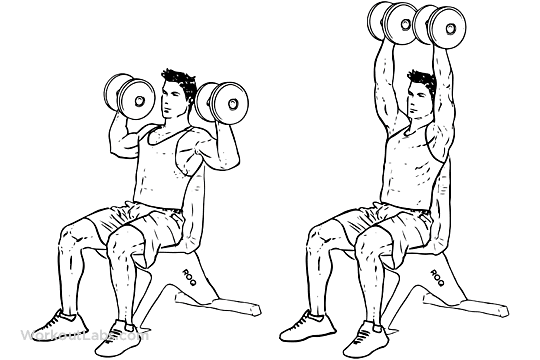 Therefore, in order to maintain a balance from a muscular and aesthetic point of view, you need to proportion your workouts well.

The most common mistakes made when performing this exercise are:

Variations of the slow with dumbbells

Some variations to the basic exercise are:

Audio Video Slow With Dumbbells | How is it done? Muscles And Common Mistakes
Does exercise improve sexual performance? ❯

add a comment of Slow With Dumbbells | How is it done? Muscles And Common Mistakes