Il slow forwardthe military press or even overhead press, is perhaps one of the exercises that can be most beneficial. Exist numerous variations of this exercise on the basis of positioning of the barbell with respect to the body and the contribution of the legs. The military press involves an exclusive movement of the upper limbs, without the push of the legs.

The slow forward is not an adequate exercise for everyone. In fact, each of us has a different anatomy and therefore we can be more or less subjects to problems with the shoulder joint. It is important to point out that in almost all the exercises present it is not the exercise itself that is the problem, but our technique of execution which is not correct. This principle also fits the slow forward. Just think that masters of weight lifting (Olympic lifts) consider it a movement necessary for the good health of the shoulder girdle and then of the shoulder. 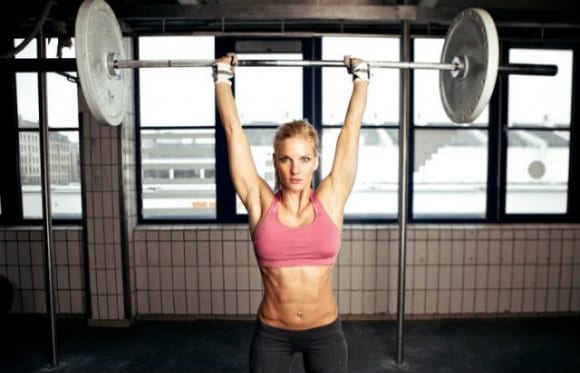 It is therefore good to analyze the movement in order to better understand which muscles are involved and, above all, to know how to perform the movement correctly so as not to risk serious injuries.

The barbell must be challenged with a grip just outside the shoulders. The tighter it would hinder the execution and put a lot of stress on the shoulder joint, the wider it would put stress on the wrists in the first place and also on the elbow. It is still possible widen the grip if you want to put more emphasis on the central deltoid but this would lead to a reduction in load (as well as stress the joint).

In general this turns out to be the strongest amplitude and safe for the slow forward but, as mentioned earlier, you can slightly widen it to find the width which makes movement more comfortable and natural. The barbell should be kept at a height approximately that of the collarbones; this is the rest position. THE elbows during the rest position they must be kept slightly forward with respect to the perpendicular of the bar. The first part of the movement requires the head to be kept retracted so as not to obstruct the movement of the balance wheel.

The push begins by making the bar go straight in front of the face. As soon as you pass the level of the head the arms go extra rotated so as to bring the elbows directly under the bar. Continue the movement until the arm is fully extended and, if necessary, fully elevate the shoulder while maintaining it extra rotated.

In the final part if you decide to raise your shoulders you go to stabilize with trapezes, taking away a lot tension from the shoulders and working the trapezoids. It is important to consider that the closure just described can lead to shoulder inflammation if you do not have adequate mobility. The eccentric phase (of descent) must be carried out as if the backward movement is proposed again until the barbell is brought into the resting phase. 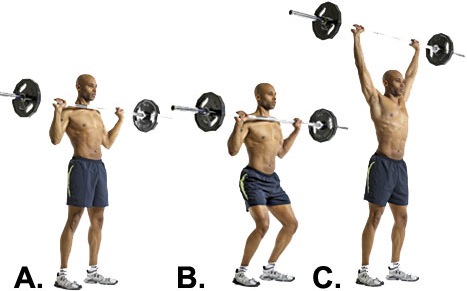 During the execution it is good to take some precautions: bend very slightly the knees in order to partially activate the quadriceps and therefore have greater stability. Contract the buttocks in order to stabilize the lumbar region, involve the abdominals and a particular not generate energy dispersion during the thrust. Finally try to keep the shoulder blades depressed and retracted. Finally it is advisable to have one false grip (thumb behind the bar along with the other fingers). A regular grip would favor an intra rotation of the arm and therefore hinder the recruitment of the muscles in the second phase of the movement.

From what has just been described it can be seen that the balance wheel does not follow a vertical trajectory but a sort of "S". This should be a characteristic of all pushing movements: if the trajectory were a straight one, the final position would not have the barbell in a straight line with the rest of the body and therefore the weight would not be completely discharged to the ground but an effort should be made. to keep the bar in that position. This would make the final phase of the movement very difficult, not allowing a safe execution or even using heavy loads.

Now that the movement is clear it is easy to understand the muscles that are involved. In the first part of the movement, the contribution of the anterior deltoid is high and, in part, also of the upper chest. At the stage of extra rotation intervene i rotators of the cuff and posterior deltoid.

Moving the bar relative to the shoulder shifts the emphasis to the central deltoid. In the final stage the trapezium intervenes higher to elevate the shoulder. Obviously, since there is also an extension of the elbow, the contribution of the triceps is strong.

I stabilizer muscles they are numerous: the dentate stabilizes the scapula as well as the low and medium trapezius. Since the center of gravity is displaced, the entire core has to work intensely, especially if high loads are used. Finally, the buttocks and legs also intervene in part to create a stable base for the body.

Audio Video Slow Forward With Barbell | Running and Muscles Involved
Slow With Dumbbells | How is it done? Muscles And Common Mistakes ❯