Slow behind with seated barbell 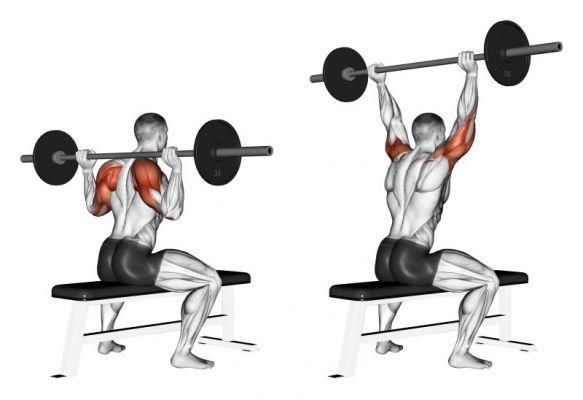 Slow behind with a seated barbell is a basic exercise

Slow behind with sitting barbell: Execution

The starting position sees the athlete sitting on a bench inclined at about 90 °, with the back in his position of strength, the head tilted forward, the legs apart and the feet firmly resting on the ground behind the knees to facilitate maintenance. of the three natural curves of the back and to support the weight more effectively. The elbows are flexed, the wrists straight and the shoulders adducted and extra rotated so that the elbow, wrist and barbell are exactly in the vertical plane from a side view. The barbell rests on the lower part of the upper beams of the trapezius as well as on the hands that grip it at a variable distance, but always greater than that between the shoulders. The execution consists in pushing the barbell upwards on the vertical plane on which it was lying before starting, thus trying to draw a segment of a straight line and not a curve. During the push, the shoulders abduct in the longitudinal plane, while the elbows extend and the shoulder blades begin to rotate upwards when the elbows are at or slightly higher than the shoulders. The execution ends with the complete extension of the elbows. During the whole execution of the exercise it is advisable to place part of the weight on the feet. This is the basic over-the-neck press exercise, and correct execution requires excellent shoulder mobility.

Muscles involved in Slow Back Exercise with a seated barbell

add a comment of Slow behind with seated barbell