Sit Up Abs | Are they good for your back? Running and Muscles Involved

Before talking about the abdominal sit ups, let's mention the importance of abdominal muscles in general.

Nowadays this muscle group is only trained for aesthetic purposes thus neglecting the benefits that the latter brings to our posture and not.

Il rectus abdominis it has a fundamental role in movements, even carried out in the simple activities of our daily life, and it also contributes to carrying out a function "Protective" for the organs and viscera it covers. together with other muscles, it forms the core stability area. we must not forget the importance of the deeper beams (including for example the oblique abdominals) which are important global stabilizers. So it is critically important to have good abdominal sessions

The sit up is an exercise free body carried out to strengthen the rectus abdominis area. The execution begins in the supine position with the back on the floor or on a flat bench, with the hands behind the head or on the chest (so you avoid pulling the neck) and le knees bent. 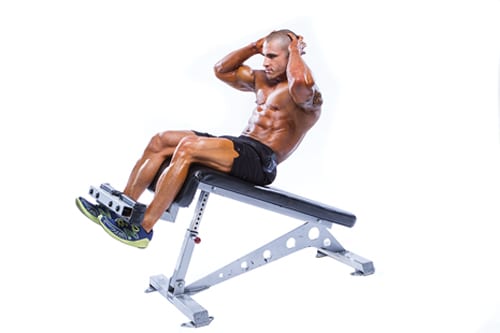 To perform the exercise with more stability and ease, will be carried out on a bench where the feet are blocked by the appropriate stops. In the execution the spinal column turns out fully extended and flexed hips. During the entire duration of the execution the angle of the knees must not undergo variations. Another rule to follow is that the distance between chin and sternum must never vary. In the concentric phase, the entire back will be elevated from the support plane and erect until it reaches a vertical position or almost while


Exercise scholars advise avoiding exercise for his or her own poor stimulation of the rectus abdominis and for the great recruitment of the psoas, consequently causes excessive overload on the lower back thus creating greater compression on the vertebral discs. the result will be widespread pain and increased exposure to injuries in the area.

Despite still being seen as one of the "Classics" exercises for the abdominals, has long been considered, at a scientific level, controversial. This gesture can cause a bowing of the lumbar lordosis (hyperlordosis) e lower back pain, particularly in subjects with relatively weak abdominal muscles. this is due to an imbalance that this exercise can cause. Among the hip flexors, the psoas muscle plays an important role. due to its conformation, theshortening andhypertone of this muscle (which occurs during the performance of this exercise) leads to accentuating the lumbar curve thus creating a postural imbalance and possible lower back pain.

Il dynamic work performed by the abdominal muscles occurs only in the first part of the movement, i.e. when the buttocks and the lumbar area remain on the ground and the rotation takes place around the lumbar vertebrae. in this first phase the exercise assumes the characteristics of the classic crunch.

Some studies and research have established that the abdominals flex the spine first 30 45 ° ° of the movement, or the lifting the shoulder blades off the ground. if this rotation continues over 30 ° thus bringing the back into a vertical or almost vertical position, as is expected in the sit-up, the hip flexor muscles are involved while the abdominal muscles perform a static-isometric contraction.


1. in first degrees of the movement the following muscles are involved:

2. While in the hip flexion:

To conclude the sit up, as well as the other exercises involving the hip joint in flexion, does not solicit adequately the rectus abdominis musculature; these exercises are not effective for abdominal toning; for a long time they tend to accentuate thearching of the lumbar curve consequently creating hyperlordosis; for subjects already exposed to postural problems these should be absolutely avoided; this exercise and others like it can be replaced with the classic crunch to accentuate the work of the abdominal muscles.

Finally, to dispel a "myth" the exercises for the abdominals do not serve a reduce the layer of adipose tissue located in that area! Power is the key!

Audio Video Sit Up Abs | Are they good for your back? Running and Muscles Involved
Skater lunges | How are they performed? Muscles involved and common mistakes ❯

add a comment of Sit Up Abs | Are they good for your back? Running and Muscles Involved