Signature: what Graphology tells us 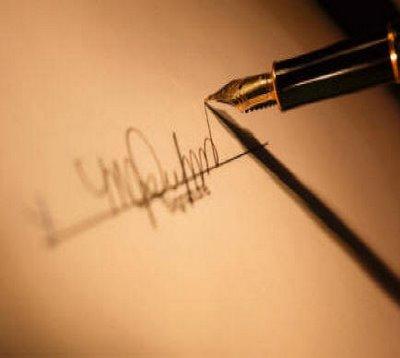 Our writing is like a fingerprint, unique
and unrepeatable. However, among all that we can write what most has
attracted, over the years, the attention of psychologists (and not only) is the graphology of the signature. There are billions of people in the world and each of them signs differently. Although some may seem like it
quite similar, however they do not come to be identical, given that the signature
can be considered our particular sign of identity in the world of
writing. The signature represents the self-image, the identifying mark and
of affirmation of one's "I" with respect to the environment. For this reason it is not
strange that graphology has spent so much time trying to unravel the
secrets of the signature.

Anyway, before referring to some aspects
general related to the analysis of signatures, I would like to point out that the
graphology is not an exact science, in fact, some even put it in
discussion of whether or not it is a science and end up considering it only a
method, a technique. This means all data collected in one analysis
graphological must necessarily be contrasted with further
information.

How do you read the signature? Some details to keep in mind

Although we cannot draw general conclusions a
starting from the exclusive analysis of a signature, graphologists often establish
some guidelines that can serve as a basis for understanding signatures: - Very complicated signatures: A popular saying states: "can that bark does not bite" and this reflection applies
also to the signature which, when it shows too complicated features, it can indicate
a poor character, insignificant feelings and inferiority, a high level
vanity and even the tendency to deceive others. However, it must
consider an exception and that is that, sometimes who is called to sign
particularly important documents chooses to put a complicated signature
to make it less easy to forge. - Very simple signatures: The other extreme is represented by people whose signature is distinguished by too much
simplicity but which remains clearly legible, which may indicate that there is no
need to draw attention. It can be one person a lot
balanced who prefers transparency in interpersonal relationships, but
it could also be the signature of someone who has a low level of
instruction and who perhaps does not handle the pen with ease (in the latter
case we should analyze the safety and speed of the strokes) .– Signatures with many curves: Indicate
almost always tender, good people and with a vivid imagination. - Signatures with many right angles: Indicate
a person with a tough character, pragmatic, practical and with good skills
of compromise and willingness to make an effort. - Signatures in which a particular trait is made before the letters: Indicates highly
organized and with a good ability to anticipate the future. - Signatures highlighted by a zig zag: They indicate a person with an easily excitable temperament who usually
compromise in the most diverse activities with a lot of passion. - Signatures in which the name stands out: When the name is clearly highlighted in relation to the rest of the signature,
may think that it is a person who has been, is, and continues to be,
important in interpersonal and especially family relationships. - Signatures in which the surname stands out: In this case the person tends to want
identify not so much with who he really is but rather with his rank or
social role. These can be individuals who desire a certain
professional recognition and this is the self-image they want
convey to the world. - Signatures crossed out with lines or scribbles: Of course, cross out your signature with a series
of scribbles indicates a person who has low self-esteem. The causes can
depend on a physical disability or simply reside in behaviors
which produce a sense of guilt, such as alcoholism or prostitution.

In-depth analysis of the signature reading

In a general sense, our focus must be
basically directed them where there is more pressure or
processing of the signature, since in this way the person (so
unconscious) is pointing out an aspect that he considers important. There are other aspects to analyze such as clarity
and readability. This usually expresses the trust that the person has in
own image and in the conception of oneself. This conception will be all the more
balanced and realistic the more similar the signature will be to the text and the less
disproportions are capitalized with respect to lowercase. On the contrary, illegibility
of the signature (except in the case of those who have to sign every day for work
several documents) hides the unwillingness to be identified. The
subject shows an evasive, deceptive and false ego. The position of the signature on the paper is also important
and is related to taking a stand in front of the world. This
position or attitude can be approaching when the signature is found
to the right and next to the text. It can express distrust, confidentiality or
introversion, when the signature distances itself from the text and positions itself a
left.The direction the signature takes is another factor from
to consider. This can be horizontal indicating serenity, stability,
balance between ambition and achievement. It can be ascending, thus reflecting
unsatisfied ambition, probably because the person was not able
to place his self-image in the rank he desires. And finally, it can be
descendant, in which case, it may be a frustrating situation or
depression or an illness that undermines strength, hope and illusions. Of course, there are many other factors to
consider when reading the signature but these are broad lines of the elements
essential. But even so, I go back to emphasizing that to judge exclusively
a signature is like disconnecting the personality from the surroundings or evaluating
a person solely from his physical appearance.
Moral flexibility: defensive attitudes make us more severe ❯

add a comment of Signature: what Graphology tells us