The shoulder is one of the most complex joints in our body. Any action you perform, such as pushing or pulling, involves the shoulder muscles in some way. Long story short, when you do core and multi-joint exercises, like the bench press or deadlifts, you're going to use all the muscles in this joint.

Can you think of many exercises that don't require shoulder involvement? Even lifting a single dumbbell is an action that requires shoulder work.

In this article, I will guide you to discover the various muscle groups that make up the shoulders, the exercises to stimulate them, the training method and, at the same time, I will give you tips on how to prevent injuries to these muscle groups.

1. The Muscles of the Shoulders

Typically, the shoulders are divided into two main muscle groups:

The delts are the muscles that surround the shoulder joint. This muscle group is located in the upper arm. Imagine wearing a tank top: the upper arms, which are highlighted by the lack of sleeves (if you have trained them well), is the deltoid.

The deltoid is made up of three bundles of muscle fibers:

1) Anterior deltoid: most commonly, the front part of the deltoid.

2) Lateral deltoid: most commonly, medial part of the deltoid.

3) Posterior deltoid: most commonly, part of the back of the deltoid.

If you want to have nice rounded shoulders, all these three shoulder areas need to be trained very well to get good definition and breadth; and as you well know, I don't think there is need to say it, but it is the width of the shoulders that makes them so aesthetically beautiful.

Unfortunately, I've seen people who neglected posterior deltoid training. They didn't know that this part is one of the most important areas of the deltoid and that it needs the same amount of training as the other two.

The trapezius is a muscle located between the neck and shoulders, where by shoulders we mean the area immediately above the back muscles. 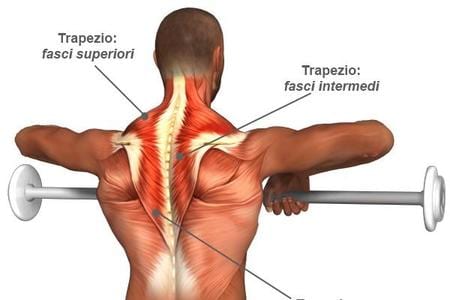 Having a developed trapezius also gives a little something extra to the general development of the shoulders. In bodybuilding, the trapezius is considered to be one of the most important pose muscles.

A nice chunky trapezius gives the right symmetry to your body structure.

Therefore, the training of the trapezius is usually carried out together with that of the deltoids, and constitutes a single body area, called the "shoulder".

How to Train Deltoids and Trapezius

Deltoids and Trapezius are usually trained in the same session, but some people prefer to do differently. For example, I train the trapezius first and then the delts one by one, since for the trapezius muscle I perform heavy lifts and even some multi-joint exercises.

The shoulders can be trained twice a week and occasionally can be included in chest or arm exercises.

2. The Exercises with Weights

1) Warm-up - 3 sets in all (1 set of front dumbbell lifts, 1 set of standing side lifts, 1 set of reverse pec deck). Keep low with the load! We just want to pump some blood and activate the circulation.


2) Seated side raises - 4 series (15,12,10,10 rep.). Perform the exercise while sitting on a chair or bench. Doing this movement while sitting should prevent you from helping with the swing and bounce of the weight, and you should think about pushing only from the elbows to cover the full range of motion, and not with the momentum of the legs.

3) Slow forward (with barbell, with dumbbells, to the machine) - 3 sets (15,12,10 rep.). Try using the Smith Machine when you increase the load. Maintain a straight posture and your back aligned. Do the movement in a slow and controlled manner. Do not fully extend your elbows at the highest point of the lift, so as not to lose muscle tension.

5) Front Raises with Dumbbells - 3 series (15,12,19 rep.). Do this exercise slowly. The dumbbells should never exceed the height of your nose. Do seated front lifts if you feel you are giving yourself momentum or swinging excessively.

6) Pull to the Chin - 3 series (15,12,10 rep.). Use a grip that is shoulder width apart. Keep the bar close to your body. At the highest point of the movement, the bar should be near your chin. Look ahead as you perform the exercise. This movement stimulates the trapezius and the anterior and posterior deltoids.

7) Shrug - 3 sets of 20 reps. Go heavy. Do not use your elbows during the movement. Try not to take your heels off the ground to get up more. Use the straps (e.g. those used for deadlifts) to get a firmer grip, which still needs to be shoulder width apart. At the highest point of the movement, hold the contracted position for a second and then slowly come down. You can do this exercise at the start of your workout if you can't lift a lot of weight.

1. Warm up very well. If you go to train the delts without having done a proper warm-up, you will greatly increase the chances of suffering rotator cuff injuries.

2. Go heavy with the load when you train the trapezius and instead keep lower weights when you go to stimulate the delts.

3. Maintain an upright posture when training the trapezius, especially as the neck muscles are also involved.

4. Start training with isolation exercises, then move on to multi-joint movements. The idea of ​​starting with muscle isolation exercises stems from the fact that, during these movements, the muscle warms up better and pumps more blood. An example of a warm-up could be: 1 set of front dumbbell lifts, 1 set of side lifts and 1 set of reverse crosses.

5. Multiarticular exercises are for building mass. Repeat them often.

7. Practice with both dumbbells and barbells, alternating them every week.

8. Eat right and healthy and make sure you include rejuvenating protein shakes and supplements in your diet.

add a comment of Shoulders tab | The Best Exercises With Weights