Short memory is related to the number 7 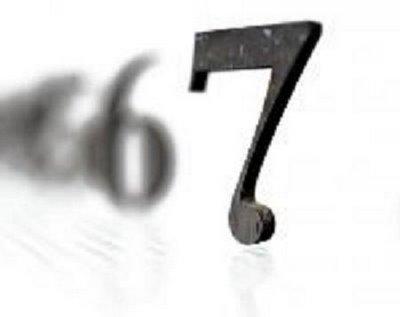 Psychologist George Miller said in 1956 that he felt haunted by the number seven; number that crept into his mind as he read the newspaper or managed data, increased and decreased in front of his eyes but was taking more and more an impromptu and omnipresent form that could not be due to chance. Then Miller hypothesized that seven was the magic number that represented the quantity of elements that we can keep in ours short memory (with a variation of +/- 2 elements). Recent research has confirmed that his hypothesis was correct: people can manage more data in their short memory as long as it is stored in large groups but ... the amount of these large groups is also bounded by the number seven (with the usual variation of +/- 2 groups). Perhaps it is from this collective unconscious that comes the need to categorize things into groups that do not go beyond seven (just remember the Seven Mervaiglie of the Ancient World, the Seven Deadly Sins, the seven musical notes, the seven days of the week). But ... how did this theory arise? One of the best documented characteristics of short memory is precisely its limited nature in containing information. Miller relied on his own experiments and analyzes of previous experiments in which it was highlighted that, regardless of the quantity of initial stimuli and the variety of them, people tend to remember +/- 7 elements. The studies analyzed by him included the memory of musical notes, spatial points, brightness of colors, degree of salinity of the water, phonemes ... all indicated the number seven as the limit of perception and human memory. But the study developed in Mount Holyoke College was the one that offered the decisive result. Researchers Kaufman, Lord, Reese and Vollman showed randomly arranged dots on a screen that flashed for 1/5 of a second. The task of the people who participated in the experiment was to report how many points they saw each time (1 to 200 points could appear in various sessions). The result was very clear: when the session did not exceed seven points people were not mistaken while that when the magic number was exceeded, memory errors began to appear, and the participants themselves recognized that they had switched to making an average estimate rather than to count. These experiments led Miller to propose his theory regarding the "absolute slip of judgment": we have a limited ability to accurately identify and process stimuli, which is why we will also have a limited ability to store information in our memory , unless ... we don't use some special techniques like chunks. THE chunks they are information units in which we integrate, giving them a certain sense, the most sensitive data. In Miller's logic, a simple datum would be the equivalent of a word; whereas a chunk would be made up of several words, like a sentence, something much easier to remember as it would have a specific meaning for the person. So Miller argued that the best way to remember is to transfer information to a verbal code so that we can make large packets of information or chunks; otherwise our visual memory could keep only a few details of what happened. To demonstrate this theory, I propose a simple exercise. Try to remember the following numbers one by one: 974114921945 Difficult? It is likely that you cannot remember them all or that you have to make an effort to do so; however, if we give the numbers a new order and group them into units that make sense, such as the year World War II ended, it would look something like this: 1947, 1942, 1945. easy now? However, we already know that there are always those who contradict every theory. Thus, in 1980 Ericsson, Chase and Faloon decided to test the theory of the perfect number. In this regard, they trained students for the purpose of learning sequences of decimal numbers at random. The experiment lasted more or less for a year and a half, during which the students underwent this exercise 3-5 times a week. At the end of this training the students had increased the power of their working memory from 7 to 79 numbers; in other words, they could repeat 79 numbers sequentially in reverse order without being mistaken. Evidently their short memories had improved considerably, and they often even remembered sequences they had learned in the previous days. However, from my point of view, the two experiments are complementary. Miller has shown us that we have a very limited short-term memory capacity, which we can extend if we organize the data by including it into larger information groups and make sense of it, while that Ericsson shows us that the power of training can expand our limits beyond the 'imagination.

Memory helps us to be happy ❯