Sea salt, properties and use

Il sea ​​salt it is an indispensable spice as a useful neurological conductor against cellulite, skin diseases and bronchitis. Let's find out better.

> Properties and benefits of sea salt 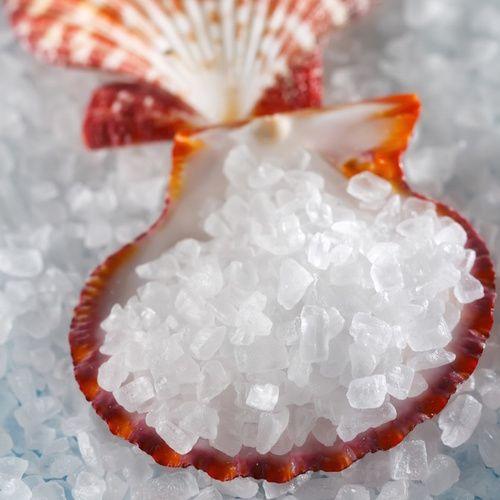 Sea salt is a spice made from sodium chloride (NaCl) dissolved in sea water along with other substances. Sodium chloride is the sodium salt of hydrochloric acid. At room temperature it is a colorless crystalline solid with a characteristic odor and taste. Sea salt is obtained by spontaneous and fractional evaporation of sea water.

Solar evaporation allows the extraction of sea salt, done in establishments called saline. Sea water is collected in large shallow tanks; the water evaporates and the brine remains, which concentrates and is transferred, as it is concentrated, in different tanks, to finally arrive in the crystallizing tanks, where the sodium chloride "precipitates" and is then collected.

There are two types of sea salt: refined or whole, which maintains the properties of other substances, such as iodine, magnesium, potassium and other microelements, intact. Sea salt is used as a flavor enhancer, known and marketed since ancient times, widely used in cooking, for the preservation and cooking of foods (meats, cheeses, vegetables, spices). Sea salt is also used to prevent certain diseases, such as goiter or hypertension.

It is then used in the chemical industry, once for the tanning of leathers and fabrics, now for saponification, for example, or as a natural anti-freeze.

Properties and benefits of sea salt

Sodium chloride is a conductor, not only of electricity, but also of neurological transmission. Salt is in fact a substance fundamental for the development of vital physiological mechanisms, such as the transmission of nerve impulses, the exchange of liquids and the regulation of pressure. Sodium chloride is in fact essential for life on Earth: most of the tissues and fluids of living beings contain a certain amount of salt.

The physiological solution used in medicine, which contains a certain percentage of sodium chloride, is used to treat dehydration; but if you consume more than 5 grams of salt per day you can get sick like stroke, kidney problems and heart problems.

If used externally instead, it can be a valid ally to fight edema, cellulite and for purify the tissues: baths, compresses, salt bandages deflate, reduce water stagnation, detoxify the tissues. It is better if you use whole sea salt: the refining deprives the salt of numerous elements useful to the body.

Sea salt has always been used for to flavor and preserve foods, such as meat and fish, and spices, but also to cook them. Pay attention to how to use sea salt in cooking: legumes must be salted only after cooking, otherwise they harden, as well as boiled or steamed vegetables, so as not to lose their nutrients.

Grilled meat should be salted first, while the one in the pan after cooking. Sprinkling and letting the courgettes and aubergines rest with the salt causes them to lose water and thus the bitter taste of the aubergines.

In the country the salt from Cervia it is considered a special salt, as "sweet salt" because it contains a reduced percentage of bitter substances. The salt pans of Cervia also sell a tile of pure sweet salt from Cervia to cook dishes directly: foods absorb the right amount of salt they need, salting themselves independently. Cooking times are reduced and the cuisine is absolutely dietetic.

The fleur de sel, the flower of salt, is a type of French raw sea salt, characteristic of southern Brittany, very delicate, which does not cover the flavors but enhances them.

In the country the largest salt flats they are located in Margherita di Savoia, in Puglia; in Sardinia, near Cagliari and in Sicily, near Trapani; in Romagna, in Cervia. In ancient times, salt was so important that it was also a bargaining chip, which is why Italy is full of "Salt routes": the Via Salaria, for example, which led to the port of Ostia; the Via del Sale which connected the Ligurian coasts to the Lombard plain; and again the Piedmont and Emilian salt routes. The word wage it derives from salarium, the quantity of salt that was given to soldiers leaving for outposts abroad. The reference book is "The miraculous sea salt" by Giuseppe Maffeis.

7 recipes with various types of salt

Other articles on salt:
> What are the different types of salt
> The varieties of salt and their uses

> The use of salt in the kitchen

> Bath salts: benefits and how to use them

> Types of salt, let's find out

Audio Video Sea salt, properties and use
Probiotics: benefits, contraindications, where they are found ❯

add a comment of Sea salt, properties and use