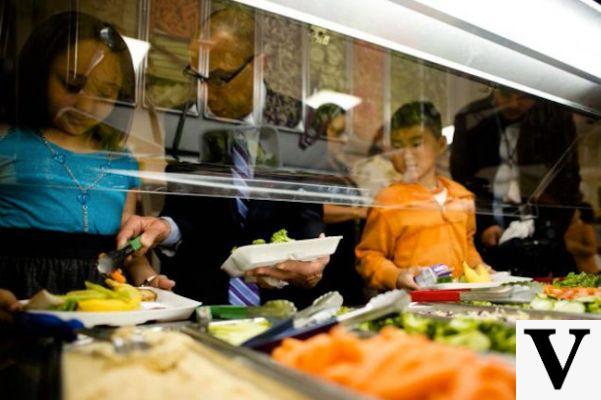 Vegetarian meals in school canteens, here is a theme that is still not very easy to deal with in your country, especially in public schoolto. The bureaucratic procedures to be faced by mothers are not always simple and can take longer or shorter times depending on the municipality they belong to. Getting a balanced diet for your children in school canteens in general can sometimes seem like a huge undertaking.

Yet being able to follow one special diet, for ethical or health reasons, it should now be an established right. A step forward in our country is being completed thanks to the spread of organic canteens. A turning in this regard it perhaps comes unexpectedly from the United States, which usually does not shine for the healthy eating habits of its inhabitants.

A New York here then is the first public school ready to serve only vegetarian dishes. The new generations of the students of the institute PS 244Q they will be able to have at their disposal in the school canteen much healthier dishes than the burgers and ultra-seasoned pizzas that were intended for those who had preceded them.

The institute is one elementary School located in the Flushing area (Queens). recently became the first example of a public school, both in New York and across the nation, serving a completely vegetarian lunch menu. The school menu had evolved over the last few times in order to make available healthier dishes, to then embrace the possibility of offering only vegetarian dishes. The Office of School Food and the New York Coalition for Healthy School Food collaborated to create the menu.

Among the dishes on the menu are dishes based on chickpeas, black beans and tofu, vegetarian chili, cucumber and brown rice salad, falafel and sesame sauce, roasted potatoes. The menu was defined as rich in fiber ed mainly vegetable based. It is free from both meat and fish, as any true vegetarian menu should be. Formerly known as the Active Learning School, the New York Elementary School had already begun offering vegetarian dishes four days a week, but later decided to extend their new menu to all five days of the weekly school attendance given the 'appreciation received by the little students who dine inside the canteen. An example to follow.