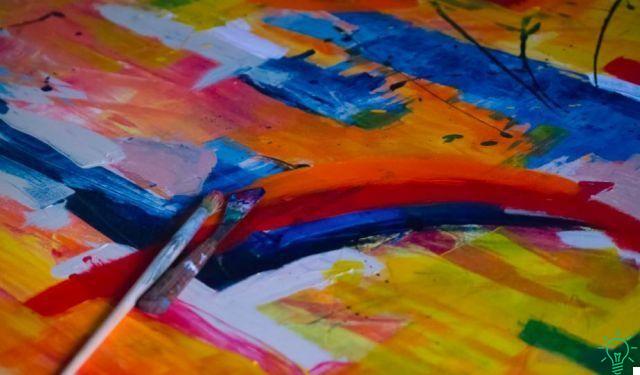 The SCAMPER method is a simple and effective tool for force our brains to think with creativity.

-A moment though! - you may be saying to yourself - Can the words "force" and "creativity" really be in the same sentence? Aren't these two completely antithetical things? -

You see, our brains, when left completely free, tend to getting stuck, not knowing where to start, getting lost in the immensity of possible alternatives.

It is the so-called syndrome of blank page or canvas, which in fact affects those who, improvising from one day to the next, for example a writer or a painter, do not have an effective method for produce, select, analyze and represent their ideas.

So that, in the end, he has none at all, or he has repetitive and low quality ideas.

The great artist on the contrary, far from being passively waiting for inspiration, through his tools of the trade it forces his ideas to emerge and express themselves fully.

Similarly, the SCAMPER can be considered as one of the tools of the trade of the art of creative thinking.

SCAMPER is the acronym of the Anglo-Saxon words:

The verbs that compose it describe a analysis methodology of processes / problems / situations that allows generate ideas and solutions in an orderly and varied way.


As often happens with creative thinking techniques, the SCAMPER has been developed in the business world, in particular for improve the design of products or processes.

This may seem a bit prosaic to some, because at the end of the day it is a fine-tuned method of making more money (which, by the way, is nothing wrong with that).

But it's actually a guarantee.

In fact, if organizations have invested money to develop, test and implement it, it means that the SCAMPER is working.

Other than that, I like it a lot for two reasons:

Now let's see the SCAMPER method one verb at a time.

Is there any part of the process or situation you are analyzing that you can replace with something more effective?

For this first step it is very important that you have a curious and open attitude.

In fact, to replace something, it is necessary to have valid alternatives, and alternatives must be sought, known, evaluated.

In practice, you may find yourself having to replace one habit with another. An old way of doing things with a new one. Something you know little with something you have always done.


Let's face it, it also takes a little courage.

In fact, you have to go against the well-known adage "Whoever leaves the old road for the new ..."

Can you combine ideas, techniques, processes, in such a way as to combine strengths and compensate for any weaknesses?

I'll give you a typical example taken from study techniques: to do the same thing, for example to memorize, there are different strategies, each with its pros and cons, which also depend on what you are studying.

And, in most of the occasions, these different strategies can be combined with each other to obtain better results than not using just one of them.

The problem with combining is that, to do it, you have to:

Many do not like this possibility / need to combine multiple strategies according to different needs: they would rather have strict instructions instead, because they are simpler and create less insecurities.

But the rigid instructions are not suitable for complex and varied activities such as study, work, sport or relationships.

How could you improve an outcome by making even small adjustments to what you do?

To adapt something it takes a lot of data, a lot of experience and a keen eye.


In fact, the differences in results can be subtle, even if important, and may take time to show themselves clearly.

For this reason, in explaining to you what I mean by "suitable", I believe there is no better example than that of medical practice.

The same drug, for example, is used with thousands or millions of different people.

On the one hand, therefore, it is important establish a standard, on the other hand it is necessary adjust doses and times of administration to the specific situation of each patient.

For this reason, therapeutic protocols often indicate not absolute values, but range of use.

And the good doctor starts with a certain dose and then slowly adapts it to the individual case.

So, you too, when you are looking for solutions do not underestimate what you are already doing.

Maybe you are puzzling to find who knows what radical solution, and instead it takes just a little more of one thing or a little less than another to have very different results over time.

How could things improve if you radically change what you are doing?

While adapting is a slow process, moving on a continuum (for example, the ideal dose of a medicine is reached in small successive steps), editing is a radical process.

To understand the difference from what we have seen so far, I refer again to the example of medicine:

To modify means to use completely different ideas and approaches than those used up to that moment: it is a choice important, risky, potentially disruptive.

For this reason it must be weighed with extreme caution.

Many times, editing works in theory, on paper. But when then you go to practice, here something you did not foresee goes wrong.

If it happens, do not despair and do not give up on the first failures: surprises are inherent in a process that, by its nature, changes radically from the past.

Put to another use (use differently)

Can you use a certain technique / ability in a completely different context from the one for which it was born?

More than 30 years ago, a Cleveland company invented a $ 3 electric scooter fixed to a base on which you could fit a Chupa Chups and spin it while you licked it.

It was a sensational flop.

At one point, however, the company's chief engineer noticed that the electric toothbrushes on the market at the time were large and very expensive, while their little $ 3 gadget could have effectively turned a toothbrush's head spinning.

Thus, the motor developed for the Chupa Chups allowed him to build the first low cost electric toothbrush in the world, Spin Brush.

Procter & Gamble he bought it a few years later for 480 million of dollars.

Sometimes it happens that a product, an action, an idea, in a certain context, simply do not work.

It might then be worth it change the context, using it differently, as happened for the Chupa Chups moped.

Other times, however, an idea works very well, and for this reason it might be worth using it in other contexts too, to see if it has the same effectiveness.

This is the case, for example, of the Ivy Lee method, born to manage time in business, but very effective in managing everyone's daily life.

To use an idea outside the context for which it was born, you need to cultivate multiple interests, know how to get out of your comfort zone, love to "contaminate" and get involved in areas other than their own.

What if some of the things you do are completely useless or even counterproductive?

It's full of things you do by tradition, by habit, by inertia, and that for a long time now no one has been wondering if they are really needed or not.

Think about it: For example, when dealing with bureaucracy, you don't ask yourself very often because the hell there are all those modules and those steps to do?

The fact is that perhaps, over the years, rules, requirements and obligations have been stratified one after the other, without anyone taking the trouble to delete what was obsolete.

We must therefore have the courage to stop and ask ourselves: does this thing still make sense that it exists or not?

To do this, you need to develop a minimum of intellectual anarchy: in fact, if you don't question established authority - here represented by obsolete customs and habits - you certainly can't innovate.

Here too, obviously, a sense of proportion is needed.

“Everything should be made as simple as possible, but no more than necessary,” Einstein said

If you changed the order of the operations, how would the result change?

Sometimes the problem is not in the single elements, but in the way they are arranged.

In the world of diets for example, in recent years there has been a real revolution that has shifted the emphasis, from the quantity of calories, to:

This paradigm shift has allowed not only to obtain better results, but also to make it easier for the patient to follow prescriptions.

In fact, you no longer go hungry, but eat enough, albeit with carbohydrates, fats and proteins "rearranged" in different ways than in the past.

Rearranging is not easy: you need to have very clear relationships between the various elements, a certain propensity to experiment, and the ability to measure results in a precise and objective way.

Otherwise you risk not understanding if the different results are really the result of the re-arrangement or are instead the result of chance.

How much could you improve in your study, work, or even in your personal life if you knew and used tools capable of force yourself to think better?

The SCAMPER method is certainly one of them.

When you analyze a problem, look for a solution, build scenarios, make action plans, try for a moment to close your eyes and review each of the letters of the acronym one after the other:

S: Can I Replace Something?

C: Can I combine two or more things together?

A: Can I Adapt an existing element?

M: Can I radically change the process?

P: Can I try a different use of something that is already there?

E: Can I Delete Parts?

R: Can I re-arrange what's already there?

You will see that, almost always, you can answer yes to at least one or more of these questions.

And so, compared to freewheeling thinking, you will produce more numerous, better, often very original solutions.

It is the difference between sitting in front of the blank canvas without knowing where to start and doing it knowing at least some of the tools of the trade.

Metriotes: how to learn the art of moderation ❯

Parkinson's Law: Why We Waste Time and 5 Strategies for Quitting

Evernote for study and productivity.

Marginal Earnings Theory: How to compete at the TOP

Cicero's Loci technique: how it works, how to use it to study

add a comment of Scamper method: how to activate creative thinking