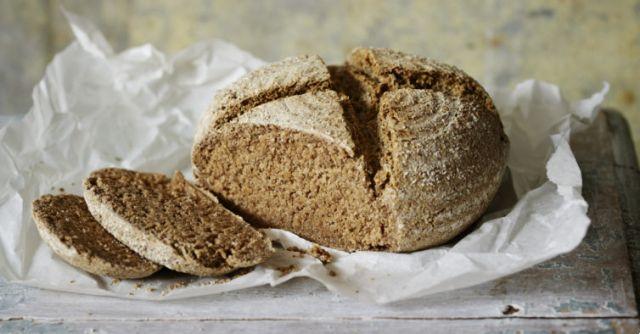 There are two types of Rye bread, the one obtained with only rye flour and the one in which this is mixed with other flours, more or less refined.

Being one low gluten flour, rye flour is sometimes mixed with that of Manitoba which, on the other hand, is particularly rich in it.

The rye bread, therefore, it is not always a wholemeal bread, as is commonly thought. First of all it depends on the other flours with which the rye flour was mixed and then also on the type of rye flour that was used.

Rye flour, in fact, can be more or less refined exactly like other flours.

Rye bread is also called black bread, due to its characteristic brown color. Often, it is enriched with oil seeds, for example sunflower or flax seeds or mixed.

It has a more compact and less alveolar crumb than other types of bread.

The crust is crunchy and the inside is moist, with an acidic flavor.

In the village it is a traditional food of the Alpine valleys; in particular the Valais rye bread is known which has obtained the controlled designation of origin. In other areas of our nation, however, it is not particularly widespread and, therefore, especially in some regions it is not easy to find it on the market.

The rye bread has a low glycemic index and therefore, especially if the percentage of rye flour is quite high, it may be preferable over other types of bread for people with diabetes.

Thanks to the richness of dietary fiber, rye bread has a high satiety index, allows you to control cholesterol levels in the blood and is a valuable aid in the prevention and treatment of constipation.

Regarding cholesterol, research published in the journal Nutrition, Metabolism and Cardiovascular Diseases recommends consuming rye bread enriched with nuts and other oil seeds, which are rich in plant sterols.

It is very rich in minerals and vitamins, especially B vitamins, vitamin E, potassium, magnesium, phosphorus, calcium, iron and manganese.

Just for the rich in nutrients, traditionally it is attributed an energetic and regenerating power.


Although it contains less gluten than other types of bread, rye bread is not without it and therefore is not a recommended food for people with celiac disease.

The rye bread contains fewer calories than other types of bread. A bread made from rye flour alone brings from 170 to 220 calories per 100 grams of product, depending on the degree of refinement of the flour used, compared to about 280 for 0 flour bread.

However, the difference, in purely caloric terms, is not the only advantage for those who want to stay fit. In general, in fact, the characteristics of rye bread, including the richness of fiber andhigh satiety index, make it a particularly suitable food also for those who want or must follow a controlled caloric diet.

Read also Bread in the world >>