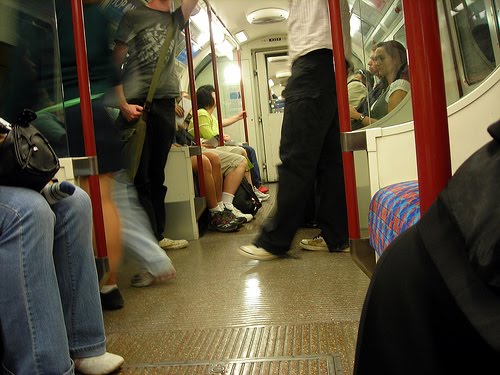 About 30 years ago the students of the well-known professor and psychologo Stanley Milgram, ventured into the New York subway to implement a very special experiment.

The goal was apparently very simple, they had to ask passengers sitting in the subway to give up their seats. This over and over again until the 20 tests are completed. Why? Milgram was interested in exploring the implicit rules of conduct on the subway, where the first-come-in is supposed to own the seat. Many of the rules and norms that help maintain order in our society manifest themselves implicitly, and we often don't even realize they exist until someone breaks them. But… how would a person react when one of these implicit norms is violated? Would he give his place to people who asked for it? The results were unimaginable: 68% of people gave their seats to the young man who asked for it even if some passengers let themselves go to some nasty comments. However, the even more puzzling results were those obtained by Milgram's students. Initially it was stipulated that each volunteer had to complete 20 tests, but the students returned to Milgram after completing only 14 of these and complained that the task was embarrassing and paralyzing. Then Milgram found that the task he had imposed on his students came to be traumatic for some while for others it was just plain difficult to complete. Thirty years later, the people who took part in this experiment still remembered this experience very vividly. Milgram himself completed the number of tests necessary for the study, but his surprise was even greater since when he found himself in front of the person he had to ask for the position he himself felt paralyzed with fear and embarrassment. The next semester Milgram repeated the experiment, but on this occasion with 10 students, who were asked to do 14 tests. However, he introduced a small variation: the students went in pairs, since having a companion as an emotional support facilitated the difficult task of asking a passenger to relinquish his seat. At the same time, the second person acted as an observer, recording what was happening. The question to ask also changed. In the first experiment the question was very simple and direct: "Excuse me, could you give me your place?" while that in the second experiment the question was less direct and was asked primarily to the companion (who for the passengers of the metro was a complete stranger): "Do you think it would be appropriate if I ask someone to give me his seat?" Faced with the false confusion shown by the respondent, the student had to ask the same question to the seated person. The result? Only 42% of people gave up their jobs. However, Milgram was not satisfied and continued with the experimental variations, in this case the student carried a book in his hands and walked to the person asking: “Excuse me, could you give me your seat so that I can read? I cannot read while standing ”. In this case, 38% of the people gave up their jobs. Another variation consisted in showing up with a sheet of paper in which the fateful request was reported. In this case the place was given up by 50% of the respondents. Many of the students attributed the passengers' willingness to their obvious embarrassment. Some claimed to be so pale that people were persuaded to give up their jobs because they considered them sick. However, even if the experiment centered on analyzing how we react to implicit norms, the very idea of ​​violating them causes us strong emotional reactions. But I would like to point out another interesting element: the positive response rate was lower when the young people asked for the place to read, why? From my perspective I believe that the fact of not offering reasons as to why the position was asked could suggest that we were in a situation of real need. After all, who would dare to violate social etiquette if they weren't really driven by a compelling necessity? However, when young people said they wanted the place to read their motives, they left no doubt, and perhaps for this reason, most people assumed that students could postpone their wish to another time.

New truth test: how to deceive him? ❯

add a comment of Rules of Conduct: A Curious Milgram Experiment