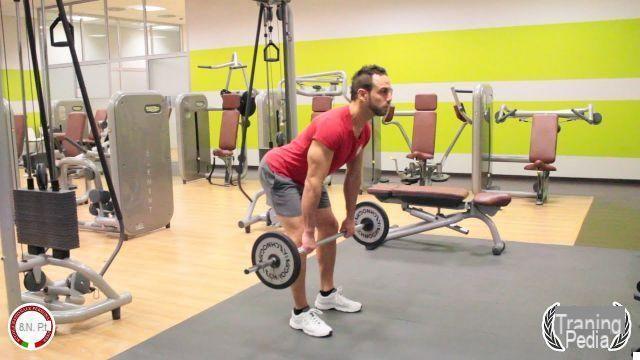 Romanian half deadlift is a Multiarticular / accessory exercise

The starting position sees the athlete standing with the shoulder blades adducted and the knees slightly bent and the barbell held in the hands. The distance between the feet (stride) must be very close to the distance between the shoulders. The opening angle of the feet must be about 10 °, but with room for modification based on individual characteristics; generally between 8 and 20 degrees. The arms come down straight to the sides. The grip can be supine, prone or mixed (one hand supine and the other prone); the latter confers greater solidity. The exercise starts from the negative phase, that is with the only flexion of the hips accompanied by a very controlled flexion of the shoulder in the sagittal plane to maintain the trajectory of the barbell in the vertical plane without detaching it from the legs. The other joints are not affected by angle changes. The descent phase ends at the point beyond which it is no longer possible to keep the back in its position of strength. The execution consists in lifting the barbell vertically thanks to the exclusive force of the extension of the hips, accompanied by an extension of the shoulders in the sagittal plane, up to the return to the starting position.


Muscles involved in the exercise Romanian half deadlifts