RNAm, or "messenger", takes this name because it is responsible for carrying the "message" of genetic information from the place where it is carved (the nuclear DNA) to the place where it will be read (the site of protein synthesis in the cytoplasm).
How does all this happen?
We have already seen that the activity of nuclear DNA is distinguished in an "autosynthetic" moment (that of reduplication, in phase S) and an "allosynthetic" moment (that of transcription, G1 and G2).
In both cases we witness the unfolding of the DNA double helix and the opening of the "zip". However, we can make a distinction between reduplication and transcription, remembering that the reduplication enzyme (the DNA-polymerase) "travels" both chains at the moment of the opening of the hydrogen bonds between complementary bases, while the transcription enzyme (RNA -polymerase) runs through only one.
Recalling that the two DNA chains are "antiparallel", and therefore on the side of the opening one begins with carbon 5 and the other with carbon 3 of the pentose, just imagine that the RNA-polymerase can start reading only with carbon 5 to explain the fact that only one DNA chain acts as a gene, that is, as a template for RNA.

it is evident that if the copy took place on both DNA chains, each messenger produced would correspond to a complementary messenger, with a totally different sequence. Whenever the cell needed to use a certain gene, it would end up with two products, one of which could be not only useless, but also harmful.
During transcription, RNA polymerase "copies" the information contained in a gene onto the DNA into an mRNA molecule. This process is similar in prokaryotes and eukaryotes. One notable difference, however, is that eukaryotic RNA polymerase associates with mRNA-verifying enzymes during transcription, so that modification proceeds quickly after transcription begins. The unmodified or partially modified product is called pre-mRNA, which when modified is called mature RNA. [http://it.wikipedia.org/wiki/RNA_messaggero]
The transcription, that is the printing of the RNAm by the DNA, involves the following phenomena: 1) unwinding of the DNA spiral; 2) opening of the "zip"; 3) presence of RNA-polymerase; 4) availability of ribonucleotides of the four types; 5) availability of energy to "activate" and bind ribonucleotides together.
The RNAm molecule is synthesized gradually, in a sequence determined by complementarity with that of the DNA. For each adenine, guanine, thymine, or cytosine of the DNA will be arranged in the complementary RNA chain respectively uracil, cytosine, adenine and guanine, always according to the double and triple bond principle. After that, the RNAm molecule detaches and, released, migrates towards the cytoplasm, where it will bind to the ribosomes to give rise to protein synthesis.
RNAm molecules are generally believed to be single-chain. This is confirmed by the lack of defined relationships between base pairs, and corresponds to the need for limited stability.
Indeed, if the RNAm molecule were very stable, it would continue to indefinitely produce the corresponding polypeptide, even when it became excessive. On the other hand, RNAm, being monocatenary, can easily break down into component ribonucleotides (reusable), while any prolonged production of the relative polypeptide will be ensured by the continued transcription of new RNAm.
It should be noted that transcription concerns the transfer of information from a 4-letter alphabet to another 4-letter alphabet (with the only difference of U instead of T), and that the relative process still occurs for single nucleotides, while it will be in the translation that the passage to an alphabet of 21 letters and the reading of the nucleotides will take place, not individually, but 3 at a time (in triplets).

RNAr, or ribosomal, is the building block of ribosomes.
RNAr is printed from DNA, and precisely from that section of certain chromosomes called the nucleolar organizer. Corresponding to this is the fact that the nucleolus is the main depository of RNAr, which binds to the corresponding proteins. The genes responsible for the synthesis of RNAr constitute a long stretch of RNA, all the same, repeated hundreds of times (this phenomenon is given the name of redundancy: it corresponds to the need to intensify the production of a certain type of RNA and guarantee its production). Each gene prints a chain of RNA, as in the case of RNAt and RNAm.

RNAt (transfer RNA, or transport) is so called because it transports the amino acids (scattered in the cytoplasm) to the place of protein synthesis, that is to the point where the ribosome (flowing along the RNAm) "sews" the amino acids together in the ordered series of the polypeptide. It is also called RNAs (soluble) because it is a relatively small molecule, free to circulate in solution.
When the messenger RNA specifies, through a codon, the insertion of a certain amino acid, this is not taken directly from the cytoplasm, but is first activated in the presence of a special enzyme and ATP (which provides energy by transferring it to the amino acid) , after which, it binds to a specific RNAt, which carries the reactive sites both to bind to the amino acid (specifically recognizing its side chain), and to attach itself to the ribosome and messenger RNA. In particular, the RNAt carrying the amino acid reacts with the messenger, as it has a special site, a triplet called anticodon, which is complementary to the codon according to the usual two rules of complementarity of nucleic acids.
The nucleotide sequence of some RNAt has already been ascertained, which generally appears to be within the range of 100 nucleotides.
All the RNAt end with a fixed triplet called CCA, which is destined to bind with the carboxylic function of the amino acid. Various hypotheses have been advanced on the spatial conformation of RNAt, including the hairpin one and the cloverleaf one. The latter is particularly suggestive because it has four reactive sites: the CCA terminal that binds to the carboxyl (and common to all amino acids), another constant triplet that binds to the ribosome (also constant), a specific triplet which binds to the specific amino acid side chain and the anticodon, which binds to the corresponding specific codon. 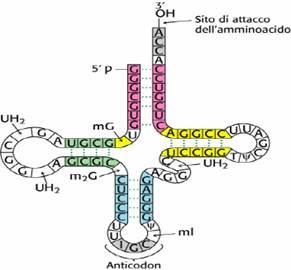