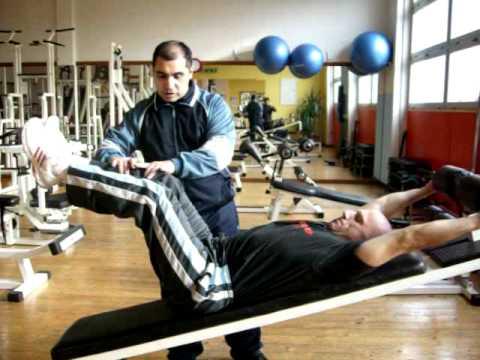 Reverse Crunch on Incline Bench is a monoarticular exercise

The starting position sees the athlete lying on his back on an incline bench with his hands grasping fixed points usually located behind the head. The back is extended, the hips can be flexed 90 ° (monoarticular variant), or extended (biarticular variant), while the knees can be flexed (easy) or extended (difficult). The execution consists in performing a complete flexion of the hips (in the case of the bi-articular variant) followed by a flexion of the lumbar spine (in the case of the monoarticular variant, the exercise begins with this action) by pushing the knees (variant with knees bent) or feet (variant with knees extended) upwards (very difficult; also known as rising flag) or towards the head (traditional reverse crunch). All unaffected joints should remain motionless. By performing the "rising flag" exercise, the hips partially extend. In any variant, it is necessary to avoid exerting excessive traction force through the upper limbs which must be limited to preventing the athlete from slipping due to the inclination of the bench.

Muscles involved in the Reverse Crunch exercise on the incline bench


Action
Flexion of the column

add a comment of Reverse Crunch on Incline Bench