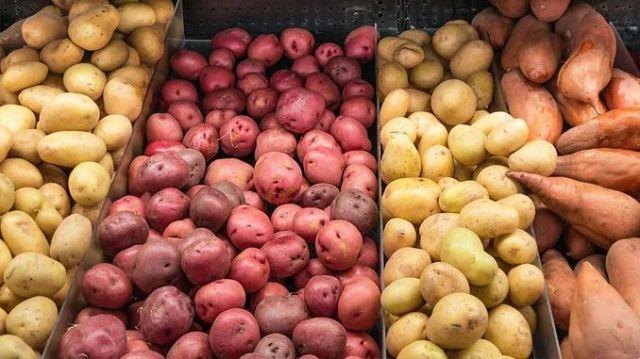 When we talk about red potato we can mean sweet potato also called American potato or the red pulp or skin potato of some particular potato varieties.

In the case of the sweet potato or red batata we are talking about the Ipomea batatas plant which produces an edible tuber with red to brown skin and yellow to orange pulp. This yam is native to South America and was then imported by Christopher Columbus in the Old Continent where, however, it has not found a great diffusion. The classic potato, which in history had become one of the basic ingredients for the population of the time, was much more fortunate.

Returning instead to the red yam is its composition of nutrients it is rich in many vitamins including A, B, C, and E as well as numerous mineral salts such as calcium, iron, potassium and magnesium.

Plus the red yam is rich in anthocyanins and flavonoids which in addition to making it an excellent antioxidant they also give it its typical color between yellow, orange and red.

These antioxidant substances of which the potato is rich they are able to counteract the free radicals of the body responsible for cellular aging. So eating red yam helps keep us young longer as well as having an excellent supply of nutrients.


Batata is usually used stir-fried, boiled, stewed and of course baked or fried. The recipes are countless thanks to its sweet taste which also sees it used in preparations for desserts, cakes but it can also be eaten raw and with the peel maybe grated in a salad or in a mix of vegetables.

Eating raw potato greatly increases the beneficial effect of this food because it retains all its nutrients and in particular in its peel there is cajapo which is a substance that regulates blood sugar and cholesterol. The raw consumption of potato as in Japanese cuisine sees that the population that eats it has less incidence of diseases such as anemia, diabetes and hypertension.

The biggest difference between the sweet potato and the potato is precisely the possibility of being able to use the potato even raw while the common potato must always be cooked.

In fact, the potato is also prepared by keeping the peel which is rich in nutritional and beneficial substances. Therefore just wash the peel of the sweet potato thoroughly and start cutting it.

To you the fantasy of making it in strips, slices, grated, in chunks or curls, however you slice it will always be excellent. A drizzle of extra virgin olive oil, salt and some spice will make this sweet potato a excellent crudité to accompany other raw vegetables such as tomatoes, cucumbers, various types of salads, rocket, radicchio but also olives, corn and why not even some edible flowers such as nasturtium, calendula or violet.


The batata can then be prepared cooked in the same way we cook the classic potatoes among the most loved recipes especially by children we have the potato chips. To prepare this recipe you only need to cut the sweet potato into thin slices and fry them in boiling oil until golden brown. The batata is also loved to prepare sweet recipes such as pancakes and cakes.

There are some varieties of potatoes that have a red skin or, more rarely, a red pulp. They are normal potatoes that were born naturally and then selected by farmers because they are rich in nutritional and beneficial substances. Eg the Cetica Red potato is a variety of potato grown in Tuscany in the Cetica area which has a savory and slightly salty taste.

This peculiarity of being red and with such an appreciable flavor, has made this potato highly sought after in local markets. Altre patate rosse sono presenti sul territorio del paese and they are usually richer in antioxidants and pigments than normal yellow or white flesh potatoes.

Furthermore they contain vitamins such as A and C in addition to many mineral salts. In particular, they are rich in potassium which is used to regulate blood pressure and their consumption even allows you to regulate blood sugar levels because it acts on the body's insulin.


The flavor of these potatoes can also be sweet and the consistency is usually floury. The recipes of traditional use are the most varied with these potatoes.

The potato is one of the ingredients we know and use most in the kitchen, in fact its recipes range from preparation first courses such as gnocchi with condiments as a sauce with potatoes.

They are still used to make seconds like tsalted vegetables, omelettes and stews combined with other ingredients but also as a side dish of meat and fish. Finally, the potato is also excellent in baked products such as focaccia or in desserts such as pancakes and other recipes for cakes and fillings.

In the case of the red potato, being tasty and savory, it is well appreciated, for example in one farifrittata of onion and potato. This recipe is similar to the preparation of a classic omelette except that chickpea flour is used instead of eggs.

In fact, the basic compound is made up of chickpea flour, water, olive oil and salt which must be well homogeneous and not too liquid. In this mixture, add finely chopped onion and red potato and then pour everything into a non-stick pan suitable for the omelette. Once cooked, farifrittata can be served hot or even at room temperature.

add a comment of Red potatoes, properties and recipes