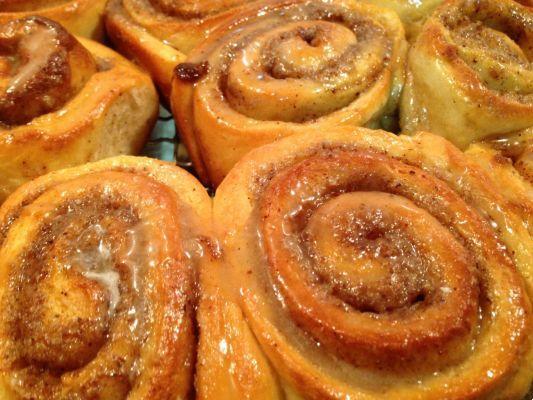 Cinnamon is a spice widely used in the kitchens of many places around the world. It has something exotic but also very familiar; is, in fact, one of the ingredients of many traditional popular dishes and the country; our grandmothers also used it for quality of natural preservative.

It comes from afar, but also from up close, and it is grown a little in every part of the world.

It has many beneficial qualities and, always our grandmothers, used decoction and herbal tea cinnamon as a natural anti-inflammatory.

In the kitchen, it is a essential ingredient and it can be used in many recipes. For example, have you ever tried cinnamon rolls?

Cinnamon rolls are leavened dough rolls from Northern European countries, also very popular in the United States. To prepare them it takes a little patience, but it's worth it, because they are a really greedy sweet, suitable for breakfast, but also for other moments of the day.

Sure I'm not light, just don't overdo it!

Preparation
Pour 600 g of flour, 80 g of sugar, dry yeast and a teaspoon of cinnamon into a bowl and mix everything together. Melt the butter with the milk on the stove e let it cool down.

In another bowl, beat the egg and then add the milk and butter and mix the mixture with a wooden spoon. At this point, slowly add the dry ingredients previously mixed in the other bowl, always working with the wooden spoon.

Once all the ingredients have been combined, work the dough, with your hands or in the planetary mixer, until you get a smooth and homogeneous ball, which comes off easily from your hands. If the mixture is sticky, help yourself by adding a little more flour.

Place the ball of dough in a bowl greased with butter and covered with plastic wrap e let rise until doubled in volume.

At this point roll out the dough with a rolling pin, obtaining a rectangle about one centimeter thick and brush the surface with 15 g of melted butter. Be careful to flour the work surface well, so that you can easily detach the dough in the next step.


Mix the granulated sugar with the cane sugar and cinnamon. Roll up the rectangle of dough by tightening it well and being careful not to break it.


Cut many wheels of about 3 cm thick (12 should come with this quantity) and place them in an oven pan; distance them about 1 cm from each other. Cover with plastic wrap or a damp cloth and leave to rise for an hour. Bake in a static oven at 180 ° C for about 30 minutes, or in a convection oven at 165 ° C for about 20 minutes.

Cinnamon rolls are very fluffy, but they tend to harden quickly, so they keep well for a couple of days at the most and should still be kept in an airtight container. To keep them longer it is advisable to freeze them and take them out if necessary.

For an even richer and more delicious flavor, sultanas or dried fruit can be added to the inside. For a even more intense cinnamon flavor you can increase the doses at will.

add a comment of Recipes with cinnamon: cinnamon rolls