Rationalization, the defense mechanism by which we deceive ourselves 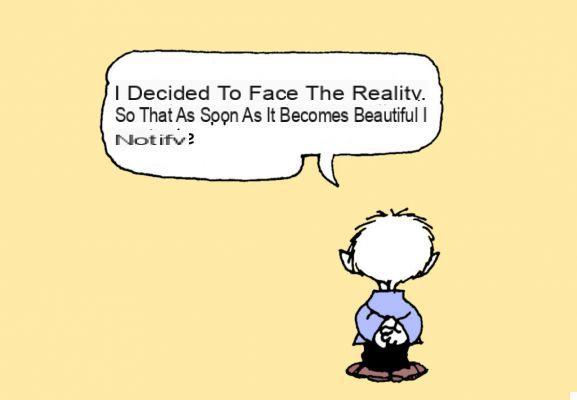 Rationalization is a defense mechanism that no one escapes. When things go wrong and we feel cornered, we can feel overwhelmed and therefore are unable to cope with reality adaptively. When we experience particularly threatening situations for our "I", we tend to protect ourselves to maintain a certain psychological balance that allows us to move forward with the least possible damage to our ego. Rationalization is probably the most widespread defense mechanism.

What is rationalization in psychology?

Basically, rationalization is a form of denial that allows us to avoid the conflict and frustration it generates. How does it work? We look for reasons - apparently logical - to justify or hide errors, weaknesses or contradictions that we do not want to accept or that we do not know how to manage.

In practice, rationalization is a rejection mechanism that allows us to deal with emotional conflicts or internal or external stressful situations by inventing reassuring but incorrect explanations for our or other people's thoughts, actions or feelings in order to cover up the real motives.

The mechanism of rationalization, trapped by what we do not want to recognize

In a general sense, we resort to rationalization to try to explain and justify our behaviors or what happened to us in an apparently rational or logical way, so that those facts become tolerable or even positive.

Rationalization takes place in two stages. In the beginning we make a decision or implement a behavior motivated by a certain reason. In a second moment we construct another reason, covered with an apparent logic and coherence, to justify our decision or behavior, both towards ourselves and towards others.

It is worth noting that rationalizing does not imply lying - at least in the strictest sense of the word - as many times one actually ends up believing in constructed reasons. The mechanism of rationalization follows paths that depart from our consciousness; that is, we do not knowingly deceive ourselves or others.

In fact, when a psychologist tries to unmask these reasons, it is normal for the person to deny them because he is convinced that his reasons are valid. We cannot forget that the rationalization is based on an explanation which, although false, is plausible. Since the arguments we propose are perfectly rational, they manage to convince us and therefore we do not need to recognize our inability, error, limitations or imperfections.

Rationalization acts as a dissociation mechanism. Without realizing it, we establish a distance between the "good" and the "bad", attributing the "good" and rejecting the "bad", to eliminate the source of insecurity, danger or emotional tension that we do not want to recognize. In this way we are able to "adapt" to the environment, even if we do not really resolve our conflicts. We save our ego in the short term, but we don't protect it forever.

Neuroscientists at the University of California have found that the rationalization mechanism can activate quickly when we have to make difficult decisions or are faced with ambivalent conflicts, without prolonged reflection, simply as a byproduct of decision-making to relieve anxiety. , psychological distress and cognitive dissonance determined by the decision-making process itself.

Therefore, we are not always aware of rationalizing. Nevertheless, this denial will be more or less intense and lasting depending on how much we perceive the more or less threatening reality for our "I".

Examples of rationalization as a defense mechanism in everyday life

Rationalization is a defense mechanism that we can use without realizing it in daily life. Perhaps the oldest example of rationalization comes from Aesop's tale "The Fox and the Grapes".

In this fable, the fox sees clusters and tries to reach them. But after several failed attempts, he realizes they are too high. So he despises them saying: "They are not ripe!".

In real life we ​​behave like the fox of history without realizing it. Rationalization, in fact, performs various psychological functions:

• Avoid disappointment. We can use rationalization to avoid being disappointed in our abilities and to protect the positive image we have of ourselves. For example, if a job interview went wrong, we can lie to ourselves by telling ourselves that we didn't really want that job.

• Don't recognize limitations. Rationalization saves us from having to recognize some of our limitations, especially those that make us uncomfortable. If we go to a party, we can say that we don't dance because we don't want to sweat, when the truth is that we are ashamed of dancing.

• Escaping guilt. We tend to put into practice the rationalization mechanism to hide our mistakes and block the sense of guilt. We can tell ourselves that the problem that worries us would have arisen anyway or think that the project was doomed from the start.

• Avoid introspection. Rationalization is also a strategy for not delving into ourselves, usually out of fear of what we might find. For example, we can justify our bad mood or rude behavior with the stress we developed in a traffic jam when in reality these attitudes could hide a latent conflict with that person.

• Don't acknowledge reality. When reality exceeds our capabilities to face it, we resort to rationalization as a defense mechanism to protect us. A person in an abusive relationship, for example, may think that it is his fault for not recognizing that his partner is an abusive person or that he does not love him.

When does rationalization become a problem?

Rationalization can be adaptive as it protects us from emotions and motivations that we would not be able to handle at that time. We can all put some defense mechanism into practice without our behavior being considered pathological. What makes rationalization really problematic is the rigidity with which it manifests itself and its prolonged extension over time.

Kristin Laurin, a psychologist at the University of Waterloo, has in fact conducted a series of very interesting experiments in which she shows that rationalization is often used when it is believed that problems have no solution. Basically, it's a kind of surrender because we assume it doesn't make sense to keep fighting.

In one of the experiments, participants read that reducing speed limits in cities would make people safer and that lawmakers had decided to lower them. Some of these people were told that the new traffic rule would go into effect, while others were told that there was a possibility that the law would be rejected.

Those who believed that the speed limit would be reduced were more in favor of the change and looked for logical reasons to accept the new provision than those who thought there was a possibility that the new limits would not be approved. This means that rationalization can help us face a reality that we cannot change.

However, the risks of using rationalization as a habitual coping mechanism usually far outweigh the benefits it could bring to us:

• We hide our emotions. Repressing our emotions can have devastating long-term effects. Emotions are there to signal a conflict we need to resolve. Ignoring them usually does not solve the problem, but they are likely to end up encrusted, hurting us more and perpetuating the maladaptive situation that generates them.

• We refuse to recognize our shadows. When we practice rationalization as a defense mechanism we can feel good because we are protecting our image, but in the long run, not recognizing our weaknesses, mistakes or imperfections will prevent us from growing as people. We can only improve when we have a realistic image of ourselves and are aware of the qualities we need to strengthen or refine.

• We move away from reality. Although the reasons we seek may be plausible, if they are not true because they are based on faulty logic, the long-term results can be very bad. Rationalization is usually not adaptive because it takes us further and further away from reality, in a way that prevents us from accepting it and working to change it, only serving to prolong a state of dissatisfaction.

The keys to stop using rationalization as a defense mechanism

When we lie to ourselves, we not only ignore our feelings and motives, but we also hide valuable information. Without this information, it is difficult to make good decisions. It is as if we are walking through life blindfolded. On the other hand, if we are able to appreciate the complete picture in a clear, reasonable and detached way, however difficult it may be, we will be able to evaluate which is the best strategy to follow, the one that causes us less damage and this , in the long run, it brings us greater benefits.

This is why it is important to learn to recognize our emotions, impulses and motivations. There is a question that can take us very far: "why?" When something bothers us or makes us uncomfortable, we simply have to ask ourselves why.

It is important not to settle for the first answer that comes to mind because it is likely to be a rationalization, especially if it is a situation that particularly disturbs us. We must continue to investigate our motives, asking ourselves why until we reach that explanation that generates intense emotional resonance. This process of introspection will pay off and help us get to know each other better and accept ourselves as we are, so we will have to resort less and less to rationalization.

Rembrandt: the secret of his magic touch ❯

add a comment of Rationalization, the defense mechanism by which we deceive ourselves