Quinoa, why eat it 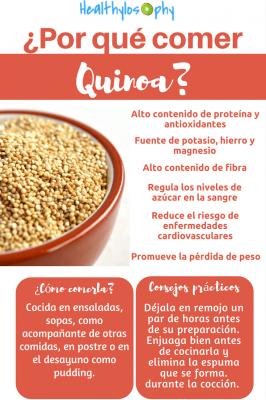 La Quinoa is a pseudocereal gluten-free and rich in high biological value proteins and is therefore a excellent food for gluten intolerant and for those who have chosen a vegetarian or vegan diet.

La Quinoa (Chenopodium quinoa) is a herbaceous plant native to South America, belonging to the Chenopodiaceae family. Quinoa is particularly widespread in the Andean highlands where it is still cultivated today thanks to its adaptability to the climate.

Quinoa has a large, more or less branched, green or red stem, lobed leaves and panicle inflorescences. Quinoa fruits are small and can be white, white, black or red depending on the cultivar.

After the Spanish conquest, the cultivation of quinoa was almost completely abandoned and replaced by wheat. For some time, quinoa was considered a food for the poor but in the last period this food has returned to the limelight and today quinoa seeds are back on our tables, even at the expense of sustainability.

La Quinoa it is considered a pseudocereal and is cooked and eaten like cereals. Unlike many grains, however, quinoa does not contain gluten, therefore it can also be taken by celiac people.

In quinoa instead all twenty necessary amino acids are present to protein synthesis in the right proportions, including Lysine, an essential amino acid normally absent in cereals.

La proportion of amino acids in a food it is particularly important since protein synthesis is limited when an amino acid is deficient.

Amino acids are the building blocks of proteins. When we take proteins from a food, these proteins are absorbed and the body obtains amino acids from them necessary to make new proteins that will make up our tissues, for example muscle tissue, or that will play a functional role in our body, as in the case of enzymes or transport proteins.

In quinoa this problem does not arise since the protein profile of this pseudocereal is complete. Quinoa should therefore never be missing on the table of those who have chosen a vegetarian or vegan diet or of people with gluten intolerance.

Read also How to use quinoa seeds >>

Audio Video Quinoa, why eat it
Glyphosate: in which foods, toxicity and consequences ❯