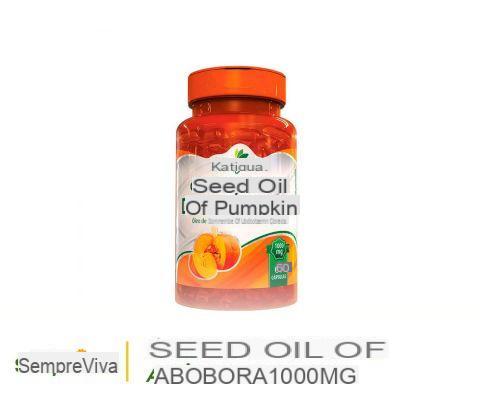 In countries likeAustria, Germany and Romania, the oil obtained from pumpkin seeds it is a food that is usually and traditionally used in the kitchen to dress various salads, grilled meats, soups and soups and much more.

The oil even comes protected by the European Union through the IGP, Protected Geographical Indication mark, and the areas to which they belong are proud of their production.

This type of oil, which is obtained from the cold pressing of the seeds of the homonymous plant, without peel and toasted, is gathering renewed interest also in the phytotherapeutic and nutritional fields. In the country it is little used, surpassed as it is by olive oil. Let's get to know its properties.

The properties of pumpkin seed oil

Very dark green in color, fragrant, with a particular taste, reminiscent of hazelnut, but delicate, the oil of pumpkin seeds it is to be considered a healthy food.

In fact, the content of Vitamin E. It is also an oil rich in oleic and linolenic acid, therefore lipid-lowering, low in fat, and excellent ally in prevent atherosclerotic diseases.

Pumpkin seeds ground and mixed with honey are among the oldest methods of treatment that are used by the countries that traditionally use them. Pumpkin seeds are in fact considered a valid remedy for men who have prostate problems.


They are also rich in zinc and, thanks to the presence of active substances, are excellent natural remedies against skin eczema, weakening and hair loss. If this were not enough and praise its excellent properties, we add the betasterol, substances similar to androgens and estrogens, very valid allies in fighting and lowering cholesterol levels.

Finally, at the faculty of biochemistry in Graz, it was found that pumpkin seed oil contributes significantly to human well-being and health, in particular protects against free radicals, essendo particularly rich in antioxidants and for this also used in cosmetic preparations.

One of the most popular pumpkin seed oils is the Styrian one, an Austrian region and place of production closest to the country, where the city of Graz is located. Here it is considered a very precious food, also called black gold. Here is a typical recipe, the Styrian-style pumpkin soup.

Preparation: chop the onion and brown it in a pot with a little cooking water, add the peppers and the diced pumpkin. Leave to cook gently and pass everything through a vegetable mill. Add the water, garlic and herbs to the mixture and season with salt and pepper. Finally, complete the recipe by adding Styrian pumpkin seed oil raw.

Curiosity: Pumpkin seeds are one of the favorite pastimes in Romania: they are eaten by everyone on the roadsides, a highly healthy vice! Peeled are also widely used in the bakery industry.

Pumpkin seeds are also a remedy for prostate ailments

To learn more:
> The properties, nutritional values ​​and benefits of pumpkin

Audio Video Pumpkin seed oil
Russello wheat: properties, use and where to find it ❯