Pull to the Chin | Execution, Muscles Involved and Variants

Pull to the Chin

The pulls to the chin (also known by the English expression "upright row") are a multi-joint exercise used to train the upper back and shoulders.

The most common variation of this exercise involves the use of a municipality outrigger. Below are the main instructions to perform it correctly.

1. Hold the bar with presa property, with the hands at a distance less than shoulder-width apart (it is usually suggested that newbies start with ahandle about half the width of the shoulders. A practical method to determine an adequate grip is to space the hands so that the thumbs, facing inwards, almost touch the center of the bar.)

2. Place your feet shoulder-width apart, keep your knees slightly flexed and slightly arch the lumbar region in such a way as to assume a solid support base (in reality this suggestion is valid for all exercises performed in an upright position with weights. free).

3. The starting position requires the arms to be extended downwards, with the barbell located more or less in the middle of the thigh.

4. Pull the bar straight up in front of you, flexing the elbows, till about at the height of the chin (according to some experts it is good to reach up to the height of the mouth or even the forehead). Throughout the concentric phase (or positive, that is, during the phase in which the bar is pulled upwards), keep always elbows higher than the wrists. For best performance, imagine that your hands are hooks / hooks that simply hold the bar, while focusing on the elbows as the leading body segment.

5. Return to the starting position slowly and precisely, controlling the bar in the descending phase (this phase, called eccentric or negative, should have a duration at least equal to that of the concentric phase).

6. Repeat the gesture for the preset number of repetitions (usually 3-4 sets of 8-15 repetitions each).

In order to make the exercise more profitable and minimize the risk of injury, try to keep your knees and back as still as possible, avoiding to exploit the inertia of the movement and do not be approximate in the eccentric phase of the exercise. 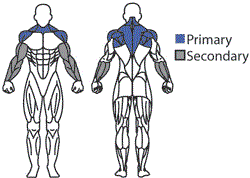 The muscle groups primarily involved in this exercise are the trapezius and deltoid and, to a lesser extent, the muscles of the upper back (rhomboid and large round), which all collaborate together in the pulling gesture, that is, in lifting the barbell upwards, keeping the elbows up.

Traditionally, it is believed that with a tighter grip, more emphasis is placed on stimulating the upper portion of the trapezius muscle, while a wider handle stimulates more the bundles of the deltoid muscle (especially the middle bundle and the posterior one) than the trapezius.

Other muscles, not primarily stimulated in lifting but however secondarily involved in this exercise are the brachial biceps muscle (flexing his arms) and the flexor muscles of the forearm (which allow the grip on the barbell), in addition of course to the stabilizing muscles, which allow you to maintain a correct posture throughout the movement (a long series of muscles of the legs, back and abdomen collaborate in this aspect).

Still in the context of barbell chin pulls, which are the best known and most used variant, there is a heated debate on which is the most profitable positioning of the hands, i.e. whether it is better to perform the chin pulls with a close grip or a wide grip. .

La tight grip (hands at a distance less than shoulder width) allows you to take advantage of a wider range of motion and favors more stimulation of the upper part of the trapezius with respect to the deltoids. 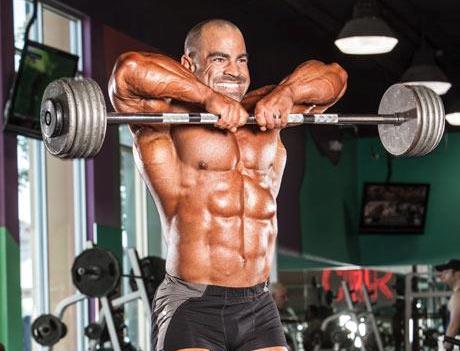 La long dam (hands at a distance equal to or greater than the width of the shoulders) has the advantage of being less traumatic at the level of the shoulder and wrist joints, it favors the stimulation of deltoids compared to trapezes and, generally, allows you to use higher loads than the narrow grip. 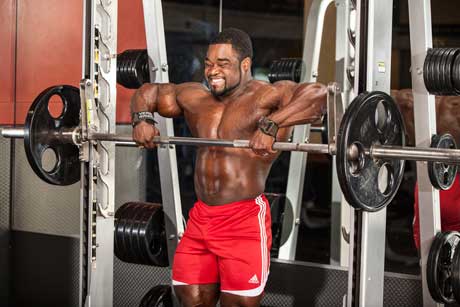 In my opinion, it is not possible to decide whether one technique is superior to the other in absolute terms. The choice must be individualized on the basis of the biomechanical characteristics of the individual subject and the objective (to stimulate more the trapezius or deltoids).

In any case it is good to keep in mind that this choice is not to be considered definitive; indeed, changing the handle from time to time can help stimulate the various muscle groups in a slightly different way and, ultimately, favor hypertrophy and / or increase in strength.

In addition to the classic variant with a simple barbell, it is also possible to perform chin pulls with a shaped barbell, with two dumbbells, with low cables, the Smith machine (or Multipower, if you prefer) and with a kettlebell.

Like all exercises, especially those with free weights and, even more so, multi-joint ones, chin pulls can facilitate or cause musculoskeletal injuries.

From the biomechanical point of view, the pulls to the chin involve, at the shoulder level, an important internal rotation of the humerus head. This phenomenon is physiologically opposed by the rotator cuff (in this case, by the supraspinatus, infraspinatus and teres minor muscles by their relative tendons). The rotator cuff is a particularly "delicate" part of the body and prone to injury, even in individuals not involved in intense physical activity, so any additional stress on it could increase the risk of injury.

In light of this, chin pulls should be used with caution by people with shoulder problemsand especially by those who have been diagnosed with rotator cuff injuries (even, a part of the scientific community and trainers has gone so far as to completely advise against performing chin pulls not only in subjects with shoulder problems, but even, for preventive purposes, in healthy subjects. this extremist approach is to be considered at least exaggerated and not very acceptable).

As with many other exercises, the main strategy to minimize the risk of injury is touse a precise execution and a not excessive load (my advice is to always use loads that you are able to easily manage for about 10 and in any case not less than 5-6 repetitions; in this regard, I like to quote a sentence from the famous Dominican bodybuilder Victor Martinez: "never sacrifice the form for the weight!"). Furthermore, even if very often this aspect is neglected, I advise everyone to permanently include specific work for the reinforcement of the rotator cuff in your routine.

Finally, especially if you use a very tight grip and high loads, chin pulls can create problems at the wrist. A simple device designed to limit this kind of inconvenience is the use of wrist protectors.

My Experience and My "Verdict" 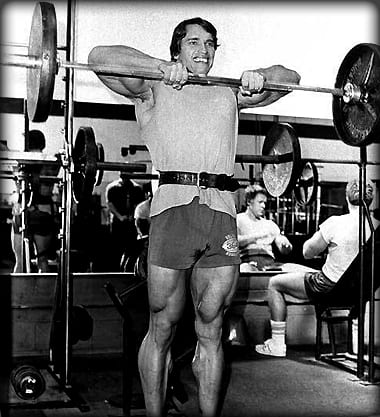 Among the readers of this blog, I don't know how many, like me, started weight training in the pre-social network era. Well, if you are among these "veterans", it is very likely that you too, like me, were struck by and inspired by the vision of the legendary docu-film "Pumping Iron". In one of the final scenes of the film they are seen Arnold Schwarzenegger e Lou Ferrigno warming up in the pump up room, before the 1975 Mr Olympia finals, performing a series of chin pulls facing each other, almost in unison, as a challenge. It goes without saying that chin pulls have quickly become a staple on my shoulder training sheet.

About 10 years later, although my approach to training is certainly less emotional and childish (but no less enthusiastic), chin pulls are still one of the exercises I do regularly; in particular, currently, I perform the variant with the barbell and with the tight grip and I try to put more emphasis on stimulating the trapezius. Therefore I have inserted them at the end of the card for the training of the back, rather than in that of the shoulders.

In conclusion, I feel I can state that chin pulls are an important exercise, to be added, at least from time to time, to the routine ofback and / or shoulder training.

Audio Video Pull to the Chin | Execution, Muscles Involved and Variants
Toe taps | How are they performed? Muscles involved and common mistakes ❯

add a comment of Pull to the Chin | Execution, Muscles Involved and Variants