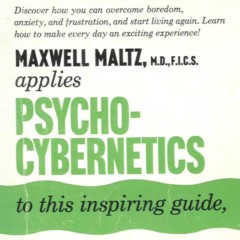 "Having low self-esteem is like living with the handbrake on."

I'm going back to the column “the book of the month” (here you can find the other books reviewed) with a book that fascinated me enormously. It had been years since I hadn't been so inspired by a personal growth book and for this I sincerely thank the reader who recommended it to me.

Let's not get lost in small talk and let's talk about this month's book: Psicocibernetica di Maxwell Maltz.

Between us ... what credit would you give to a book called ... Psycho-cybernetics ?! I guess an evaluation between: megagalactic whore and space bale. Quite right? Here, the wonder of this book is that not only does it make you think again after a few pages, but it gives you the impression that all the other personal growth books have been written by babies. But let's get to know the author and his book a little better.

Maxwell Maltz was an American plastic surgeon (yes, you read that right, a ... plastic surgeon!), Who lived in the last century (1899 - 1975) and who owes his fame to the best-selling Psychocybernetics.

As far as plastic surgery may appear to be psychology and from personal growth, from the first pages of the book it is immediately understood how the author's profession has profoundly influenced his studies on the human mind. As Dr. Maltz, many of his patients, more than had surgery on their body, needed surgery on their soul.

As mentioned, Maxwell Maltz owes his fame to a book that was published for the first time in 1960, entitled, at least curiously: Psychocybernetics.

In order to avoid the classic prejudices deriving from Hollywood science fiction films, let's try to understand the origin of this curious title. There cybernetics is the science that studies the phenomena of self-regulation and communication, both in the natural organisms (or also the human being) as well as in artificial systems. Cybernetics therefore arises as an interdisciplinary field of study between science and engineering (now you understand why this book struck me ?! ;-). The term cybernetics was coined in 1947 by the American mathematician Norbert Wiener, deriving it from the Greek Kybernetes, which can be translated with the term: helmsman, pilot.

In Maltz's book, cybernetics is applied to psychology; hence the term: Psychocybernetics.

According to the author, in fact, nature has equipped us with a servo-mechanism (our mind), which if used correctly allows us to reach any goal we decide to set ourselves ... exactly as an automatic missile system is able to hit a target.

Beyond the engineering references (mostly present in the first part of the book), the author's true intuition concerns: the image of the ego. This concept, taken up several times by modern psychology, is able to explain why certain individuals manage to achieve success and others instead struggle in the same intent.

The book details the mechanisms that determine our self-esteem and the correct image of our ego, as well as many other topics dear to personal growth enthusiasts, such as:


But in summary what is this book about? Using the words of Maltz himself, we could say that Psycho-cybernetics speaks of a new method to give more life to our life.

Let's face it: everyone has the personal growth book they deserve! and what's better for an engineer passionate about psychology and self-help than a book that blends… psychology and cybernetics ?! Maybe it was my particular background that drove me to buy this book and get hooked… but after hundreds of reading on the subject, I would say I have the basis for distinguishing a good self-help book from a junk book. Having said that ... once replying to a reader I wrote:

"The whole library of personal growth is really of little use: sometimes I think it would be enough to find just one right book, read it and apply it to the end".

If I were asked today what that one book I would like to read would be, this would be Maxwell Maltz's best-seller: Psychocybernetics.

Reverse psychology: how to use it in love and to win back an ex ❯