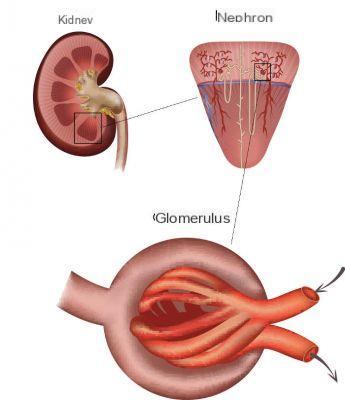 Proteinuria is the presence of more than 150 mg / day of protein in the urine.
The causes can be classified according to the mechanism of onset. In most cases, proteinuria is the consequence of glomerulopathies, which usually manifest as nephrotic syndrome. The latter is characterized by a clinical picture of severe proteinuria (> 3,5 g / day) with edema, hypoalbuminemia, hyperlipidemia and lipiduria. Nephrotic syndrome can represent a primary process (glomerulonephritis) or secondary to a systemic disease (eg diabetic nephropathy, pre-eclampsia, infections, lupus nephritis and amyloidosis).
The high concentration of proteins determines the production of foamy urine, more or less dense. Proteinuria is present in many kidney disorders and is associated with other urinary abnormalities (eg hematuria). The isolated form, on the other hand, manifests itself without other symptoms.

Functional proteinuria is a temporary increase in protein excretion in the urine caused by glomerular haemodynamic changes. In particular, the increase of proteins in the urine occurs when the increase in renal blood flow pours greater quantities of the same into the nephron. This can result from strenuous physical activity, fever, dehydration, and emotional stress. Functional proteinuria reverses when renal blood flow returns to normal.

A particular, relatively common type of functional proteinuria is called orthostatic or postural. This is a benign condition, typically seen in people under the age of 30 with preserved kidney function. In this context, proteinuria is moderate and occurs mainly when the patient is in an upright position (excretion of less than 2 g of protein per day), while it is absent after a period of bed rest, such as after a night's rest. Therefore, urine typically contains a higher amount of protein during the waking hours. In general, orthostatic proteinuria follows, like functional proteinuria, a benign course, often with spontaneous resolution.

Glomerular proteinuria results from diseases of the renal glomerulus, which usually involve an increase in permeability at this level; this allows more plasma proteins to pass into the filtrate. Proteinuria can result from primary glomerular disorders, such as membranous nephropathy, minimal change glomerulonephritis, and focal segmental glomerulosclerosis.
On the other hand, important secondary causes include diabetes mellitus, use of certain drugs (including NSAIDs and antibiotics), infections (HIV, hepatitis B and C, post-streptococcal disease, syphilis, malaria and endocarditis), infiltrative processes (such as amyloidosis) and pre-eclampsia. Glomerular proteinuria can also derive from autoimmune pathologies (such as lupus nephritis) and malignant neoplasms (eg colon, stomach or lung carcinoma and lymphoma).

Tubular proteinuria results from renal tubulointerstitial abnormalities that prevent reabsorption of proteins by the proximal tubule.
Causative factors are often accompanied by other defects in tubular function (eg bicarbonate loss and glycosuria) and, sometimes, by glomerulopathies.
Tubular proteinuria can be found in the presence of Fanconi syndrome, acute tubular necrosis, tubulointerstitial nephritis, and polycystic kidney disease.

* The symptom - Proteinuria - is typical of diseases, conditions and disorders highlighted in bold. By clicking on the pathology of your interest you can read more information on its origins and on the symptoms that characterize it. Proteinuria can also be a typical symptom of other diseases, not included in our database and therefore not listed.