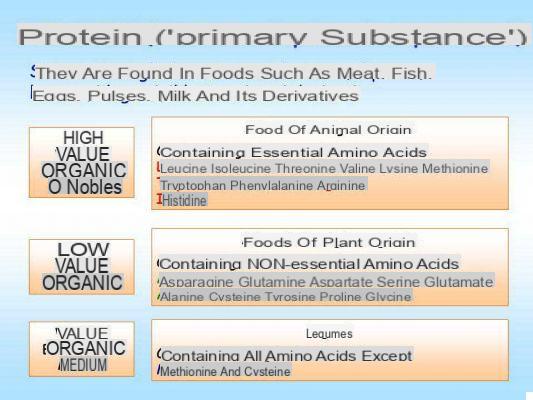 In this article we will talk about proteins, generally what they are and their functions, but also about their compositional importance and their biological value.

These notions are essential to say the least not only from a biological point of view, but also from a sporting point of view, since in the athlete and in the bodybuilder, protein synthesis is the basis of muscle recovery and growth.

What they are and some chemistry

Proteins (polypeptides) are macro-molecules or polymers of variable number (from a few tens to several hundreds) composed of sequences of amino acids (AA) - quaternary molecules, formed by carbon (C), hydrogen (H), oxygen (O) and nitrogen (N). In nutrition, the latter are considered energetic macronutrients - since it is possible to obtain them through various processes 4 kcal / g - but, from the point of view biological, in their entirety proteins boast numerous and specific functions.

Amino acids contain functional groups several, including an amino group (NH2) and a carboxylic acid group (COOH). In nature there are about twenty amino acids which, combining otherwise, they can form tens of millions of different proteins, just as the letters of the alphabet form countless words. The naturally occurring amino acids are all α-amino acids and have at least one chiral carbon (that is, linked to functional groups all different from each other).

Some amino acids, called essential (AAE), DON'T they can be synthesized by the body and therefore must be supplied exogenously through food.

Il chemical bond among amino acids, said peptidico, is established between the COOH of one and the NH2 of the other, with condensation and loss of a water molecule. If the number of amino acids is lower of 10 this chain is a oligopeptide; 10-50 polypeptide; over 50 a protein properly said.

The peptide chains, in particular conditions, can be broken separating the amino acids of which they were composed. This demolition process is said hydrolysis and can be of type chemist o enzymatic; can take place during the digestion, making the amino acids absorbable via the intestine, or in the catabolism mobile phone. Each protein acquires specific properties based on the spatial arrangement it assumes that it is genetically determined.

Proteins play multiple functions and they have different tasks given their structural dynamism which easily tends to bind with other molecules. They provide essential amino acids for the performance of certain functions such as:

Di 20 naturally occurring amino acids, little more than the half it is to be considered essential - as we shall see, this approximation depends on the age and condition of the subject.

La synthesis of a protein therefore requires all the AAE. Being unable to self-produce, they will have to assume evaluation with la diet. This requires that the power supply meet the demand of the various AAEs in the right quantities e proportions; otherwise, the synthesis endogenous polypeptides it wouldn't happen satisfactorily.

Note: that is DON'T means that ad each meal should be introduced alone proteins with all the AAEs in the right quantities and proportions; the metabolic demand is not that high. In the periodic balance, however, especially for an athlete or a bodybuilder, this takes on a decisive role.

The composition in AAE, compared to the human protein model, is evaluated with the so-called criterion Value Biological (VB). It corresponds to amount di protein synthesized in the body than that swallowed with diet. For example, the biological value ofegg interoceptive and of 97 on a maximum of 100, which means that following the intake of 100 g of these proteins, the body "could synthesize" (as needed) 97 g of its own.

The proteins of animal origin they have on average a VB top than those of origin vegetable.

The value of amino acids present in a given protein is also said amino acid spectrum and represents the quantity of essential amino acids contained in it.

If a food contains "X" grams of proteins, these are broken down into amino acids usable for the synthesis of human proteins by the body, but when only one of these amino acids runs out, the synthesis ends precisely because certain specific building blocks are missing.

VB is therefore very important for protein synthesis, in turn determinant for the muscle recovery and for hypertrophic growth.

The VB is indicated by the relationship between the amount di nitrogen (N) withheld from the organism - after theabsorption - for endogenous synthesis. If we consider that:

Il coefficient di digestive use and the percentage of relationship between the amount of proteins introduced with the diet andabsorbed nitrogen.