Proteins are polymeric molecules composed of more than 100 amino acids bound by peptide bonds (shorter amino acid chains are called polypeptides or peptides); the structure of proteins can be more or less long, folded back on itself and fixed to other molecules (factors that determine their complexity and characterize their biological function). These structures can be classified into: primary structure, secondary structure (α-helix and β-sheet), tertiary structure and quaternary structure. 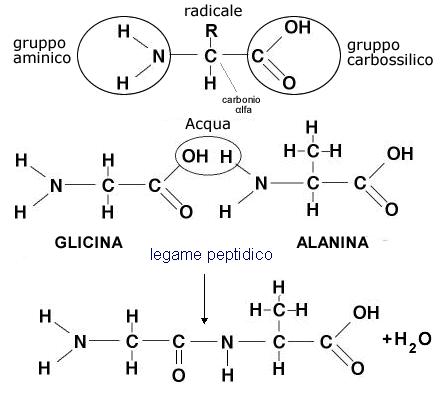 In nature, proteins perform many functions and the best known is undoubtedly the structural one; just think that every tissue matrix of our organism is based on a skeleton or polymeric mosaic made up of peptides (eg muscle fibers, bone matrix, connective tissue and, from a certain point of view, even blood).
No less important is the function of bio-regulation and chemical / hormonal mediation, in fact proteins are the basic constituents of both enzymes and many hormones.
In the blood, proteins also perform a very important transport function; this is the case of hemoglobin (transport of oxygen), of transferrin (transport of iron), of albumin (transport of lipid molecules), etc.
Still within the bloodstream, proteins prove to be useful as an immune defense; they constitute the ANTIBODIES, essential molecules produced by lymphocytes useful in the body's response against pathogens.
Finally, proteins - but more precisely amino acids - can be used for energy purposes through hepatic neoglucogenesis and provide 4 kilocalories (kcal) per gram. It is a rather complicated process which, through transamination and deamination, allows the body to produce glucose in conditions of hypoglycemia (possibly induced by fasting, particularly intense and / or prolonged muscular effort, adverse pathological or clinical conditions, etc.). Some neoglucogenic amino acids can also be ketogenic so their conversion determines the release of acid molecules called ketone bodies.
NB. The energy function of proteins should be marginal and subordinate to that of sugars and fats.

Amino acids are quaternary molecules made up of carbon, hydrogen, oxygen and nitrogen. More than 500 types are known and their combination differentiates countless forms of peptides. The ordinary ones, the L-amino acids, are 20: alanine, arginine, asparagine, aspartic acid, cysteine, glutamic acid, glutamine, glycine, histidine, isoleucine, leucine, lysine, methionine, phenylalanine, proline, serine, threonine, tryptophan, tyrosine and valine. From the metabolism of the latter it is possible to obtain a wide range of NON-ordinary or occasional amino acids which mainly constitute hormones, enzymes or intermediate molecules (carnitine, homocysteine, creatine, taurine, etc.).
Among the ordinary amino acids, some CANNOT be synthesized by the body and are called ESSENTIAL; for the adult man there are 9: phenylalanine, leucine, isoleucine, lysine, methionine, threonine, tryptophan and valine. In children, there are 11 in all; to the previous ones are added: histidine and arginine.
Other classifications of amino acids are: based on the polarity of their side chains (neutral apolar, neutral polar, acid charged, basic charged) or based on the type of radical group (hydrophobic, hydrophilic, acidic, basic, aromatic).

Among the essential ones there are also three amino acids called branched chain (BCAA), respectively: leucine, isoleucine and valine; the peculiarity that distinguishes branched chain amino acids from the others is represented by a different metabolic path of energy production.
As already explained, after transamination-deamination, most of the amino acids can be destined for neoglucogenesis and enter the Krebs cycle in the form of oxaloacetate or pyruvate. Ultimately, if there was a real need, some of the amino acids present in the bloodstream would enter the hepatocytes of the liver and exit in the form of glucose; for branched-chain amino acids this is not the case. Compared to the others, BCAAs are molecules that can be used DIRECTLY by the muscles, and this peculiarity makes them much more effective in direct energy production and in conversion for the reconstitution of glycogen reserves; it goes without saying that, if the organism is sufficiently nourished, the catabolism of branched amino acids represents an almost irrelevant neoglucogenic portion; glucose ALWAYS remains the primary energy source, therefore, in conditions of SUFFICIENT glycemia and glycogen reserves, even during an ordinary athletic performance there is no reason to fear that the muscle needs a surplus of branched amino acids.


Other articles on 'proteins and branched chain amino acids'

add a comment of Proteins and branched chain amino acids