The quality of any protein can be assessed using a classification system based on several variables:

BIOLOGICAL VALUE (VB or BV): represents the quantity of nitrogen actually absorbed and used net of urinary, fecal, skin losses, etc. A protein that has a perfect balance between absorbed amino acids and believed amino acids has a biological value of 100. The reference protein is that of egg which has a VB equal to 100%

PROTEIN EFFICIENCY RATIO (PER) : indicates weight gain in grams for each gram of protein ingested (3,1 for milk; 2,1 for soy)

NET PROTEIN UTILIZATION (NPU): represents the amount of ingested nitrogen that is retained by the organism.

LIMITING AMINO ACID : Represents that essential amino acid that becomes limiting for protein synthesis because it is contained in reduced quantities compared to other amino acids. In proteins of vegetable origin, this amino acid is generally not sufficient to guarantee the needs and must be introduced through the combination with other foods.

CONTENT IN ESSENTIAL AMINO ACIDS: proteins that contain all essential AAs in balanced quantities and ratios can be defined as complete or noble. In general, animal proteins are complete and vegetable proteins are incomplete. The term noble associated with vegetable proteins is incorrect and was introduced to counter the saying according to which "legumes are the meat of the poor". In reality, taking a good source of vegetable proteins in the diet is very important and to further enhance this concept the term "noble" has been improperly introduced. In any case, these deficiencies can be overcome simply by using appropriate food associations such as PASTA and BEANS. In this case we speak of mutual integration because the amino acids that the pasta is lacking are supplied by the beans and vice versa.


PDCAAS (Protein Digestibility Corrected Amino Acid Score o amino acid value corrected for protein digestibility): this is a new method for measuring the quality of proteins, based on the amino acid requirements of the human body. The PDCAAS, which has been adopted by the FDA and FAO / WHO as the ideal system for classifying protein quality, takes into account both the amino acid content and the digestibility of proteins. It is therefore an index similar to the chemical score, which instead of considering the egg protein profile as ideal, uses as a reference the optimal amino acid intake of 2-5 year old children; it also takes into account, very importantly, the digestibility of the protein considered. The age range taken into consideration (2-5 years) is the one in which the requirement of proteins per kg, therefore of single amino acids, is maximum.

The highest value of PDCAAS is 1.0, the minimum 0; therefore each protein with a value of 1.0 is considered complete for humans (after its digestion it provides, per unit, 100% or more of the essential amino acids required).

When relying on the PDCAAS to determine the quality of a protein, it is always necessary to take into account that the association of two incomplete but complementary protein sources (eg wheat and legumes) brings the overall PDCAAS of the meal closer to unity. 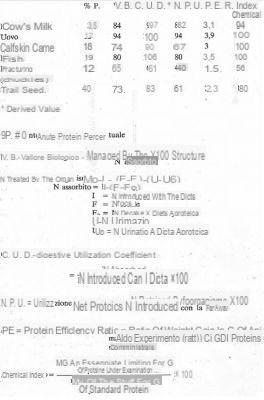