The presence of protein in the urine, also known as proteinuria, is a medical condition that occurs when there is increased renal protein excretion.
Normally, urinary protein levels are very low: within 24 hours, the proteins eliminated in the urine should not exceed 200 mg. In some cases, these values ​​may temporarily increase, without giving rise to particular concern. This can happen, for example, after strenuous physical activity or when you are sick.
In other circumstances, high proteinuria makes further tests necessary to understand if, at the basis of this finding, there is a more severe health problem, such as kidney damage.
The increase in protein in the urine could also be due to various other conditions, such as: anemia, heavy metal poisoning, cystitis, diabetes, gout and pregnancy. 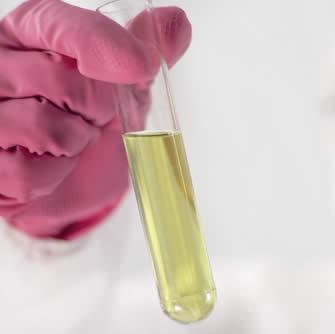 The significant presence of protein in the urine, which doctors usually indicate with the technical term proteinuria, it can be due to kidney damage or other serious conditions. Fortunately, higher than normal urinary protein concentrations can also fall within the physiological range, as occurs in particular situations, such as intense physical activity, fever and severe emotional stress.
In the blood of each individual there are many proteins, which are nothing short of essential for the organism; in fact, they perform transport (nutrients, gases, hormones, etc.), immune (defense against viruses, bacteria, etc.) and regulatory functions (metabolism, coagulation, pH and blood volume, etc.).
At the kidney level, the blood is purified of waste products and excess substances, undergoing a sort of sieving; the meshes of this very fine sieve are crossed by numerous substances, which end up in the filtrate to be reabsorbed or expelled through the urine, according to biological needs. All these substances do not include proteins, which, with the exception of the smaller ones, are almost absent in the filtrate and urine.

In the course of life it may happen that - due to pathologies or other problems (hypertension, diabetes, kidney infections, congenital malformations, etc.) - the meshes of the kidney sieve loosen, allowing greater quantities of proteins to pass. As a result, urine protein concentrations - assessed by a common test on a urine sample - increase significantly.
Based on the recorded value, by analyzing the urine collected over 24 hours, doctors talk about:

* Proteinuria is defined as a urinary excretion of protein greater than 150 mg per day; other sources raise this threshold to 300 mg, such that we are talking about below 300 mg / day microalbuminuria and above 300 mg / day we speak of proteinuria.

Proteinuria can indicate the presence of damage to the kidneys: generally, these organs do not let the molecules necessary for the body, such as proteins, pass into the urine. However, in the presence of certain diseases or particular conditions, these substances escape the renal filtration and are excreted.
For this reason, it is advisable to investigate the causes of the presence of too high proteinuria, especially if this is continuous.

When it is prescribed

Proteinuria is a parameter that is evaluated with theurinalysis. This is prescribed as part of routine testing or as a follow-up to a previous positive urinary protein test.
This feedback is useful to the doctor for:

In individuals with already known nephropathy (eg primary glomerulonephritis or diabetic nephropathy), the presence of proteinuria is a predictor of the risk of evolution to more advanced degrees of renal failure.

A semi-quantitative test called dipstick urinario (from the English dip-and-read test strip, therefore based on the use of test strips) is used as a screening test for the general population; if the result is positive, the test can be repeated after a few days to exclude occasional increases associated with non-pathological conditions. When the diagnosis is confirmed, or severe proteinuria is appreciated on the urinary stick, the urine is collected within 24 hours; it is also possible to evaluate the proportions and concentrations of the various plasma proteins by urinary electrophoresis (particularly important when it is suspected that the proteinuria is linked to an increased synthesis of plasma proteins, as occurs in multiple myeloma).
Reading the stick gives essentially qualitative information, which can be divided as follows:


Instead of the dipstick or the traditional 24-hour urinalysis, doctors are increasingly using a new technique based on relationship between urinary albumin concentrations (the most abundant plasma protein) and creatinine (a waste product resulting from normal muscle metabolism). This exam - also known as ACR, from English albumin-to-creatinine ratio - considers any situation in which more than 30 mg of albumin for each gram of creatinine (30 mg / g or 30 mcg / mg) is worthy of diagnostic investigations. Also in this case, when the values ​​are positive, the test is repeated after one or two weeks and - if the subject is positive again - it is followed by other in-depth tests to evaluate renal function.

As anticipated, hypertension and diabetes represent the two main risk factors for proteinuria, the incidence of which significantly increases with increasing age and BMI.
The presence of protein in the urine can also be associated with several other conditions and diseases, including:

In addition to these purely pathological circumstances, significant increases in urinary protein concentrations can also be associated with physiological conditions after all (in this case we speak of transient proteinuria). Exposure to cold or intense heat, fever, severe emotional stress and strenuous physical exercise (both sports and work), can in fact significantly increase the amount of protein found in the urine sample. Pregnancy may also be associated with mild proteinuria, although significant protein concentrations should suggest an ongoing urinary infection or the development of pre-eclampsia.
La proteinuria ortostatica it is a relatively common disease in children and young adults, which is associated with significant losses of protein in the urine during standing (orthostatic). Presumably, this condition is linked to the increased pressure on the renal glomeruli, which also forces the passage of proteins between the meshes of these filters. In the lying (reclining) position, pressure decreases and protein loss is reduced; doctors consider this disorder to be benign in origin, since in the vast majority of cases it regresses spontaneously with growth. Orthostatic proteinuria is diagnosed through a urine collection divided into 2 samples: one obtained in an upright position and one obtained at night, after the young patient has rested for a few hours and emptied his bladder before going to bed.

Protein in the urine: symptoms and treatment

Symptoms of proteinuria - generally absent in mild or moderate cases - include the presence of foam in the urine and edema, i.e. the abnormal accumulation of fluid in the interstitial spaces, due to a drop in plasma oncotic pressure. Water retention, with the onset of edema and swelling (especially in the hands, feet and ankles, then in the face and abdomen in the most severe cases), is however a late sign, typical of the more severe stages of proteinuria.
Treatment of proteinuria is aimed at eliminating, or at least controlling. the causes that led to the increase in the concentration of protein in the urine; hypertension, for example, can be controlled with ACE inhibitors or angiotensin receptor antagonists (ARBs).

The complete absence or low levels of protein in the urine are not associated with any particular type of pathology. For this reason, low levels of this parameter should not cause any kind of concern.
Some antihypertensive drugs - belonging to the class of ACE inhibitors (ramipril, lisinopril, enalapril, etc.) and angiotensin II receptor antagonists (e.g. losartan, valsartan, irbesartan) - can reduce proteinuria and slow the progression of nephropathies associated with more severe degrees of chronic renal failure.

Proteinuria is determined on a morning urine sample or 24-hour urine collection.

For the evaluation of protein in urine, a sample should be collected in a clean special container.
Urine is not affected by food, so there are no contraindications to whether the sample is taken fasting or after eating.

Situations that can distort proteinuria

Some non-pathological situations can give altered results of the urine protein dosage:

Consequently, urinalysis intended to check for proteinuria should be performed in the absence of these conditions.

The kidney is responsible for maintaining proteins in the body, so these should not be eliminated in the urine.
On the contrary, if the analyzes indicate their presence and if the fact is isolated, it could be due to urinary tract infections, drugs, intense exercise or stress, emotional or physical.
In some people, protein is present in the urine during the day and absent at night when the individual is lying down (orthostatic proteinuria).
If the presence of protein in the urine is constant, however, it could be a kidney disease such as, for example, acute and / or chronic glomerulonephritis. Protein in urine is, in fact, a wake-up call and can signal kidney damage. When organ compromise is established, protein concentration is generally associated with the severity of the damage; the increase in proteinuria over time indicates a worsening of the condition and a decrease in kidney function.
In pregnant women, high concentrations of protein in the urine may be associated with pre-eclampsia. For this reason, it is very important to periodically check this parameter during gestation.