La coagulative protein C it is a factor that participates in the formation of clots, limiting their extension. This enzyme is normally present in the blood, but its activity or quantity can be deficient for various reasons. A protein C deficiency can result, for example, from congenital factors, overconsumption, vitamin K deficiency, estrogen-progestogen intake or high levels of estradiol for induction of ovulation. 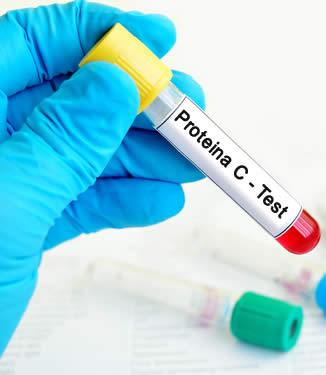 A quantitative alteration or dysfunction of this anticoagulant protein represents a risk factor for i thromboembolic phenomena.

Protein C participates in the coagulation process along with other factors; together with protein S and antithrombin III, it has the task of counteracting the excessive function of coagulation activity, keeping the blood fluid.
Protein C is synthesized by the liver and transformed into an active enzyme under the action of thrombin in the presence of calcium and phospholipids.
Under normal conditions, after damage to tissues or blood vessel walls, blood loss is blocked thanks to thehemostasis. During this process, the platelets adhere to the injured site, therefore the reaction that leads to the activation of the coagulation factors (coagulation cascade) is triggered. This leads to the formation of a clot that remains until the damage is completely repaired. When it is no longer needed, this sort of "cork" is eliminated.
Protein C cooperates with protein S to form blood clots. In particular, these two elements control the clot extension, inactivating specific coagulation factors (factor V and VIII); in other words, the function of protein C is to prevent excessive clotting.
If there is not a sufficient amount of C and S proteins, or they do not function adequately, clots can form uncontrollably. These situations can be mild to very severe.

Protein C, not to be confused with C reactive protein, is the most important blood anticoagulant; therefore it shares the same biological role of antithrombin III, even if the mechanisms of action of these proteins, both of hepatic origin, are different. The first is in fact independent of vitamin K, while protein C - which circulates in the plasma in an inactive form - requires adequate quantities of this micronutrient to be synthesized.

The main substrates on which protein C acts are factor Va and coagulation factor VIIIa. In the presence of thrombin, generated by coagulation, and thrombomodulin, present on the endothelial surface, protein C is converted into the active form, called precisely active protein C (Services, which again has nothing to do with C-reactive protein). Thanks to this structural modification, the active protein C also acquires a pro-fibrinolytic activity (promotes the dissolution of the clot), which it carries out through the inhibition of PAI-1 (plasminogen activator inhibitor).

Anti-inflammatory and cytoprotective activities are also ascribed to protein C.
Another protein, called protein S (APS), is a natural cofactor of APC, which is also vitamin K - dependent.
Finally, remember that thrombin (factor IIa) converts fibrinogen into an insoluble fibrin polymer, which participates in the formation of the clot. This pro-coagulant action contrasts with its ability to activate protein C, which therefore represents an endogenous control against the excessive activity of the coagulation system.

Testing for clotting protein C is done for:


To evaluate protein C, two types of tests are available:

This information can be useful in determining the type of deficiency, its severity and whether it is due to an acquired or hereditary defect.

The examination of coagulation protein C allows to measure its quantity and evaluate its functionality.
This analysis is generally indicated after an unexplained thrombotic event, as a support for the diagnosis of hypercoagulation disorders, especially in young subjects (less than 50 years old) and / or who have no other obvious reasons for this phenomenon.
Protein C testing may also be required for multiple miscarriages. Furthermore, it is very important to check the values ​​of this protein before taking oral contraceptives; in women at risk, estrogen and progestogen drugs could cause venous thrombosis or other cardiovascular disorders.
Evaluation may also be advised when a patient has a close family member who has an inherited protein C deficiency.

Note: the reference range of the exam can change according to age, gender and instrumentation used in the analysis laboratory. For this reason, it is preferable to consult the ranges reported directly on the report. It should also be remembered that the results of the analyzes must be evaluated as a whole by the general practitioner who knows the patient's medical history.

An increase in protein C can be observed in case of:

High protein C values ​​are not usually associated with medical problems and / or pathological consequences, therefore they are not considered clinically relevant.

Protein C deficiency or lack of activity may be due to:

Congenital deficiencies of protein C can be caused by:

Protein C deficiencies - congenital or acquired - result in hypercoagulability (or a prothrombotic state).

Protein C deficiency can have a congenital (hereditary) or acquired origin.
In the latter case they are typically associated with:

Often, in these acquired forms, the other anticoagulants, such as antithrombin III, are also decreased.
A protein C deficiency results in a reduction in the anticoagulant activity of the blood or, if you prefer, in a state of thrombophilia; as a result, the risk of abnormal clots (called thrombi) forming in the blood vessels increases. These "lumps" can go against spontaneous dissolution, grow to the point of obstructing the vessel in which they originate or break, migrating into a circulation and sometimes ending up occluding a smaller vessel. The most fearful consequences of this condition, called thrombosis, are heart attack, stroke and pulmonary embolism; it should be said, however, that arterial thrombosis is quite rare in the presence of protein C deficiency, which exposes above all to a greater risk of venous thrombosis and related consequences.
I hereditary protein C deficiencies are classified into:

In a completely exceptional way, the two conditions can coexist (particularly rare event in the population), causing serious thrombotic phenomena, sometimes with a fatal course, already at an early age, such as fulminant purpura in the newborn, deep vein thrombosis of the lower limbs and necrosis in association with the oral use of coumarin anticoagulants. The latter phenomenon may appear, absurdly, since at the beginning of therapy the pharmacological inactivation of protein C may be higher than that of vitamin K - dependent coagulation factors (II, VII, IX and X), with a consequent increase of coagulation mechanisms and necrosis of skin areas. In heterozygotes, the consequences of the deficiency are less severe and vary in intensity due to the possible presence of other predisposing factors, which may be endogenous (for example deficiency in other anticoagulant factors, such as anthrithrombin III, protein S, etc.) or external (surgery, use of oral contraceptives, pregnancy).
There is another hereditary disease, much more common than the previous ones (incidence 3 - 7% in the healthy population), characterized by resistance to activated protein C. In practice, protein C is activated normally but fails to adequately inhibit coagulation factors Va and VIIIa. Therefore, if increasing concentrations of activated protein C are added to a blood sample taken from a resistant subject, there is no adequate prolongation of the clotting time (as it is logical to expect). Responsible for this anomaly is in the vast majority of cases (more than 90%) a mutation in the Factor V (Factor V Leiden), which involves an amino acid substitution in the mature protein. The repercussions of resistance to activated protein C also depend on the overlap or not of other factors, such as those responsible for acquired deficiencies (pregnancy, trauma, surgery or use of oral contraceptives). Factor V Leiden is the most common cause of genetic thrombophilia and specific tests exist in the analysis laboratories to diagnose this condition of resistance to the action of active protein C; if necessary, the therapy uses anticoagulant drugs.

Protein C testing is done on a venous blood sample taken from the arm.