PROTEASE (or peptidases): hydrolytic enzymes involved in protein digestion.With their action, proteases are able to break the peptide bonds that unite the various amino acids and from whose repeated concatenation the protein molecules originate. 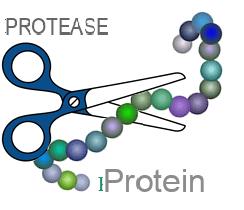 Proteases of the digestive tract, synthesized in the stomach, pancreas and intestinal mucosa, are divided into endopeptidases and exopeptidases. Taken together, these enzymes are essential for the digestion of food proteins, which are reduced to molecular fragments small enough to allow their absorption.

Proteases used for the digestion of food-borne proteins represent only a small part of the large family to which they belong. If we think that enzymes, like many hormones, are molecules of a protein nature, we realize how important the role played by proteases is. What better way to regulate the activity of these molecules than to degrade them if necessary through specific proteases? Hence, the cells of the immune system contain proteases to digest the cell membrane of foreign microorganisms, which in turn (we are talking about bacteria) have on the one hand the ability to secrete proteolytic enzymes to invade the cell and on the other hand to release protein toxins (exotoxins) from which we must defend ourselves. Some plasma proteases, such as antithrombin III and plasmin, play an important role in coagulation, preventing an excessive activation of this mechanism, which is instead enhanced by thrombin (also belonging to the large family of proteases).


The modulatory action of the proteases is therefore fundamental in the regulation of the various bodily functions; if, for example, abnormal proteins originate from protein synthesis, it is very important that they are degraded as soon as possible. Similarly, in wound healing, scar tissue cannot grow indefinitely, but must be limited by specific proteases. Furthermore, if we consider that proteases degrade and destroy protein molecules, we must expect that there are factors, including other proteases, capable of regulating their function and thus preventing the exalted proteolytic phenomena from ending up causing damage to the tissues of the organism. .

Proteolytic phenomena affecting the muscle fibers are activated by fasting and prolonged physical exercise in order to produce energy and glucose starting from some glucogenic amino acids.

Plant proteases are also synthesized by plants in order to defend against pathogens, degrade peptides and modify the structure and function of other proteins. The pineapple stalk (bromelain), papaya (papain) and sprouted seeds (barley malt) are particularly rich in it. The ingestion of these foods or their extracts helps to regulate digestive function, assisting the action of the endogenous proteases released in the digestive tract.