The diet for proctitis is a diet aimed at reducing the symptoms of this disease; on the other hand, it has no effect on the resolution of the triggers affecting it.

Proctitis is a disease characterized by deep inflammation of the rectal mucosa (inner lining of the rectum). 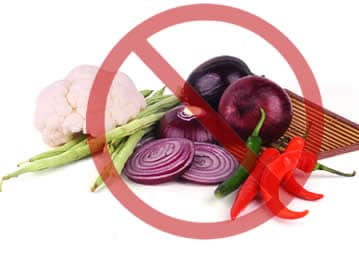 The Proctitis Diet should be free of Irritating Foods such as garlic, onion, chilli, horseradish and coffee

12-15 centimeters long, the rectum represents the last stretch of the large intestine, between the anus and the sigma.

Proctitis has a very varied etiology; it can in fact be caused by:

The most frequent infectious cases are venereal lymphogranuloma caused by the bacterium Chlamydia trachomatis and herpes-proctitis caused by the Herpes simplex virus (1 and 2); other bacteria involved are: Neisseria gonorrhoeae (see gonorrhea) and Syphilitic proctitis (see syphilis).
Two common circumstances in which the transmission of the microorganisms responsible for infectious proctitis occurs are:

If the bleeding is severe, it is possible that an anemic picture may arise with the classic symptoms of: paleness, irritability, weakness, dizziness, brittle nails and breathlessness.

The diagnosis of proctitis occurs by internal investigation of the rectum with a proctoscope or sigmoidoscope.
For the identification of any pathogens, the doctor can carry out sampling of the feces and biopsy for microscopic examination.
Colonoscopy and x-ray analysis with barium enema are used to ascertain the possible presence of Crohn's disease or ulcerative rectal colitis.
Treatment of proctitis varies according to the severity and etiology.
In case of bacterial infection, the most advisable drugs are of the antibiotic type. If proctitis is secondary to a chronic inflammatory disease (Crohn's disease or ulcerative rectal colitis), the doctor may prescribe 5-aminosalicylic acid (5ASA) and corticosteroids, applied directly on site (suppositories, enemas) or taken orally. in the form of tablets. Topical application is generally more effective, but in some cases the combination of both solutions is preferable.

The proctitis diet is a balanced nutritional scheme that acts as a palliative. In practice, also thanks to the use of certain food supplements, it avoids the worsening of symptoms and prevents complications during drug treatment; however, it cannot be considered a decisive intervention.
The proctitis diet is based on three basic principles:

Moreover, in case of concomitant proctitis with celiac disease, it becomes absolutely essential to avoid gluten as carefully as possible.

As anticipated, the proctitis diet must be high in soluble fiber. These are essential for maintaining the state of fecal hydration and improving transit within the colon.

Soluble fibers are found in products of plant origin, in particular in vegetables, fruit, algae, legumes and certain seeds.

In case of proctitis it is also advisable to use laxatives based on soluble fibers such as, for example, "Metamucil". It is a food supplement containing psyllium breasts, more precisely their outer integument, which provides up to 70% of soluble fiber (mucilage).
Other soluble fibers that boast a similar intestinal effect are agar agar (another mucilage), inulin (fructose polysaccharide extracted, for example, from chicory or agave) and glucomannans (mannose and glucose polysaccharide, extracts from an oriental tuber).

Irritants are molecules of various kinds contained in foods and beverages. Among these we mention:

Of the first group the following are to be avoided above all:

From the Stimulants group it is essential to avoid:

Of the third and last, it can be very useful to eliminate the amount of harmful toxic molecules such as: polycyclic aromatic, acrolein, formaldehyde and acrylamide. To do this, it is absolutely essential to limit the cooking systems, excluding those that are too intense which can carbonise (even only partially) the energetic macronutrients.


However, cooking methods such as:

It is also advisable to reduce the amount of saturated fat in the diet. These nutrients are mainly contained in foods of animal origin, such as cheeses and certain meats (including sausages, cold cuts, etc.).

We remind you that this reduction is related to the fraction of saturated fatty acids but not of the total ones; in fact, the distribution of the diet against proctitis remains completely unchanged with respect to the nutritional balance standard and must guarantee a lipid portion of 25% of the total energy.

To make up for the reduction in saturated lipids, it is possible to proportionally increase the portion of the seasoning oil, preferably based on extra virgin olive oil.

As anticipated, some forms of proctitis appear to be related to celiac disease. It is an autoimmune disease characterized by intolerance to gluten taken with food.
Consequently, in case of suspected or full-blown celiac disease, the doctor can suggest a diet for proctitis which - in addition to respecting the requirements we have already talked about - will also be free of foods containing gluten: durum wheat, soft wheat, spelled, spelled. , barley, oats, kamut, sorghum, triticale and all related derivatives.

Other articles on 'Proctite Diet'