Blood pressure tends to decrease significantly and progressively during the first months of pregnancy, and then stabilize and slowly rise to pre-pregnancy levels in the last trimester of gestation.

Despite the difficulties in establishing ideal reference values, the optimal diastolic level seems to be around 75 mmHg in the first and second trimester, and 85 mmHg in the last two - three months of pregnancy. 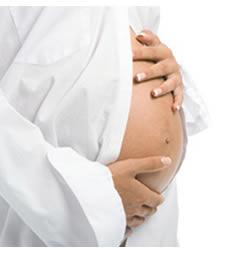 Of course, after conception it takes a few weeks for the pressure to progressively decrease to the typical values ​​of the first and second trimester.

Responsible for this physiological pressure drop is a set of factors, including the reduction of peripheral resistance (vasodilation), which prepares the body for the increase in blood volume, with an increase in glomerular filtration rate and cardiac output. The increase in this last parameter, which represents the amount of blood expelled from the heart in one minute, is subordinated to both the increase in heart rate and systolic output.

In pregnant women, a large part of the blood flow is localized in the utero-placental area, where the exchange of nutrients, gases and waste substances between the maternal and fetal blood takes place, without direct contact between them. It is no coincidence that the placenta is richly vascularized and receives up to 10% of the total maternal cardiac output (about 30 liters / hour). For these exchanges to occur it is necessary that the pressure at the placental level is low; we are therefore talking about a deciduous organ with low resistance (it does not significantly oppose the free flow of blood).

Unfortunately, it can happen that due to abnormal development the placenta opposes excessive resistance to the blood flow, inducing an increase in pressure upstream. In these cases we speak of pregnancy-induced systemic arterial hypertension, or simply gestational hypertension. This condition is potentially dangerous for both the health of the mother and the fetus, so much so that in extreme cases it can seriously endanger the life of both. When hypertension (≥ 20/140 mmHg) is accompanied by proteinuria (loss of protein in the urine) after the 90th week of pregnancy, doctors talk about preeclampsia, whose symptoms and predisposing factors are shown in the table.

The low levels of pressure that characterize the first two months of pregnancy expose the woman to a greater risk of dizziness and fainting, but also to varicose veins and varicose veins, and to a generalized sense of weakness. The risk of having to deal with these problems mainly affects women who are overweight or who already suffered from some ailments attributable to low blood pressure before pregnancy. Unlike gestational hypertension and preeclampsia, however, when the pressure in pregnancy is too low there is no need to worry, as it is a physiological condition (obviously within certain limits).


For all these reasons it is essential that blood pressure values ​​are monitored at each medical check-up during gestation, but also on a weekly basis by the expectant mother, who will take care to note the values ​​and immediately report any anomalies to the gynecologist.

Audio Video Pressure in Pregnancy
How is pressure measured? ❯